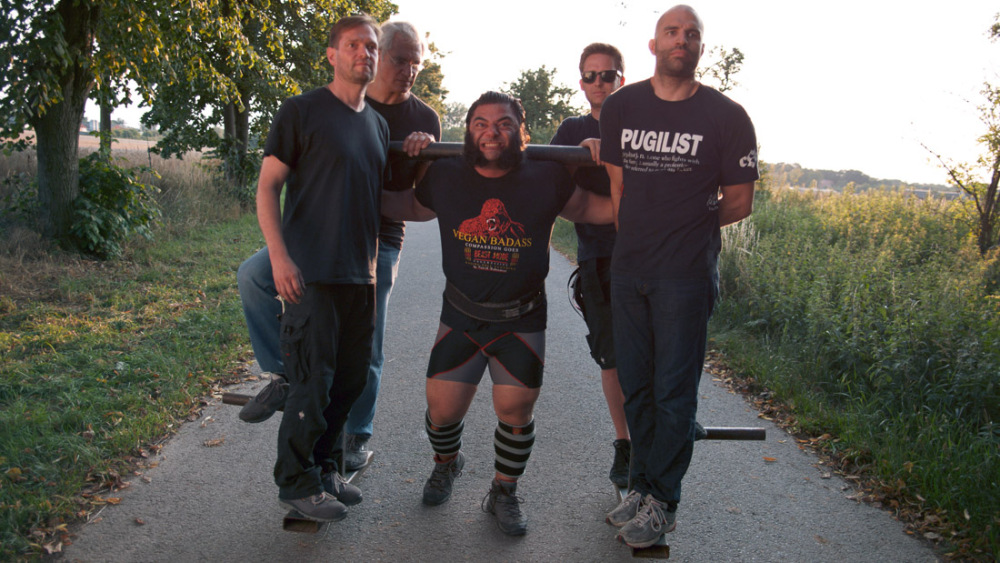 With its sharp, rapid editing, colorful action photos, and testimonies of people in the sports field, “The Game Changers” comes across with a thesis that’s not only convincing and entertaining but perhaps the one movie this year that could change your life. Director Louis Psihoyos is known here for his stunning 2009 movie “The Cove,” which might have garnered some death threats by exposing Japanese who trap dolphins (“Who is this foreigner to tell us how to run our country?” replies one opponent). He now puts quite a positive spin on the value of changing to a plant-based diet. While subjects like Arnold Schwarzenegger rivet attention, urging vegans and vegetarians not to ask people to change over quickly from meat products to plant foods (try one meatless day a week, he suggests), other athletes who have made a full correction to abolishing meat, fish, eggs, and cheese seek to prove to us that they are stronger, have more endurance, and most important have stiffer erections than those of us in the majority who cannot imagine giving up the carnivorous pleasures.

“The Game Changers” is not one of those PETA-style broadsides showing naked models saying captions “I’d rather go naked than wear fur.” Nobody is hit over the head with how evil we are if we damage our own bodies while destroying the ecology through supporting the livestock industry. The folks who populate the movie keep the pressure low but imply “Just look at me and what I can do, and I do this not only while avoiding steak, eggs, cheese and milk but actually because I have sworn off these products.

Comments by rough, tough athletes are frequently segued to scientists like Dr. Caldwell Esselstyn who do not simply tell us about the dangers of meat but do so with videos and graphs, the most impressive being two pictures shown by Esselstyn’s son Rip, one of arteries clogged and looking as though serial killers have mutilated them beyond description and contrasting this with a picture arteries that are bright and clear.

We have been worshipping meat for nutrition as well as taste, proclaiming the virtues of a Big Mac or a Popeye Fried Chicken, but chickens, cows, lambs and pigs are only intermediaries who have consumed vegetation and who pass on to us the protein in those plants. The two most impressive subjects are sprinter Scott Jurek, who set a new world record in running a one-man marathon across the entire Appalachian trail, and Patrik Baboumian, who likewise made the Guinness Book of Wrold Recrods by lifting over one thousand pounds and walking several feet while doing so.

As for experiments, the most involving finds three football players who are first give meat and told to get a night’s sleep with two bands placed around each of their penises and the next day given only plant food. The study found that the plants increased both the size of sleep-time erections and their hardness. So when PETA says that vegans are sexier, here’s the beginning of actual proof that a plant based diet is good “for people who have penises and for those who like people who have penises.”

“The Game Changers” arrives at theaters just days after the opening of Morgan Spurlock’s “Super Size Me 2: Holy Chicken,” which is not about super-sized penises but about the world-wide dangers caused by the poultry industry. Both films are among the most important you may see in 2019.