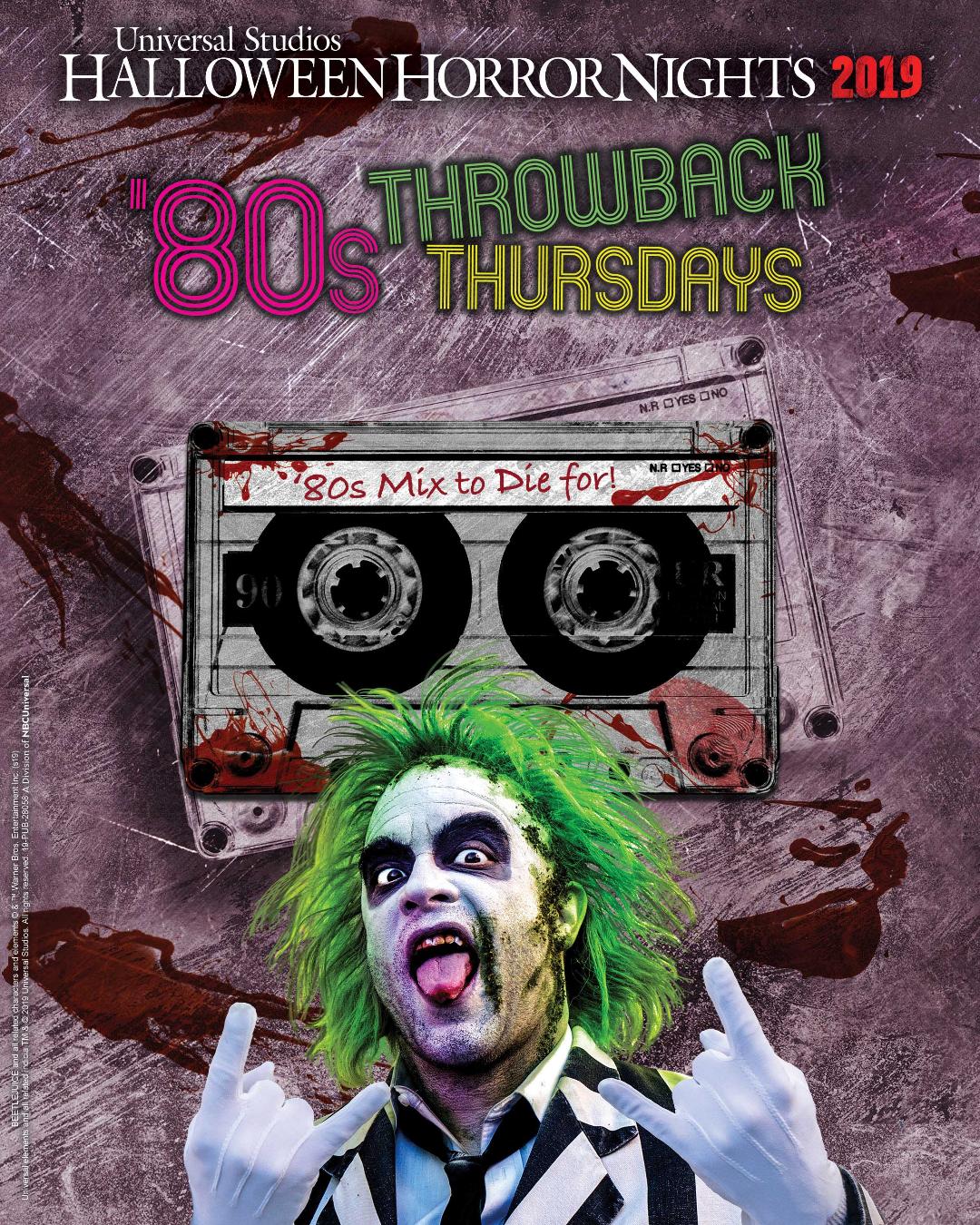 Halloween Horror Nights at Universal Studios Hollywood is time traveling back to the 1980s with Throwback Thursdays, in celebration of the decade’s darker side. The event will feature several all-new terrifying mazes that honor such classic movies from the decade as ‘Ghostbusters,’ ‘Creepshow’ and ‘Killer Klowns from Outer Space.’ Contemporary shows and films inspired by the decade, including ‘Stranger Things’ and ‘Us,’ will also come to life during the Halloween-inspired attraction.

Highlights of Throwback Thursdays include a not-so-friendly welcome from Chucky himself, live tribute band and DJ dance party hosted by Beetlejuice, classic ‘80s music videos and songs played throughout the event, as well as themed food. To help guests capture the spirit of the ’80s, they are also invited to sport their finest decade-worthy attire trends, from leg warmers and high waisted jeans to scrunchie hair ties, fanny packs and shoulder pads.

Tickets are available at Halloween Horror Nights’ official website. Advance purchase is recommended, as event nights are expected to sell out.

This year’s Halloween Horror Nights maze and attraction lineup includes: ‘Us,’ an all-new maze based on the blockbuster film from Universal Pictures and visionary Academy Award-winning filmmaker, Jordan Peele; ‘Ghostbusters,’ Sony Pictures’ classic 1984 film, comes to life for the first time ever in this all-new maze; a ‘Stranger Things’ maze, which is based on seasons 2 and 3 of Netflix’s critically-acclaimed supernatural thriller television series; ‘Killer Klowns from Outer Space,’ the popular 1980s horror sci-fi film, lands at Halloween Horror Nights in an all-new chilling maze; ‘Creepshow,’ whose maze is inspired by the 1982 cult classic movie directed by George Romero and Shudder’s brand new anthology series, which is reimagined by acclaimed make-up artist, director and executive producer, Greg Nicotero; ‘Frankenstein Meets The Wolf Man’s mazie is inspired by Universal‘s original cinematic monsters and the movie studio that invented the horror film genre; the maze for ‘House of 1000 Corpses’ is inspired by Lionsgate’s 2003 cult classic film that was directed by multi-platinum recording artist and filmmaker, Rob Zombie; ‘Holidayz in Hell’ has inspired an all-original maze that features demented versions of everyone’s favorite seasonal celebrations; ‘Curse of Pandora’s Box’ has an all-new original maze that’s based on the twisted Greek mythology tale; ‘The Walking Dead’ has launched a permanent attraction at Universal Studios Hollywood that’s inspired by AMC’s popular television series; and The Jabbawockeez, the award-winning hip hop dance crew, returns by popular demand with an all-new, high-energy performance that was created exclusively for Halloween Horror Nights.