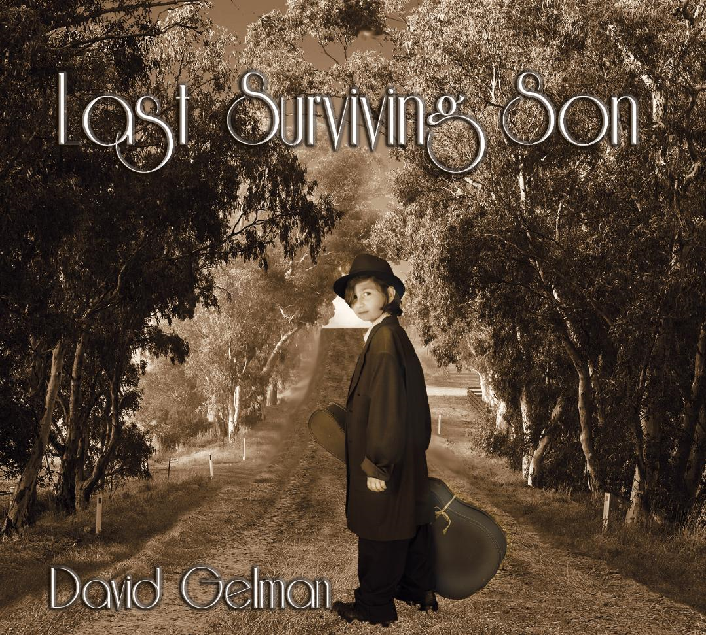 Reflecting on meaningful life experiences, including love gained and lost, the deaths of friends and relatives, and the appreciation of all the things that they’ve learned along the way, is a vital process for all musicians while they’re crafting songs. Singer David Gelman is doing just that with his new 13-track third album, ‘Last Surviving Son.’

The compelling country-Americana-folk tunes, which were recorded at the renowned Dreamland Recording Studios near Woodstock, feature moving, soulful melodies of the New York City-based musician’s songwriting in a way that exceeds all expectations. Gelman penned heartfelt, emotional tracks for the long-awaited follow-up to his second record, 2013’s ‘Undertow,’ which will surely leave a lasting impact on its listeners, and how they ponder their own life experiences.

‘Last Surviving Son’ begins with the captivating, soulful country-folk-inspired entry, ‘Far Away,’ which chronicles the musician’s growing weariness of leading a life on the run. Driven by an astonishing violin in the background, the song features a infectious rhythm that will surely capture listeners’ attention right from the beginning. Gelman’s tender, expressive voice emotes his feelings of hoping he’ll eventually find his grace, especially as he chases his dream of being appreciated and creating a steady lifestyle.

The singer’s latest album then transitions into its sophomore track, ‘Set It Free,’ which is driven by expressive, passionate instrumentation. Supported by cathartic guitar strumming, Gelman’s textured vocals offer a sweet serenade. While the tune features a slow, mellow tempo, it’s still driven by an energetic beat that supports his motivation to free himself from his troubled past.

Another notable and memorable entry on ‘Last Surviving Son’ is its title song, which is the fifth tune on the track list. The poignant folk ballad highlights the singer’s legacy, especially after the harrowing, unfortunate deaths of some of his relatives. The entry’s narrative was inspired by the passings of Gelman’s father and brother, and is driven by the musician’s questioning of if he can change the past.

The stunning blend of the commanding and relaxed nature of the musician ‘s vocals as he croons about moving on, and finding peace in his at-times judgment-fueled reflection of his past, shows his ultimate appreciation of his family. ‘Last Surviving Son’ is a relatable pondering of what people must go through as they move on from the difficult emotional situations in their lives.

Another standout song on the singer’s new record is its eighth track, ‘Let It All Go,’ which is driven by a SoCal country melody. The calming, gentle nature of Gelman’s vocals infuse the lyrics with a compassionate significance, as he croons about the importance of people opening their hearts and revealing their true selves, as he guides them to a more freeing life experience.

‘Last Surviving Son’ begins to wind down with its penultimate entry, ‘My Vows to You (The Wedding Song).’ The tune features the musician playing equally soulful and sentimental acoustic guitar and strings, which support his tender vocals. As the title suggests, the track is the perfect wedding song, as he proclaims that if the person in his life falls, he’ll be there to catch them. He also lovingly notes that he’ll always be by the side of the person he married, even after they lived their full lives, as their love will never die.

Gelman’s latest album comes to an end with the spiritual entry, ‘Presence of the Lord,’ which seems to have been written from the deepest part of his soul. While he admits that he’s not a religious person, the closing song were taken from a particularly spiritual moment he had in the Amazon with his fiancée. While in the jungle, he wondered if there was something out there that was bigger than him, as he could also see his future right in front of him.

Driven by an all-encompassing blend of the piano and guitar, he also croons that he’s grateful that the title presence guides him, particularly to the answers of life’s true meaning. The triumphant tune reflects the full circle of the musician’s life, as he asks for forgiveness for all of his transgression. With its powerful message and stunning mix of Gelman’s vocals and the overall instrumentation, ‘Presence of the Lord’ has the potential to become a commercial hit on religious radio.

Contemplating lasting life experiences, including love gained and lost, the deaths of friends and relatives, and the appreciation of all the things that they’ve learned during their lives, is a vital process for all musicians while they’re crafting songs. Gelman is doing just that with ‘Last Surviving Son.’

The 13 compelling country-Americana-folk tracks feature moving, soulful melodies of the musician’s songwriting in a way that exceeds all expectations. Gelman penned heartfelt, personal tunes for himself for his third record, which will surely leave a lasting impact on its listeners, and how they ponder their own life experiences.