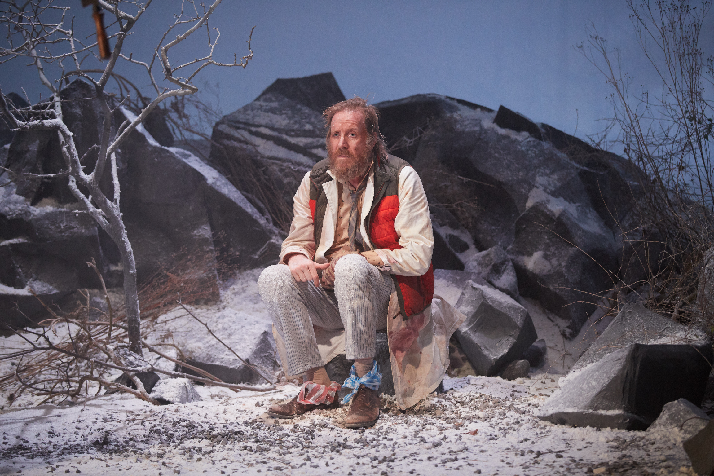 ‘On Bear Ridge’ by the NTW and Royal Court Theatre. Photo by Mark Douet. Rhys Ifans as John Daniel.

‘On Bear Ridge’ is a semi-autobiographical play written by Ed Thomas — playwright, director and producer, from Cardiff whose work has been widely distributed to over 80 countries. Presented by National Theatre Wales and the Royal Court London, the show is co-directed by the playwright alongside Royal Court Artistic Director Vicky Featherstone.

This delicately compelling story is about the places we leave behind, the indelible marks they make on us, and the unreliable memories we hold onto. The author seems to have his lead character voice out the Welsh concept of ‘Hiraeth,’ i.e. the nostalgia towards a time, an era, or a person that is no more. This idea of homesickness for what may no longer exist, is set in a a lost village, blurred by redrawn borders, nowhere to be found on the map.

It is Bear Ridge, where after a hundred years, the family butchers and grocers – a place for odds and ends, contraband goods, and the last petrol pump for 30 miles – is now silent. But owners John Daniel (Rhys Ifans) and Noni (Rakie Ayola) are not leaving, nor is their assistant Ifan William (Sion Daniel Young). They are defiantly drinking the remaining whiskey and remembering good times, when everyone was on the same side and the old language shone. The way Ed Thomas expresses this linguistic issue is declined in various poetically disquieting ways. A jabberwocky of butchery terms plunge us into the story, as we traverse the main character’s turmoil caused by the forgotten tongue. Into the lives of this dignified defiance enters a Captain (Jason Hughes), who will contribute to a chronicle of family losses and introspective lyricism.

Rhys Ifans delivers a wistful interpretation, as he personifies the feeling of longing for a homeland that his ancestors lived upon, and his reminiscence of a radiant land that we are no longer certain ever existed within this apocalyptic scenario. There is exceptional dramatic chemistry between him and Rakie Ayola, who embodies the strength of womanhood, enduring through adversities. Just as overwhelming is Jason Hughes’ depiction of the Captain, who gets lost on a snowy hillside and overturns the wobbly balance that John Daniel and Toni have established in their quest to survive. Sion Daniel Young includes bittersweet comic relief in this witty play. Despite it is heart-wrenching, you will laugh for the acerbic humor, as you will emphasize with all of the characters’ Sturm Und Drang.