The dark descent into madness often creates a hypnotic and stunning battle of wits between an uplifting superhero and their seemingly unstable archnemesis. That’s certainly been the case for Batman and one of his top enemies in Gotham, the Joker, since the two characters first appeared in the 1940 debut issue of the comic book, ‘Batman,’ which was published by DC Comics.

But the harrowing relationship between the admirable superhero and the mischievous supervillain has been reexamined, and almost reversed, in the origin story of the title character in the newly released psychological thriller, ‘Joker.’ The film, which was distributed into theaters on October 4 by Warner Bros. Pictures, has just passed the $1 billion mark at the international box office. The drama is garnering acclaim because worldwide viewers are relating to the anti-hero’s downward spiral, which is partly the result of the effects that society has had on him.

Filmmaker Todd Phillips, who previously made a name for himself in the comedy world when he wrote, directed and produced such hits as ‘The Hangover’ trilogy, ‘Due Date‘ and ‘Old School,’ decided to switch over to the thriller-drama genres with his latest movie. He helmed, produced and, along with Scott Silver, co-scribed the script for ‘Joker.’

Phillips offers a new perspective on a comic book screen adaptation with ‘Joker.’ The plot chronicles how a deteriorating political and social environment negatively impacts the life of someone who’s already mentally ill, which leads them to feel at times that the only way they can survive is to turn against the people who claim to want to help them, but are ultimately only doing more harm than good.

In the wake of the thriller’s box office success, Phillips generously took the time recently to participate in a post-screening Q&A panel with Oscar-winning documentarian, Michael Moore in New York City. The ‘Joker’ filmmakers discussed such topics as Joaquin Phoenix’s thorough preparation for his portrayal of the title role, the experience of filming the movie on location throughout New York and the police and public’s fear of real-life violence possibly being provoked throughout America during the drama’s opening weekend. In the above clip, Phillips and Moore speak about the decisive split amongst the media about the story’s violence, and the effect that it has on audiences. 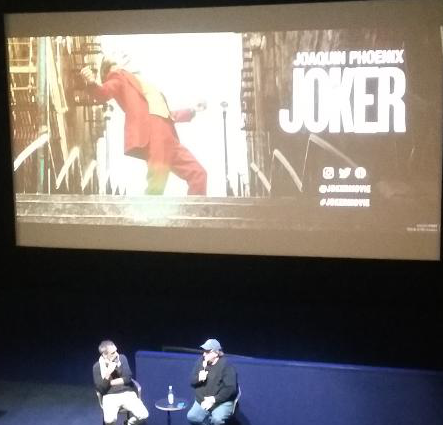