Turning her strong-willed maverick personality into a successful career has become BAFTA-nominated actress Felicity Jones‘ signature in recent years. From her Academy Award-nominated turn as Jane Hawking in the 2014 biopic, ‘The Theory of Everything,’ to her performance as the late Ruth Bader Ginsburg in the 2018 legal drama, ‘On the Basis of Sex,’ the actress repeatedly proves that she flourishes playing inspiring, nonconformist real-life women. In her latest biographical film, ‘The Aeronauts,’ she portrays Amelia Wren, the pilot of nineteenth century English meteorologist, James Glaisher, who ultimately proves how her radical actions helped advance women’s place in science.

The movie is based on the 2013 book, ‘Falling Upwards: How We Took to the Air’ by Richard Holmes. The screen adaptation was directed and produced by Tom Harper, who also worked on the story with screenwriter Jack Thorne.

Amazon Studios will release the action adventure drama in theaters tomorrow, December 6, and then on Prime Video on December 20. The movie’s official distribution comes after it had its world premiere at the Telluride Film Festival, and then screened at the Toronto International Film Festival, this summer.

Set in 1862, ‘The Aeronauts’ follows daredevil balloon pilot Amelia as she teams up with James (Eddie Redmayne) to advance human knowledge of the weather and fly higher than anyone in history. While breaking records and advancing scientific discovery, their voyage to the very edge of existence helps the unlikely pair find their place in the world they have left far below them. But they face physical and emotional challenges in the thin air, as the ascent becomes a fight for survival.

Jones generously took the time yesterday to sit down for an exclusive interview at New York City’s Roxy Hotel to talk about starring in ‘The Aeronauts.’ Among other things, the performer discussed how she was immediately drawn to play Amelia in the biopic because she’s an adventurous and spirited woman who has a strong emotional arc. She also mentioned that she also enjoyed reuniting on screen with Redmayne, who she previously starred with in ‘Theory of Everything,’ as well as working with Harper as the director, for ‘The Aeronauts,’ particularly in creating the relationship between Amelia and James.

The conversation began with Jones discussing how she became attached to play Amelia in the film. “I initially heard about it through my agent, who told me about this project called ‘The Aeronauts,’ and I thought it sounded intriguing. Then when I started reading the script, I was blown away by the character, and thought what a brilliant wildcat of a woman she would be to play,” she shared. “She was so adventurous and spirited, and has a strong emotional arc.

“I then heard that Eddie was interested in the film, as well, so we got on the phone with each other. Knowing that he may be involved made it more appealing. It felt like it would be a wonderful way to build on what we had on ‘The Theory of Everything,'” Jones added.

The actress then delved into what kind of research she did once she committed to star in ‘The Aeronauts.’ “It was really helpful to look at other aeronauts, and understand what it takes to be someone like Amelia Wren,” she admitted. “So I looked into Sophie Blanchard, who Tom and Jack said was an inspiration to them while they were writing the script. She was quite a wonderful historical figure; she used to fly balloons low and at night, and was obsessive about creating the right shape. She was also a great inspiration to Amelia.”

Further speaking of the research she did into her role in the drama, Jones noted that she enjoys portraying real-life women on screen, and explained what her process is like of relating to her characters. “I like to find the reality in whatever I do. With whatever character you’re playing, you want to meet someone in real life who has those same qualities, because it gives you the foundation for playing the character. There’s a wonderful combination in ‘The Aeronauts’ of being factually-driven, in terms of the inspiration behind it, and also having so much fantasy, adventure and wonder in it,” she shared.

The experience of reuniting with Redmayne on ‘The Aeronauts’ was something that the actress truly appreciated, like she previously mentioned. “It was so easy. Since this film operated almost like a small indie and a big spectacle at the same time, to be able to work with someone with whom I already had so much emotional honesty with, and been through what the characters in ‘Theory’ went through, made working together on this film so much easier. He’s a brilliant actor, and I love the fun of performing with him,” she gushed about her two-time co-star.

Besides Redmayne, Jones also cherished the opportunity to collaborate with Harper as the director of the movie. “He has a very precise eye, and gets wonderful, authentic performances from his actors. He has a great sense of naturalism. He and I had wanted to work together for many years, but it was just about finding the right project,” she gushed as she praised the filmmaker.

The actress also enjoyed the process of creating the physicality for her role of Amelia. “I love that side of things. I have naturally always liked being a bit of a dare-devil and trying things out, and I love the adventure and challenge of it. I also love preparing with the stunt team,” she shared.

Further speaking of the physicality and stuntwork, Jones and Redmayne were able to shoot their scenes together in an actual balloon. “It’s always magical when you walk into a set and see a huge balloon about to take off in the middle of a field, and know you have to get into that balloon,” she noted. “I love the people who are involved in filmaking, and pull together to achieve something. Everyone has a defined role and tasks in a specific department that they have to carry out. It’s wonderful camaraderie.”

Another physical aspect of the performer’s character that she enjoyed creating was her look, particularly through her costumes, hair and make-up. “It was important to make the costumes feel very real. Alexandra Byrne, the costume designer, and Jenny Shircore, the hair and makeup designer, are brilliant at what they do-they’re both Oscar-nominees,” she shared.

“With the costumes, we wanted to create a practicality for her movements. Jenny also wanted Amelia to feel very natural and unkempt, and not too prissy or vain; she doesn’t care about her hair when she jumps into the balloon,” Jones divulged.

One of the most important lessons of ‘The Aeronauts’ is that Amelia embodies a strong sense of female empowerment. The actress noted that she feels it was vital to include that message in this type of movie. “I love people who don’t conform and play by the rules; they do their own thing and take risks. We need those mavericks in society, and I take great joy in playing them,” she admitted with a hint of a laugh.

Jones also divulged that she hopes viewers enjoy spending time with her character of Amelia while they’re watching the biopic. “She’s a lovely character, but she is flawed, like all of us. But I think the film is very optimistic and full of wonder and exploration, and shows what it means to escape,” she concluded. 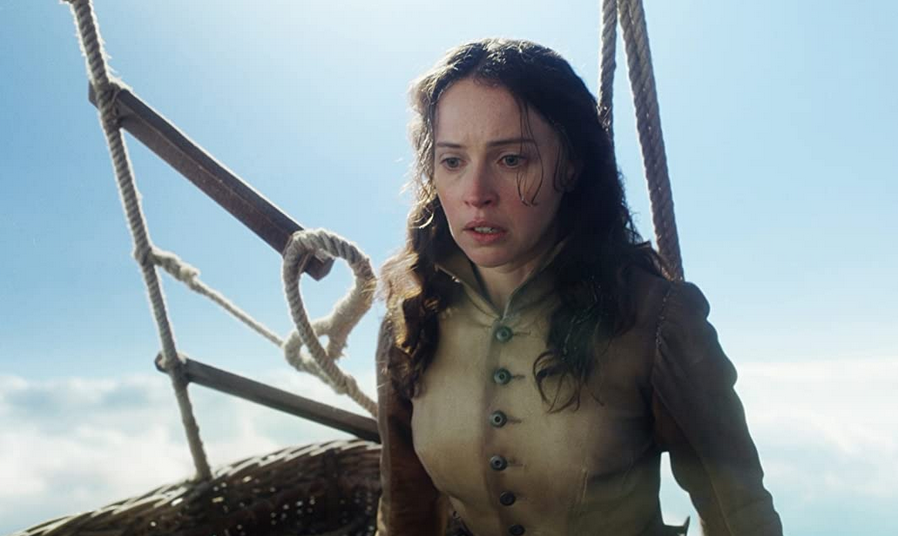