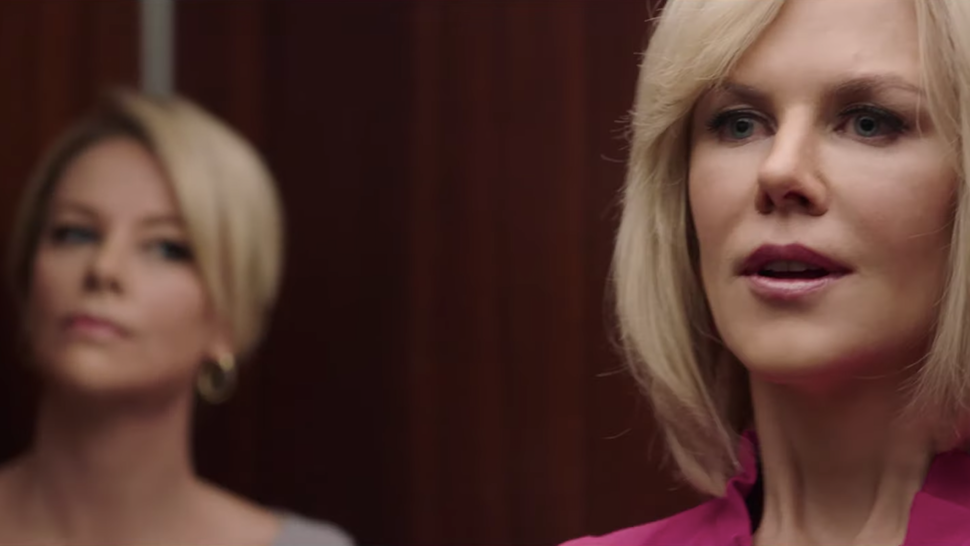 In “Bombshell,” Charlize Theron delivers an Oscar-worthy performance as Megyn Kelly, a larger-than-life lawyer best remembered for her aggressive questioning of candidate Donald Trump who replied when she cited Trump for calling women dogs, pigs and bimbos, “You could see there was blood coming out of her eyes. Blood coming out of her wherever.” This is the kind of programming, perhaps, that made Fox the number one cable news program in America. The picture as whole, though, is directed in a pedestrian way by Jay Roach, whose “Trumbo” was a devastating look at screenwriter Dalton Trumbo who in 1947 was blacklisted for his leftist political beliefs. Except for a documentary-style run showing events during past years, “Bombshell” follows a chronological trajectory, the style used by documentary filmmakers, but Michael Moore could probably make a doc with more biting satire and a boatload of humor that is largely missing from this film.

Roach uses a screenplay by Charles Randolph, whose “The Life of David Gale” is generally considered a flub but whose “The Big Short” is a dynamic piece of muckraking exposing financiers on Wall Street who actually hoped that their clients would be unable to pay their mortgages. The current movie is anchored by three women, all blondes with fine figures, which Fox demands of its frontline news people. Charlize Theron serves as first among equals in the role of Megyn Kelly, who turned to journalism after a career as a corporate defense attorney and was included in the Time magazine list of the 100 most influential people. Her career town a sharp turn downward following her accusation that Roger Ailes, here played by John Lithgow complete with the jowels and triple chin of the news boss from the second floor and who is so large that he needed a walker to get around. Kelly accuses the late Roger Ailes of trying to kiss her on the lips, noting that Ailes freely told her that she has to play ball with him behind locked doors if she wants to unlock her career with Fox.

As Gretchen Carlson, Nicole Kidman portrays the journalist and author, also called by Time Magazine among the 100 most influential people in the world in 2017. Like Kelly, she accuses Ailes of harassment, shown here almost desperate in her goal of attracting the testimonies of other women who had been approached by the news boss in similar unsavory ways. She is perhaps the person most able to show that her testimony is not simply lies in order to collect a fat paycheck, suing Roger Ailes directly rather than Fox News, and signing up some twenty additional women with similar tales of sordid behavior.

For her part Kalya Pospisil, played by Margot Robbie, is stunned when called into Ailes’ second-floor office, eager to move up to “the front of the line” in news broadcasting, only to be commanded to life her skirt higher, and “no, higher,” “higher,” by Ailes, sitting comfortably behind his large desk, his breath seeming to come in greater spurts as Kayla, with considerable ambivalence, does what she is told.

The performers are made up to look quite like their real-live counterparts in much that Saturday Night Live has been able to disguise Alec Baldwin as Donald Trump and Kate McKinnon (also appearing here as a closeted lesbian) as KellyAnne Conway, Ruth Bader Ginsberg, Rudy Giuliani and Hillary Clinton among others. Malcolm McDowell gets a small but important role as Rupert Murdoch, the boss of bosses stationed on the eighth floor of the Fox building (filmed by Barry Ackroyd in Los Angeles). Though a big supporter of Ailes, even he turns against the man, refusing even to appear with him to announced Aiels’s dismissal from Fox, though he did hand over a handsome severance check, sending him off on a lavish party.

Fox News, with the slogan “Fair and balanced,” is clearly within the Republican-conservative view of politics, favoring free trade, an anti-abortion platform, and strong family bonds. Hypocrisy abounds, however, beyond the purview of this film, as accusations mounted up against Fox News Latino vice president Francisco Cortes who tried to coerce Tamara N. Holder into performing oral sex, Bill O’Reilly, whose show sporting combative, right-wing propaganda, is canned with the network’s settling with Juliet Huddy, including the firing of Fox sports president Jamie Horowitz.