The Song of Names Movie Review 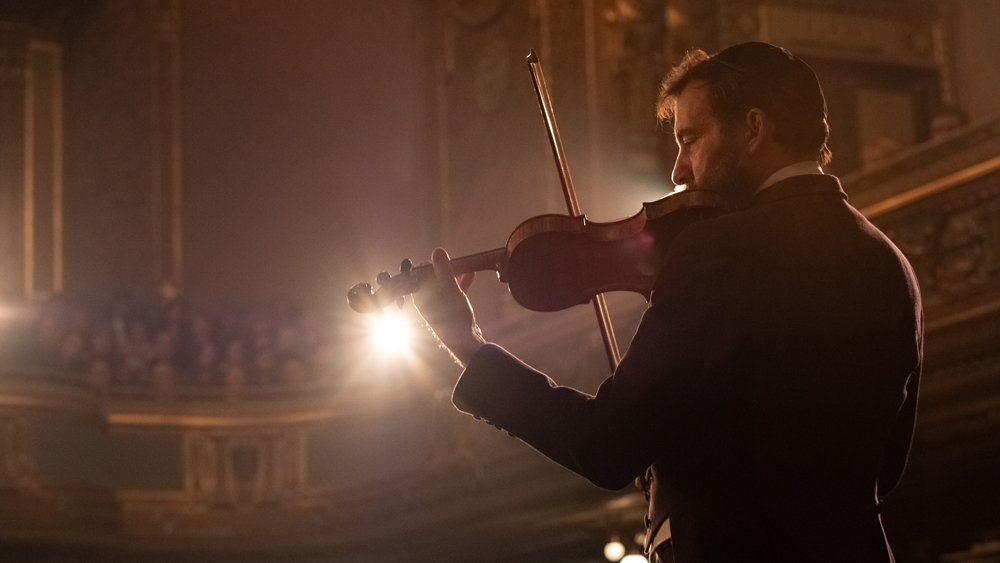 It’s not all that unusual for people to disappear. Men run away from their marriages. Women from small towns bolt, fed up with kinder, küche and kirche. Not long ago Deborah Feldman ran away from her Hasidic Jewish family which she considered to be stifling, disappearing into Greenwich Village, washing her laundry in her memoir “Unorthodox.” “The Song of Names” is likewise about a person who disappears, but this fellow runs not away from the rigidities of religion but more deeply into it. The overriding concept is this: why would a person vanish for thirty-five years, abandoning the foster brother who grew to love him and the foster father who financed and encouraged him and who lost so much money because of the young man’s evaporation?

Through Jeffrey Caine’s adaptation of a novel by Norman Lebrecht by the same name, director François Girard constructs a movie about music and betrayal, building on his own love of music as shown through his “Thirty Short Films About Glenn Gould,” which are vignettes about the pianist’s life, ‘The Red Violin” about the passion created by the instrument over centuries, and the TV episode “Yo-Yo Ma Inspired by Bach.” While “The Song of Names” is clearly about music, Girard is more interested in the emotional bond between two young men who had grown to love each other, and the search by one to find his foster brother who had ruined the life and finances of a British music publisher who had invited him into his home, bought a 284-year-old violin, and died two months after the disastrous disappearance.

This is one of those films that come forth as convoluted given the editor’s frequent changes of eras. The betrayer, Dovid, is played by Luke Doyle aged 9, by Gerran Howell ages 17-21, and thirty-five years later by Clive Owen acting out of his comfort zone as a middle-aged ultra-Orthodox Jew. His foster brother Martin is played by Misha Handley aged 9, by Jonah Hauer-King ages 17-23, and thirty-five years later by Tim Roth. The opening scenes are the most realistic and credible before the story heads off into a not-easily-believed fantasy zone.

Dovid’s father sent his violin prodigy to London to live with a family that includes Martin, who is about the same age and is envious of his new foster-brother’s gifts. Though Martin and Martin’s dad are Christian, the British household honors all Jewish traditions for their new guest, even abandoning their love of breakfast bacon. After a bout of sibling rivalry, the two youths become great friends. When Martin’s father invests in a concert expected to start Dovid’s career as a musician, Dovid disappears completely, leaving the audience at the refund booth and the underwriter heavily in debt. When Martin, now in his mid-fifties, finally tracks Dovid down, he finds out for the first time what happened to his friend. He discovers—as do we in the audience—wholly dubious circumstances of the vanishing act.

In the midst of the credulity-straining tale are some moving scenes. During the German bombing of London, as Dovid takes refuse in the neighborhood air-raid shelter (impressively decked out with scores of sandbags), Dovid pulls out his violin, setting up a competition with a slightly older violinist as though executing a theme and a fugue. On an even more emotional level, the middle-aged Dovid discovers what happened to his parents who had stayed in Poland too late to avoid the Holocaust. A rabbi (Kamil Lemieszewski), doubling as a cantor, sings a song of names whereby the melody makes it easier for him to recall the names of victims who died at Treblinka. Nor can the film be faulted for pulling at the tear ducts at a sight in Treblinka death camp, where the principals walk past stones that memorialize the murdered Jews.

Should we forgive Dovid for bankrupting Martin’s family given his rare talent with the strings, or do we find that difficult given also that Martin has spent his a lifetime fretting about Dovid’s disappearance, heading off from London, traipsing around Poland and New York to solve the puzzle? The movie suffers from the frequent editing to cover the three stages of life and could be served better by a chronological approach. Montréal and Budpest stand in for New York and Warsaw.