The dog had traveled the world by private jet, was beloved by celebrity friends in Malibu, spawned a high tech clone, and was the world’s first dog to become a hologram 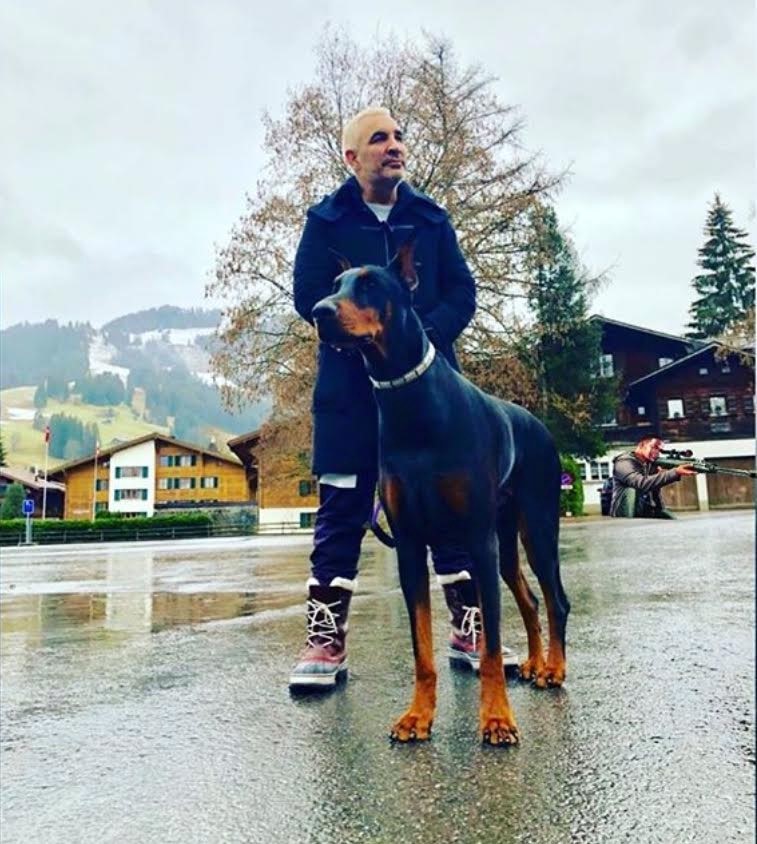 ader and his master, Alki David, in Gstaad, Switzerland in early 2019.

Those ears, unmistakable, potentially terrifying, became a symbol–popping up in hip hop videos, newscasts, on red carpets and at private airports around the world. Just as Greek billionaire Alki David plays at being a kind of “evil genius,” Vader was the perfect familiar. Black as night, Nosferatu ears that could have been designed during the Golden Age of Hollywood, and so precisely obedient to his master it sometimes seemed impossible he wasn’t a creation of technology and artificial intelligence. Vader died of cardiac arrest after a long illness in Malibu, with Alki and his girlfriend Leyla by his side.

Vader was born in Bavaria, from the noblest lineage, the companion of kings. (The exclusive breeder’s farm requires its clients sign an NDA to not discuss its name).

Alki’s two previous Dobermans were from the same breeder, including Satan, who also became a star of FilmOn Networksand passed away six years ago and Diva, who is now 3, and lives at Alki’s compound on the island Spetses, in Greece.

Vader stood by Alki Davidi’s side when the out of control secret police of St. Ktts-Nevis arrested him and actor Jonathan Rhys Myers and confiscated $1 million in hemp plants destined for humanitarian operations. (The police threatened to shoot Vader, but Alki managed to get his jet off the ground before he was thrown behind bars–Rhys Myers and his mother-in-law and newborn baby were assigned to make sure Vader got home safely to Malibu.) Vader also stood by Alki when a hip hop event at the Hologram USA theater went awry and the crowd threatened to riot–the dog did not provoke but stood as a strong deterrent to any who would move toward Alki.

Neighbors in Malibu Colony will remember Vader patrolling the beach–his shape so distinctive you knew he was coming even in the fog. Sting, Pamela Anderson, John McEnroe and Linda Rondstadt are all known to have stopped for a chat with the beast.

Vader was also known in Gstaad, Switzerland, where Alki keeps a 17th century chalet. A recent battle arose when a new Maitre d’ took charge of the Park Gstaad Hotel. The whole town was near civil war over the incident, according to the paper Berner Zeitung, until finally the Maitre d’ saw he was losing the good will of the town, and one of its most famous residents, and brought Vader a platter of sweetbreads and blood sausage as a peace offering. See more about that incident here.

In his last days, Little Vader arrived, Vader’s own clone, made by Dr. Olaf Olofson, Chief Geneticist of one of Alki’s companies, the pioneering CBD brand Swissx. Dr. Olofson works out of a secret laboratory in Korea–where he spends most of his time developing new strains of cannabis and on “extinction reversal.”

Little Vader was in the news recently when he saved an elderly couple from an out of control drone falling toward them on the beach, as reported by the Daily Star UK. A heroic act that knocked the drone away but landed Alki in the ER with a sliced up hand. “No doubt, Little Vader was with Vader long enough to learn from his noble spirit,” said Alki.

Vader has appeared in multiple hip hop videos made by Chief Keef, in the movies, Lord of the Freaks and Bob Thunder, Internet Assassin, and perhaps most historically, as the first ever hologram dog in the resurrection show The Jackie Wilson Story at the Hologram USA Theater in Hollywood. He had also appeared in countless video moments as Alki documented his own life for the public nearly around the clock, including alongside people such as Lil Wayne, Mike Tyson, Gerard Butler, Ray J, Kato Kaelin, Lisa Bloom, Soulja Boy, Akon, Chris Brown, Tommy Chong, and Scott Disick of Keeping up with the Kardashians.

Alki was very moved by his friends passing, but grateful for the time he had with him and that they could be together at the end. He posted on Instagram:

“My beloved Vader passed away today. He was really a gentle giant, protector and friend. It was an honor to travel with him through life. I will always be grateful to him and his kindness.”

Friends of Alki were crushed to hear the news and flooded the IG post with responses.

Among them were many ex-employees of Alki’s companies, such as Carl Dawson who said “Very sorry for your loss. Vader will not be forgotten.”

Tully Banta-Cain, the retired NFL star wrote, “Condolences my friend. Great dog.” Stephen Belafonte, who recently taped a podcast episode with Alki where he spoke candidly about his marriage to Mel B, wrote: “Sorry for your loss, Brother. I know how much you loved Vader!!! As a dog father, I really feel for you!!” Pop art star Alec Monopoly, wrote “So sorry for your loss brother.”