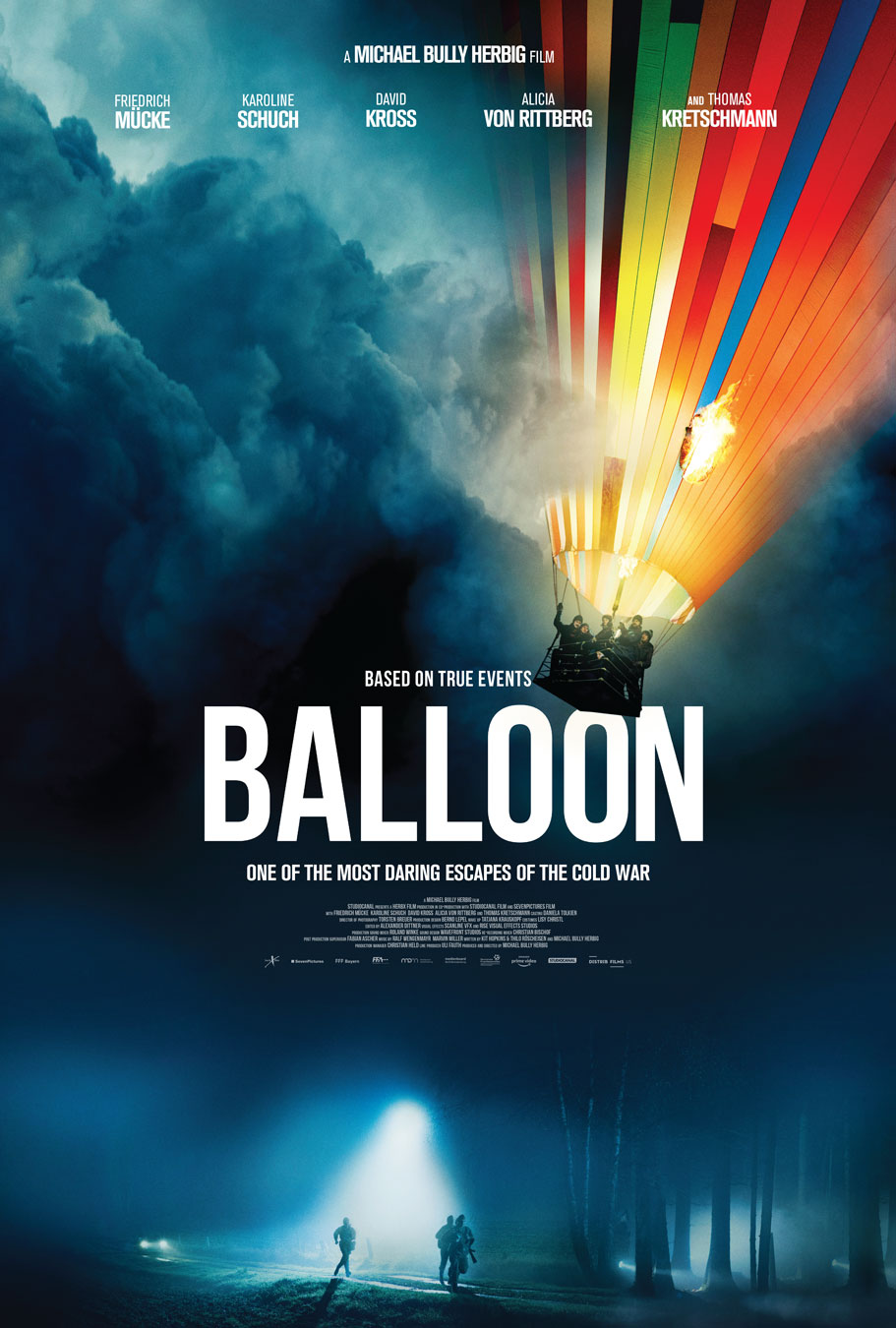 The Jews in Germany had a real problem during the 1930’s, the situation escalating rapidly right up to the extreme dangers they faced in the forties. By contrast, the people of East Germany, mainly Christian, could hardly consider themselves similarly persecuted by the Communist regime. I fear that Director Michael Herbig, best known in the German comedy scene by performing and directing works like the parody “Bullyparade: The Film,” does not get across with his feel-good thriller “Balloon,” why families are so eager to escape from the Communist sector into the Western area that they would risk their lives. Still, since this is based on a true story, two heroic families go through a lifetime of anxiety in just a few weeks to get out of the land where everyone is under surveillance by the Stasi (police). We see that people seek a new life in the West where they would lose their furniture, their money, and visits with grandparents, in order to go to another part of their own country.

The families on exhibited here are not outliers. A large number of East German citizens tried to escape to the West, some from East Berlin where the distance to a new life is almost as close as that between North Korea and South in the DMZ. But under the leadership of Peter Strelzyk (Friedrich Mücke), a not-so-merry band of travelers need to go from their village across to Bavaria. They plan to do this in an almost unique way, however, by building a balloon just as you and I would build a kite and float above the clouds, descending slowly into the forest across its informal border. Since “Balloon” is a thriller, and since the Strelzyks and another family actually make the trip, we visualize that the heroic people would meet with so many failures that you can see them spending their lives in a Stasi jail—though they would be free when the country became unified.

Peter and his wife Doris (Karoline Schuch) live in town of Possneck where Peter makes a living as an electrician—not the best training for building a balloon. Yet they have a car, a TV, and through their friendship with the people next door whose household head (Ronald Kukulies) happens to be Stasi, they are able to take a vacation at an East Berlin hotel. At the same time their oldest child is being “hit on” by the Stasi official’s daughter, the whole setup reminding Amazon Prime customers of the friendship between an FBI agent and a Soviet spy in the wonderful series “The Americans.”

Together with their friends Petra (Alicia von Rittberg) and Günter (David Kross), who at first were unwilling to take the risk, they build the balloon, somehow unnoticed by the local Stasi head Lieutenant Colonel Seidel (Thomas Kretschmann). As if the perils of the balloon trip were not enough, Doris accidentally drops her bottle of thyroid medication in the woods, recovered by the police who begin a search of the three pharmacies that may have filled it.

If you saw “The Aeronauts,” about pilots launching a historic balloon flight in 1862 for scientific purposes, you would be privy to all the things that might go wrong. But that picture lacks the excitement of “Balloon,” which could be appreciated not only by people who are political wonks but by those who don’t know Berlin from Ouagadougou. The thriller aspect reaches its climax when it appears that the entire East German military are in the chase, using helicopters and cars and communicating with frantic phone calls. You’d think that these were important nuclear scientists carrying their secrets into unchartered territory. You might wonder: if these people got away with their scheme—as they did—would the entire Communist system collapse (as it actually did after the collapse of the Berlin wall, built in 1961 allegedly to prevent Western “fascists” from entering the East to destroy the socialist system)?

Whether that frantic pursuit of these humble people took place as we see on the screen or not, this is not a documentary but a well-made narrative dramatizing a heartwarming tribute to the men and women who shed their property and risked their very lives simply to go from one part of the country to another.