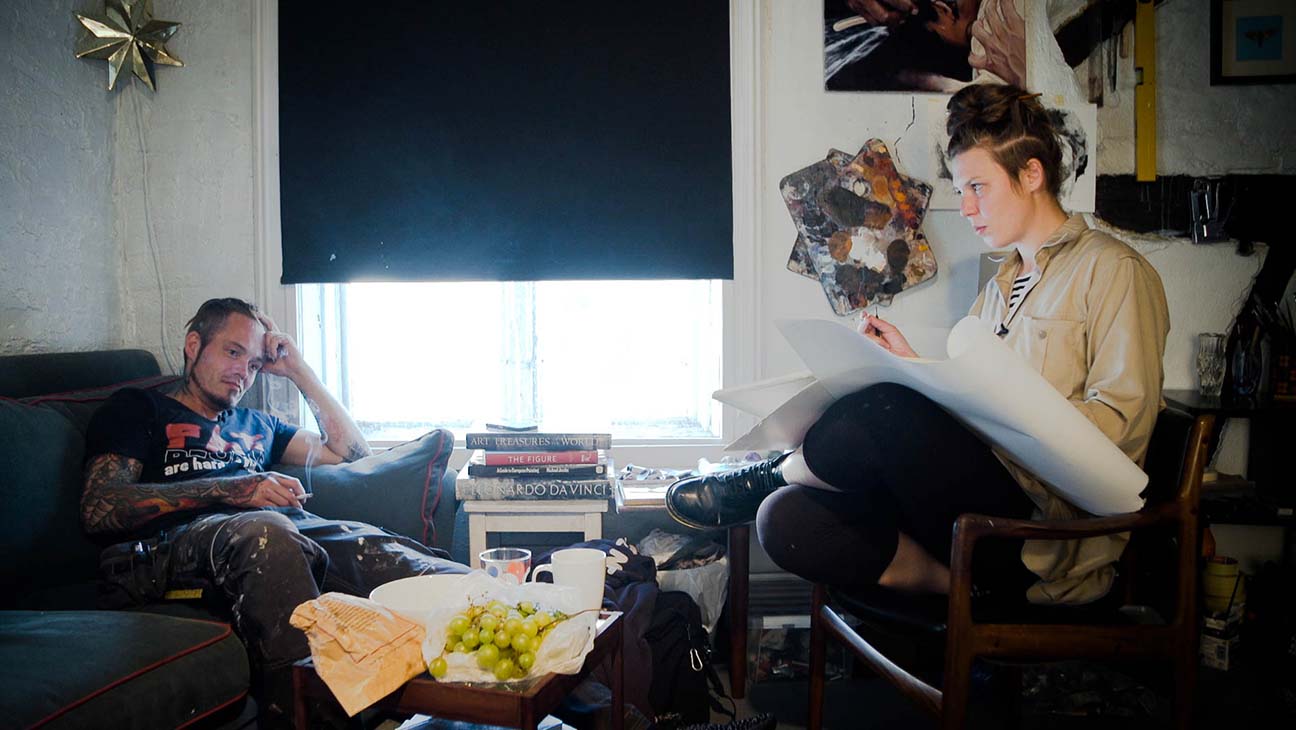 The title thief of this unusual and arresting (so to speak) documentary sometimes wears a shirt that says “Crime Pays.” Not surprisingly, it really does, because Karl-Bertil Nordland not only avoids prison when he is nailed as a thief but he gets some life-affirming lessons from the victim, Barbora Kysilkova. Emerging from Benjamin Ree’s film (the director’s sophomore feature follows his “Magnus” from four years back, a study of a Norwegian chess prodigy) is that the relationship drawn here could serve to motivate meetings between criminals and victims together, the former trying to understand the bad guy’s motivation while the crook learns that the person he harmed has actual feelings.

Largely a two-hander though Ree brings in side characters such as the painter’s girlfriends and the artist’s partner, “The Painter and the Thief, organized in a helter-skelter way (that’s a compliment in this case), focuses on the Karl-Bertil Nordland and Barbora Kysilkova’s meetings and chats together, then splitting them up to watch each acting and reacting as separate individuals, each with their own difficulties and moods.

Of course criminals are not the only people with severe problems. Barbora describes how in Berlin she was abused by her boyfriend, made to feel insignificant and unworthy of attention in the art world or anywhere else. For his part Karl-Bertil Nordland has more serious problems as a junkie who in one scenes scores heroin while on the way to rehab and had already spent eight years in jail. And speaking of jail you’ve got to admire the Norwegians, benefactors of a social democratic state (a nanny state in the words of some of our right-wing friends). The prison provides Karl with a private room and a desk, a modern phone, a nice bed, all bringing to mind Michael Moore visit to a Norwegian prison and a similar look at the country-club atmosphere from “Breaking the Cycle.”

Karl gets a sentence of an additional year not because he stole a painting but because he violated the penal code in a vehicular accident that could have paralyzed him. For her part Barbora comes across at times as emotionally paralyzed. She is three months behind in rent and could afford the produce from a supermarket only by asking the checker to remove the grapes.

Special praise for the filmmaker who evokes natural performances from the duo while keeping the appropriate distance. The film is mostly in English with considerable Norwegian, highlighting the idea that Norwegians, and perhaps most Europeans, learn English as a second language given the difficulty of understanding the world in a tongue spoken only in one country.