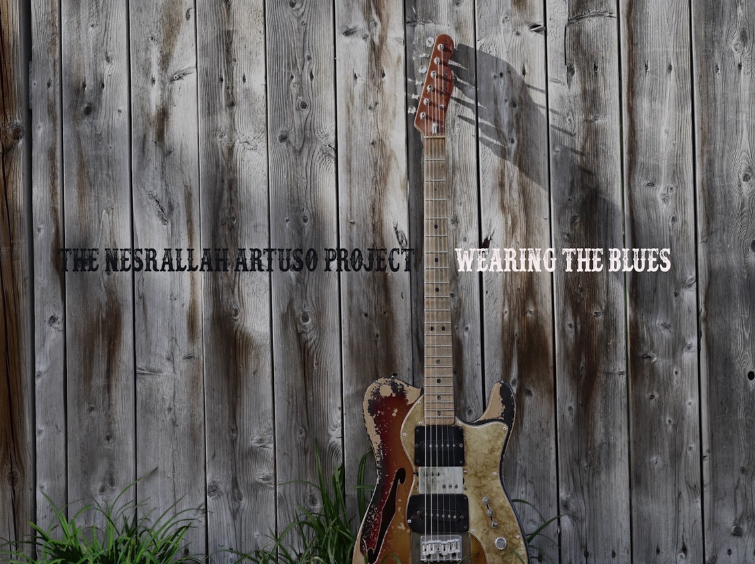 Naturally connecting with other like-minded people who share the similar passions can be difficult in any environment, but the process has been even more challenging this year, due to international health and political concerns. But longtime friends and musical collaborators, vocalist and instrumentalist, Victor Nesrallah, and his fellow instrumentalist, Danny Artuso, have organically bonded so well for over 30 years that they have finally released their first full-length album, ‘Wearing The Blues.’

The newly released record from the duo, who collectively go by the name Nesrallah Artuso Project, features an array of 10 uplifting and spirited tracks that perfectly blend elements of modern blues, rock and funk in their vocals and instrumentals. The entries on ‘Wearing the Blues,’ which is a true labor of love, stunningly range from recalling romantic entanglements gone wrong to edgy social commentary that questions, and at times criticizes, the current confusing media culture.

While Nesrallah has taken a more spontaneous approach to his music throughout his career, Artuso’s background is in tight arrangements, which gives them complementary chemistry as a band. With their own unique style of creating songs, and also taking inspiration from their fellow classic blues musicians who share their tales of personal hardship, their latest tunes feature a relatable, stunning balance of intimate narratives and life’s simple truths.

‘Wearing The Blues’ opens with one of its best entries, ‘Tell Me,’ which is driven in part by stellar twangy, country-fueled guitar riffs. The classic heartbreak song features Nesrallah’s proclamation that he wants his heart to heal, as he ponders when he’ll get over the pain of the woman he loves not no longer showing him that she feels the same. The track immediately shows the powerful dynamic the singer has with Artuso, as the lyrics, vocals and instrumentals perfectly reflect the pain Nesrallah has over the decline of his romantic relationship.

The first tune on Nesrallah Artuso Project’s new album transitions into its sophomore effort, ‘Confused,’ which features special guest Guy Del Villano on the piano. The follow-up song continues the enthralling country twang on the guitar and piano from its predecessor. Nesrallah croons about his surprise that when he woke up this morning, the woman he loves asked him to leave, as she told him she loved him the day before. The two musicians effortlessly crafted another gripping, heartfelt breakup track, as the vocalist proclaims that the woman he loves left him with the blues.

Another memorable entry on ‘Wearing The Blues’ is its fifth song, ‘Fake News,’ which is noteworthy for its distinct departure in theme from the records’ previous tracks. The tune, which thrives with its unparalleled blend of classic rock and blues moments on the guitar and piano, is an emotional confession from the musicians, as they declare that they don’t know who they can trust in the current political climate. With the universally relatable lyrics that they don’t know what to believe, or how society has turned out the way it has, the song is the perfect soundtrack to modern day’s political environment.

‘Fake News’ is followed by the record’s sixth entry, ‘The Runaround,’ which continues the group’s classic rock vibe with its vocals and instrumentals, particularly on the guitar. Driven by a pulsating beat, the song has the potential to become ‘Wearing the Blue’s biggest commercial hit. In enthralling vocals, Nesrallah admits that he thinks he must be a fool, as the woman he loves is always giving him the runaround, and all he wants is to find and maintain love.

‘Wearing The Blues’ begins to wind down with is penultimate track, ‘Nostalgia Blues,’ on which Nesrallah and Artuso long for their glory days. Nesrallah croons about the fun they had when they went to the club downtown and wasted time, and they could do no wrong. Supported by classic, alluring rock and blues-infused guitar riffs, the tune is the perfect ode to the more carefree, fun times people had before heartbreak and political qualms began to take over their lives.

‘Nostalgia Blues’ is succeeded by the album’s final-and title-track, which is more traditional in structure. Driven by a fiery electric guitar, the tune features Nesrallah and guest vocalist, Lynne Hanson, who both mourn not only their lost loves, but also the fact that there’s nowhere to play and enjoy music anymore. While they have both lost not only their romantic loves, but also the ability to share their love of music, the two singers still evoke hope they their lives will improve soon.

After being friends and longtime collaborators on other musicians’ projects since the 1980s, Nesrallah and Artuso have finally released their first full length album, ‘Wearing The Blues,’ earlier this fall. The vocalist and instrumentalist joined their similar experiences, particularly over heartbreak and political concerns, for Nesrallah Artuso Project’s uplifting and spirited 10 new songs, which perfectly blend elements of modern blues, rock and funk in the vocals and instrumentals.

The songs on ‘Wearing the Blues’ stunningly range from recalling romantic entanglements gone wrong to edgy social commentary that explores the current confusing media culture. With their own unique styles of creating songs, and also taking inspiration from their fellow classic blues musicians who share their tales of personal hardship, their latest tunes feature a relatable, stunning balance of intimate narratives and life’s simple truths.