Veteran genre filmmakers Andy Collier and Toor Mian are once again proving that the most constraining situations can ultimately lead to the most emotionally revealing conclusions with their latest horror movie, ‘Sacrifice.’ The British filmmakers, who previously collaborated together on the 2017 horror crime drama, ‘Charismata,’ reunited to create a new character-driven, Lovecraft-inspired supernatural movie. Their latest feature chronicles how a seemingly strong married couple is easily influenced and manipulated by a sinister cult that worships a sea-dwelling deity. during a stressful time in their relationship.

‘Sacrifice’ is based on the short story, ‘Men of the Cloth,’ by Paul Kane. The screen adaptation was written, directed and produced by Mian and Collier, who also served as the cinematographer.

The drama opened this past weekend in select theaters, and is also being released today On Demand. The film will also be distributed on Blu-ray on Tuesday, February 23, courtesy of Epic Pictures.

‘Sacrifice’ follows New Yorker Isaac (Ludovic Hughes) and his pregnant wife, Emma (Sophie Stevens), as they return to the remote Norwegian village where he was born, following the death of his mother. He receives an unexpected inheritance from his parents, who are now both deceased-the home they shared as a family when Isaac was born.

Once the couple arrives in the European country, they meet the seemingly nice Renate (Barbara Crampton), the sheriff of the isolated island where he once lived, who offers to help them settle into the community. Isaac and Emma eventually find themselves caught in a nightmare, as an ancient evil awakens to claim a birthright of its own.

Collier and Mian generously took the time recently to talk about writing, directing and producing ‘Sacrifice’ during an exclusive interview over Zoom. Among other things, the filmmakers discussed that they were inspired to pen and helm the movie together after they finished production on ‘Charismata,’ as they wanted to make a more contained, effects-driven supernatural story. They also shared that they feel blessed that they were able to cast the performers they did in the drama, especially genre icon Crampton, as she brought an extra dimension to her multi-faceted character.

ShockYa (SY): Together, you co-wrote the script for the new horror film, ‘Sacrifice.’ What was your inspiration in penning the screenplay, and what was the process like of scribing the story?

Toor Mian (TM): Andy and I made another film several years ago called ‘Charismata,’ and that was quite a hybrid movie. It was part police procedural, part supernatural thriller and part horror, so it was a mishmash of genres.

So we thought for our next film, we’d create something that was a bit more contained and traditional, because to be frank, getting ‘Charismata’ made on the money we had was quite a mission. So we thought about making a story that was both cinematic and contained.

We then came across Paul Kane’s story, ‘Men of the Cloth,’ which really encapsulates those elements for us. So we thought, let’s try to adapt this wonderful short story. Then in the process of doing so, we realized in a lot of ways that it would be even more ambitious than our previous film because it has so many SX effects that we couldn’t necessarily do justice to on the budget we had.

But we were so in love with the general essence of the story that we decided to retool it and make certain adjustments. One such adjustment was to change one of the short story’s main scares0the scarecrows-to essentially Cthulhu. It was quite naive of us to think that we could represent that on screen. (Mian and Collier laugh.)

Andy Collier (AC): Although we did keep a few scarecrow-type things in there, so we wouldn’t completely move away from the story. (Collier and Mian laugh.)

TM: Yes, so it started off as something that was meant to be extremely contained, almost like a ‘Cabin in the Woods’-type horror film. Let’s face it, that’s 90 percent of horror movies that get produced. (Mian laughs.) Then to put that in the vast expanse of Norway, and include mythical sea deities, was ambitious.

SY: In addition to writing the script, you also co-directed the movie. How did working on the screenplay influence the way you approached helming the drama? How would you describe your overall directorial style together on the feature?

AC: We’ve co–directed films together twice now, and each time the approach was the same, but the films turned out quite differently. Something that we did on both films, which I think turned out quite well, was spend a lot of time talking about themes and motivations, as well as working on the script.

With this film, especially, we also spent a lot of time working on the visuals beforehand. Before the script was finished, we created a common vision, because we knew exactly what we wanted to happen. We then finished the shotlist and script by January, and we were filming in July and August.

When it came time to start thinking about shooting the film with a cinematographer, I knew that in order to deliver our vision so preciously, we needed detailed, complex, full-color storyboards. But neither Toor or I can draw, and we knew we would have to spend a lot of time with the cinematography, so I decided to also shoot the film.

Then when it became time to shoot, we split the workload. I worked on the visuals, and looked after the camera crew and worked with the art director, Alex Jones Nash. Meanwhile, Toor worked with the actors, to a large extent. Obviously, there was some crossover

SY: Speaking of the actors, ‘Sacrifice’ stars Barbara Crampton, Ludovic Hughes and Sophie Stevens in the lead roles. What was the casting process like for the film?

TM: The casting process was actually pretty intensive. In terms of the bulk of the cast, we spent about a month seeing a lot of actors in London, despite the majority of the cast being Scandinavian. London is a European hub of filmmaking, so all of the Scandinavian actors were, luckily for us, based in London.

In terms of Barbara Crampton, one of the producers on the film, who’s also an actor, actually starred in a film that she made a few years ago. It was a horror film called ‘Replace,’ and they struck up a relationship and maintained their friendship.

Her character in this film was originally going to be a male. But off the cuff, the producer suggested Barbara for the part, and offered to send her the script. So we thought that would be amazing, because we were trying to make a Lovecraft horror film, and she’s essentially the Queen of Lovecraft. She also looks as Scandinavian as you can look.

So we sent her the script and she was very interested, and we re-wrote it especially for her. We think switching that character from a male to a female gave the character an extra dimension that it didn’t initially have. Overall, we got very lucky, in terms of the cast, especially with Barbara.

SY: ‘Sacrifice’ is (now playing) in select theaters and On Demand, and (will also be released on) Blu-ray on February 23 by Epic Pictures. What was the process of securing the dual theatrical and On Demand distribution?

TM: We finished the film just as COVID hit, and it was an absolute whirlwind as we tried to figure out how we were going to get it completely finished and released. (Epic Pictures) then came aboard, and we were very relieved when they did, because things are still completely crazy, at least (here) in the UK. It was a case of adapting, and Epic has been wonderful with handling the distribution. 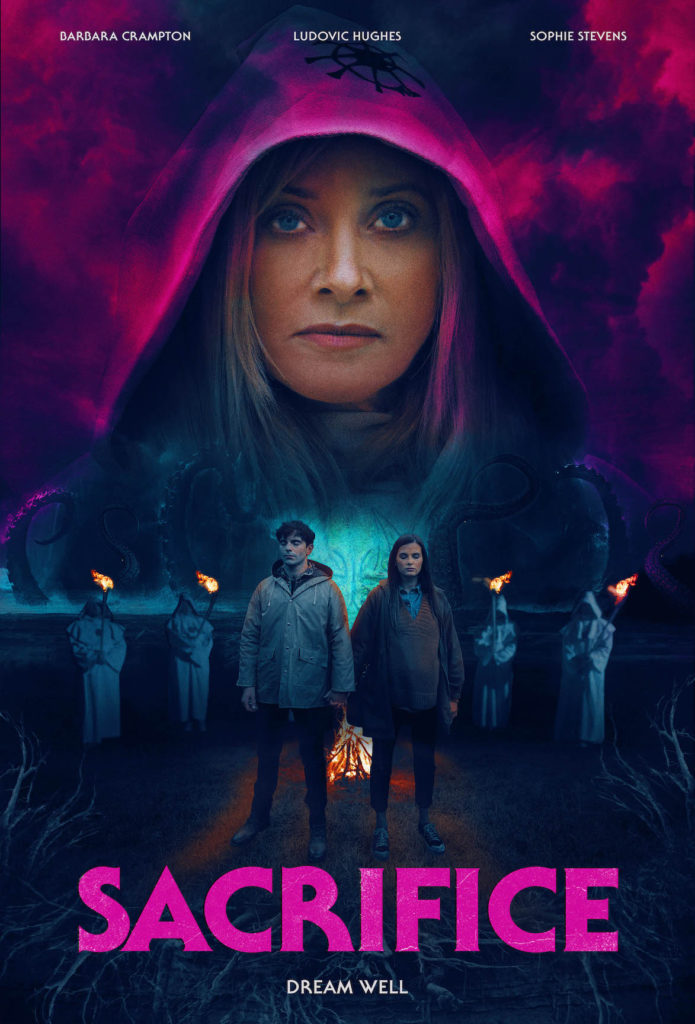