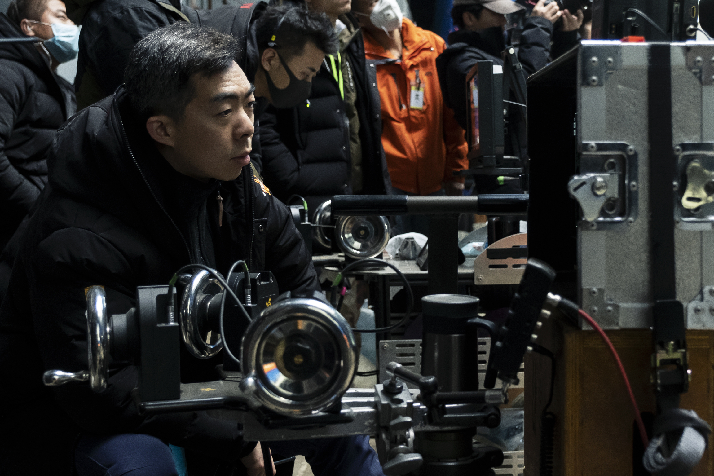 Co-writer-director Lu Yang on the set of the action fantasy film, ‘A Writer’s Odyssey.’ Photo courtesy of CMC Pictures.

Battling for survival during challenging and competitive situations is a major theme that famed Chinese filmmaker Lu Yang has successfully conquered throughout his career in the adventure genre. After initially garnering international fame in the world of cinema in the 2010s for writing and directing the action movie, ‘Brotherhood of Blades,’ and its sequel, the scribe-helmer is once again proving his natural ability to succeed with his latest visually stunning masterpiece, ‘A Writer’s Odyssey.’

CMC Pictures is set to distribute the drama in theaters this Friday, February 12. The high velocity film is expected to defeat strong competition at the box office, as it’s being released on this month’s Lunar New Year, which is one of the most popular and high-profile weekends for movie distributions in the filmmaker’s native country.

‘A Writer’s Odyssey,’ which is based on the novel of the same name, tells the story of Kongwen Lu (Dong Zijian), the author of a fantasy novel series that follows a heroic teenager, who’s also named Kongwen, on a quest to end the tyrannical rule of Lord Redmane, under the guidance of a Black Armor (Guo Jingfei). But through a strange twist of fate, the fantasy world of the book begins to impact life in the real world, which leads Guan Ning (Lei Jiayin) to accept a mission from Tu Ling (Yang Mi) to kill the author.

Yang generously took the time recently to discuss co-writing and directing ‘A Writer’s Odyssey’ during an exclusive interview over Zoom, through the aid of a translator. Among other things, the filmmaker discussed that while the collaboration between the different departments was challenging at times, since the story is driven by action and fantasy elements, he was well prepared as the helmer to tackle any challenges the production faced. He also mentioned that one of the most important aspects during the production was to find the most appropriate actors for the leading roles, as their portrayals needed to bring authentic emotions to their characters’ journeys.

The conversation began with Yang discussing his experience of working on the screenplay, and what the process was like of working with his co-scribes to create the story for the movie. “It was very hard in the beginning to write the script because the novel in the film features a very strong literary character. So we needed to capture the essence of the novel to get the character’s relationships and qualities into the film’s story,” he noted.

“Also, the novel was a huge success, so it was hard for us to grab that story and turn it into a film script,” the writer also admitted. “The difficulty wasn’t just in getting the right elements of the story from the novel, but also being able to easily adapt it for the film, and present it in the right film language.

“After the script was completed, we presented it to the cast and all of the filmmakers on the project. It was a unique and unprecedented project for the Chinese market. The whole cast was very surprised when they saw the story,” Yang continued. “During this process, we were able to create a story that’s able to create possibilities to find hope. So the whole experience, from the preparation process to the filming, is a testimony to that theme in the story.”

After the scribing process was completed, the filmmaker enjoyed the process of then delving into his directorial duties on the set. He then shared what his overall helming style was like on the set.

“When we were writing the script, we were using words to record and present our thoughts. So we used as much detail as possible, so that we were able to present the story that we wanted to make to our partners,” Yang shared.

“During that process, there were a lot of uncertainties about building a new world from scratch, so we made different plans for the different processes. Sometimes we had about 10 plans prepared before we decided which one to use,” the director continued. “In terms of the character, art and action designs, we had about seven or eight prepared plans, and we would decide together which would be the most suitable one.

“There was also difficulty in the collaboration between the different departments because this is a big production. But we figured out how to overcome that during the filming process,” Yang added.

Like the filmmaker previously mentioned, ‘A Writer’s Odyssey’ features a diverse cast. He delved into further detail about what the casting process was like for the drama was like. “For the casting process, the most important thing was to find suitable actors for the leading roles, including the teenager, the novelist and the father, who’s the main character,” he shared.

“Since the father’s not a traditional hero figure, and is just an ordinary person, we wanted the audience to believe that they could trust him, and the fact that he has the potential to become a hero. The audience can have the expectation that they can grow together as they go on an adventure with him,” Yang noted.

“For the novelist, it was very hard to choose because he has to play two completely different roles. In the real world, he’s a novelist who’s torn down by the reality of his experiences. In the novel’s world, he’s an energetic teenager who’s brave enough to fight against the regime. Eventually we found Dong Zijian to play the novelist, and we were lucky to find him, as he was suitable for both roles,” the helmer concluded.