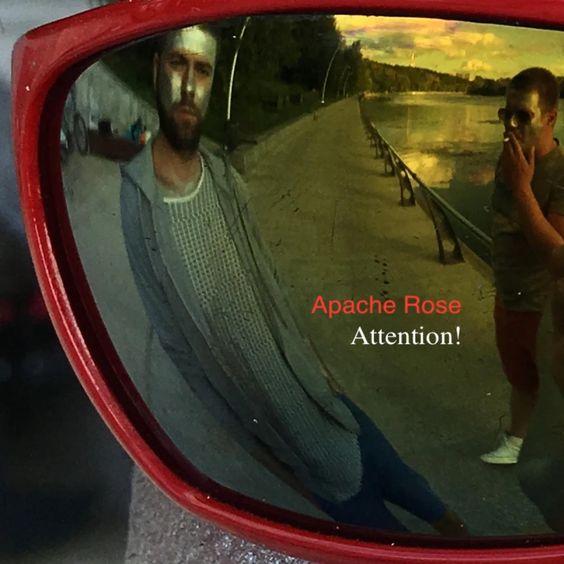 Infusing internationally relatable emotions and rites of passage into a genre that’s largely known for its hardcore antics isn’t always an easy feat. But Moscow-based rock band, Apache Rose has done just that with the recent release of its new 10-track album, ‘Attention!’ The record expands on the group’s core 1990’s hard rock influences, while also infusing punk, metal and pop overtones in equal measure throughout its entries. The intriguing blend of diverse genres throughout the LP’s instrumentals support singer Ilya Novokhatskiy as he croons about such universally understandable issues as contending with heartbreak and why life has wronged him.

Apache Rose, which was brought up on such legendary American and British rock bands from the 1970-’90’s as Metallica, Sex Pistols, Nirvana, Foo Fighters, Queens of the Stone Age, Soundgarden and Stone Temple Pilots, prove that it can effortlessly create its own blend of rock and alternative instrumentals and vocals. Like its influences, the up-and-coming Russian group has crafted an engaging album that its worldwide fans can listen to on repeat.

‘Attention!’ begins with the perfect ode to ’90’s alternative tunes with the noteworthy entry, ‘Easy,’ which brings its listeners on a bountiful journey of self-discovery. Driven by a growling rhythm on the guitar, Novokhatskiy sings in commanding-yet equally smooth-vocals. He proclaims that he never wants to go back to a damaged relationship that he was once in, which instantly helps prove that the record has a genuine repeatedly factor.

‘Easy’s is followed up by ‘Attention!’s sophomore track, ‘On My Watch,’ which features grittier vocals and instrumentals than its predecessor. Driven by raw, rhythmic guitars riffs that feature sonic shifts and breakdowns, Apache Rose’s singer shares his angst in his vocals.

Another noteworthy entry on the LP is its fifth tune, ‘Hell.’ Novokhatskiy contemplates the the life he never led and the words he never said, and expresses that he regrets not doing certain things he wanted to do with his life. While he relatably evaluates his past and emotionally shares that he’s living in his own personal hell, the song features a surprisingly uptempo and energetic beat that will surely make it a classic entry in the rock genre.

The album’s title track is another standout song on the band’s current release. ‘Attention!’ is driven by a sassy, commanding blend of rock guitar riffs and drum beats, which support the singer’s gruff, dizzying vocals. He proclaims that he’s never stop his life’s journey, as he finally feels that he’s going to make it.

Apache Rose is also sure to garner attention for their latest record’s penultimate tune, ‘You Kiss Like a Girl.’ Novokhatskiy’s distinctive, subdued vocals are full of confidence and authority throughout the song, which begins with seductive guitars riffs and drums beats that are supported by a pulsating rhythm. The singer croons that he doesn’t mean to tell the woman in his life how to do kiss, which will surely raise social concerns over the dynamic in the romantic relationship.

Despite the debatable subject matter in ‘You Kiss Like a Girl,’ the group is able to redeem itself with ‘Attention!’s last entry, ‘Some kind of Love,’ which is one of the record’s best tracks. The tune, which feels like a stunning crossover between The Beatles and Queen, features free-spirited vocals by Novokhatskiy. Combined with upbeat, grandiose guitar riffs and drums beats, the song creatively mixes Apache Rose’s signature rock sound with moments of a pop ballad that will surely continue to resonate with its listeners long after it’s over.

Novokhatskiy and his bandmates have created a stunningly emotional set of tracks on its latest LP. The Moscow-based band effortlessly put together a collection of internationally relatable tunes that perfectly weave together their hard rock roots with new elements of punk, metal and pop in their instrumentals and vocals. The resulting collection of songs highlight such universally understandable issues as heartbreak and missed opportunities, which many listeners will surely listen to on repeat.