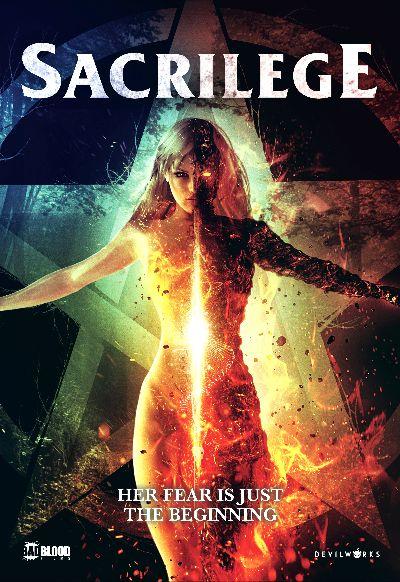 Actress Sian Abrahams is revealing how she led several of her strong-willed friends to fight back and overcome their greatest fears, both on-screen and off, in the new pagan cult horror film, ‘Sacrilege.’ The performer sat down for an exclusive on-set video interview to talk about her experience of contending with the emotional and physical challenges she-and her character of Blake-faced during the drama’s production and story.

During the clip, Abrahams discussed how from the time she first received the script for the movie, she knew the journey to shoot the feature would be distressing in certain ways. But through the interactive auditions and workshops she had with her three main female co-stars, as well as the time they spent living together in cabins in the woods, the actresses were able to create authentic real-life friendships and on-screen bonds together.

The exclusive on-set video interview with Abrahams is helping support ‘Sacrilege’s release across the USA and Canada this Tuesday, March 16, courtesy of Devilworks. The unveiling will begin with a DVD and Premium TVOD day-and-date distribution, which will be followed by a full VOD release, including on Amazon and iTunes, at a later date.

In addition to Abrahams, the film also stars Tamaryn Payne (‘Stalled,’ ‘Vendetta’), Emily Wyatt (‘Mission of Honor,’ ‘Rise of the Foot Soldier: The Heist’), Naomi Willow (‘NSR: The Jade,’ ‘Bonded by Blood 2’), Emma Spurgin Hussey (‘The Curse of Hobbes House,’ ‘A Werewolf in England’) and Rory Wilton (‘An English Haunting,’ ‘Fisherman’s Friends’). The drama was written, directed and executive produced by David Creed.

‘Sacrilege’ follows a group of young women during celebrations for the summer solstice, as they’re offered up as a sacrifice to a mysterious pagan goddess, who has the ability to sense their greatest fears. Using this power against them, she turns their nightmares into a horrifying reality.