Sometimes engaging with strangers during life’s most challenging struggles can ultimately lead to the most important discussions on such important social topics as mental health, addiction and gender dynamics. That’s certainly the case for actor Nyambi Nyambi and Rebecca De Ornelas’ protagonists of Zach and Sophia in the upcoming romantic comedy, ‘The Sleepless.’

The film is being released today on VOD. In honor of the movie’s distribution, ShockYa is debuting an exclusive clip from the feature.

The clip features Zach and Sophia as they get to know each other better while meeting for coffee. She asks him what three books he would bring with him if he was stranded on a deserted island, a question to which he initially groans. After Zach says that one of the books he would want to have with him is a manuscript on DIY on ship building, Sophia enthusiastically responds that no one else ever says that, but that’s what she always says. He then questions why she asked him the question, as there aren’t many book stores left, and they contemplate the benefits of print books versus eBooks.

Michael DiBiasio wrote, directed and produced ‘The Sleepless.’ In his second feature film, the filmmaker (‘The Videoblogs’) captures the predawn streets of New York City while weaving themes of insomnia and mental health into the story.

‘The Sleepless’ follows Zach and Sophia, two strangers who are both struggling with insomnia. When the pair meet each other randomly at 3AM, in the only spot nearby that’s open for coffee, sparks don’t initially fly. But with a gentle nudge from bodega owner Samir, and with nothing better to do, Zach and Sophia decide to amble together through the predawn hours. Although Sophia is guarded and Zach appears weary, each seems to eventually connect with the other. 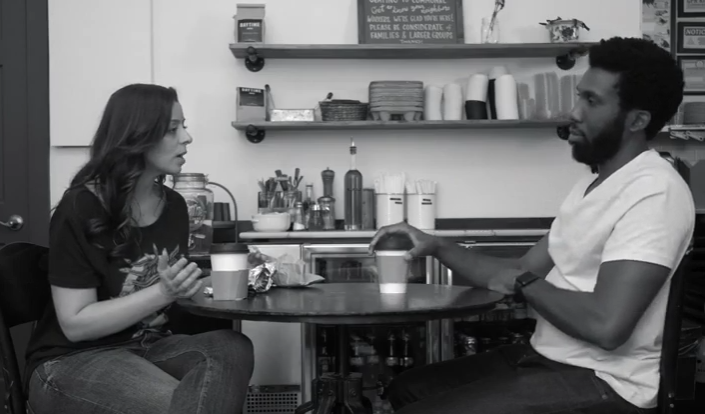