Throughout his career, M. Night Shyamalan has been — quite famously celebrated at first, and then derided in many of his later efforts — a filmmaker enchanted by twist endings, supernatural mysteries, and the delicious possibilities of their marriage to grand-gesture moviemaking. “Old,” about a group of vacationers who start to suffer the mysterious effects of rapid aging, checks those boxes, and in that regard it certainly feels like a Shyamalan film. But reach far exceeds grasp in this compelling premise in search of an elevated, or at times even competent, execution. Felled by a script which can neither make complete sense of its location nor explore with any discernment or complexity the issues it purports to raise, “Old” is an empty hook, a work of nervous energy and rib-nudging self-satisfaction.

The film’s first act structure is classic puzzle-box psychological horror, taking a group of factionalized strangers and throwing them together in a confined space. The story opens with Prisca (Vicky Krieps) and Guy (Gael Garcia Bernal) arriving at an upscale tropical resort for a vacation with their children, 11-year-old Maddox and six-year-old Trent. Happy on the surface but harboring adult tensions and a secret reason for the getaway, the family accepts their hotel manager’s special invitation to a private, secluded cove on the undeveloped side of the island, and off they head for a day at the beach — along with Charles (Rufus Sewell) and his younger trophy wife Chrystal (Abbey Lee), their little girl Kara, and Charles’ mother (Kathleen Chalfant).

As this group settles in for sun-soaked idyll, they’re soon joined by another married couple, Jarin (Ken Leung) and Patricia (Nikki Amuka-Bird), plus a rapper named (yes, seriously) Mid-Size Sedan (Aaron Pierre). When a body washes up in the cove, understandably inducing much panic, suspicion momentarily alights upon Mid-Size, before an even more gripping problem becomes evident: Maddox (Thomasin McKenzie), Trent (Alex Wolff), and Kara (Eliza Scanlen) are all aging at a rapidly accelerated clip of a couple years every hour. Attempts to leave the cove lead to blackouts, and while some present attempt to focus on the potential explanations for aging, others seem to surrender to a general swirl of madness.

Based on the graphic novel “Sandcastle” by Pierre Oscar Levy and Frederik Peeters, “Old” represents one of Shyamalan’s few movies not based on his own original screenplay. Thematically, however, it’s easy to see what attracted him to this material. Part of the problem is that this feels like the wrong vehicle, though, and maybe even the wrong medium, for this story. The weighty moral and ethical questions of the premise, as well as any truly satisfying pulpy treatment, are all blown past, sacrificed in a jumble of half-developed ideas and scenes flipped over madly like cards from a deck in a speed-game of War. When he’s not opting for gauzy dialogue (“My thoughts have more color in them now,” says one character), Shyamalan, in his adaptation, very urgently wants viewers to know that he has thought of various possible explanations for his characters’ predicament. The jittery insistence with which he crosses these options off a list — and the left-field introduction of a text which conveniently explains a lot of the specifics, while still setting the stage for a cathartic final reel twist — is more exhausting than thrilling.

Lensed by Michael Gioulakis, and shot in the Dominican Republic (the first movie in Shyamalan’s career to not have a portion shoot in or around his hometown of Philadelphia), “Old” takes place almost exclusively outdoors, on a beautiful sandy isle. But it’s devoid of personality, and lacking in spatial tension. Sometimes characters have to run a considerable distance to reach one another, other times they’re arbitrarily closer — whatever works for the cooler shot, Shyamalan and Gioulakis seem to say. Is there a pinch of “Lost,” and a dash of “Lord of the Flies” in the proceedings? Sure. But something like 2019’s survival horror film “Sweetheart” is much more effective in wringing dramatic tautness from a well-communicated setting.

Where the movie succeeds, at least a little bit, is in Shyamalan’s openminded and imaginative casting, which allows for some interesting interplay. Bernal and Krieps make for an intriguing married couple, and it’s a pleasure to see Sewell have a crack at the type of character he portrays here. The problem is that for every moment which seems poised to convincingly flesh out the movie’s characters, there are two or three others which render them little more than two-dimensional meat-puppet servants to Shyamalan’s choreographed game. “Old” ping-pongs back and forth between individual and group dynamics in willy-nilly fashion, whatever is convenient for the moment. Sometimes the kids are shunted to the side and nowhere to be seen, sometimes their dramatic aging is foregrounded. This highly compartmentalized structure robs “Old” of any legitimate momentum, and, indeed, seems to create a movie which — by featuring a character dramatically ask who amongst the group might be the best choice to swim out against the current and around the island, and later in the film announce that he was on the swim team so he’ll do it — has no particular memory of or duty to the scenes that came before it.

Wait… was that part of some meta-commentary on aging and recall? If so, it doesn’t land. 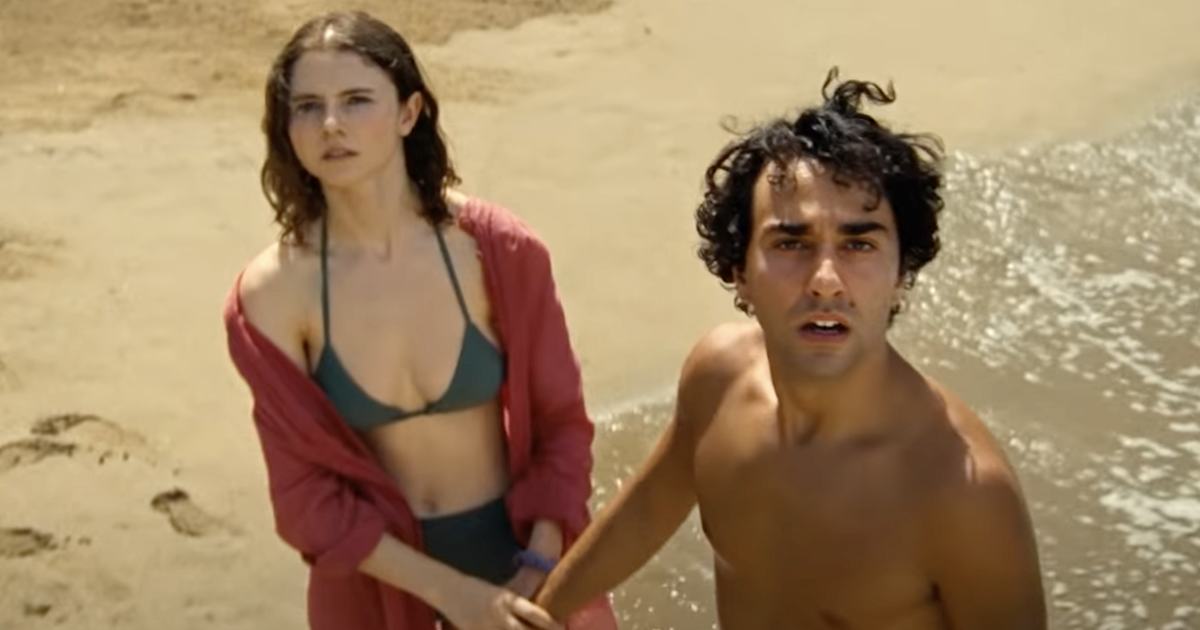