Bring Your Own Brigade Movie Review

Title: Bring Your Own Brigade

As the Dixie Fire presently rages on in northern California, having now consumed over 600,000 acres of land, the tragic and ongoing relevance of Lucy Walker’s new nonfiction offering Bring Your Own Brigade, available to stream on Paramount+ and CBSN alongside its theatrical engagements, is only cast into starker relief. Part human interest docudrama, part scientific interrogation of why modern wildfires seem to be becoming more and more deadly, Walker’s Sundance Festival-minted effort is an involving and singular work, at once tough-minded and inquisitive. So many of the ingredients of both a great drama — love, loss, sacrifice, hope — are artfully blended and served up alongside an unflinching examination of some of the associated costs and collateral damage of unfettered capitalism, privilege, and, quite frankly, human arrogance and ignorance.

Bring Your Own Brigade opens with a focus on California’s Camp Fire of 2018, and it comes out swinging — landing heavy emotional blows rooted in immersive footage. Clips both heartbreaking (a koala bear on fire, crying out in pain as it’s rescued by humans) and harrowing (cell phone videos recorded by people in cars, recordings of emergency 911 phone calls) paint a hellish picture of the existential panic which fire can induce, and the trauma it leaves behind. The commingled suffocating menace, dark beauty, and terrible human cost of some of this footage, like a swirling blizzard of sparks spreading in the night sky, mark it as more gripping than almost anything found in a narrative thriller this year.

The movie then segues into a comparative exploration of another massive fire, in the much more economically prosperous area of Malibu, and the sense of aggrieved entitlement many residents feel about the individual response (or lack thereof) of an overwhelmed fire department. Interviews with firefighters and regional politicians, as well as scientists and other researchers of wildfire data, give the movie a bit of academic and authoritative mooring. But Bring Your Own Brigade in large measure casts its lot with regular folk, centering their stories in a way that makes the film as a whole feel very plebeian, and relatable.

The British-born Walker narrates the project, but is extremely smart and judicious about where and how she inserts herself into the narrative. When she expresses bewilderment, as a European, at the uniquely American embrace of, as she terms it, “self-immolation under the mantra of personal freedom,” it’s a piercingly accurate assessment of a city council meeting viewers have just seen unfold, where local leaders, bowing to howling attacks from their constituents, choose to vote down every proposed single safety measure that would make their fire-ravaged community safer.

Walker is also tremendously savvy about how she structures her film. It’s not until 40 minutes into its two-hour running time that Bring Your Own Brigade pivots to a macro-environmental framing, or even really mentions the words climate change. This framing, as well as her overall evenhanded approach, adroitly advances the movie’s basic thesis — fire is a natural problem, but the severity and frequency of these fires is quite possibly not — and keeps the film from ever tipping over into the type of mopey-dirge vibe that too many environmentally-focused documentaries succumb to. It is, if one will pardon the deployment of the expression, a slow burn, but a devastatingly effective one — the way in which Bring Your Own Brigade connects both human action and inaction with the tragedy of so-called unforeseeable natural disasters. 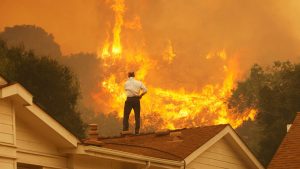