Tribeca 2022: There There Movie Review

How important is it for two actors to be in the same room for the words they say and the way they say them to have an impact? That’s a question indirectly posed by There There, an experimental film from Andrew Bujalski that involves scenes filmed hundreds of miles and weeks apart, with no actors in the same place at any time despite being a collection of two-handers. While it’s certainly a disjointed experience which does little to hide its production strategy, it does provide an intriguing analysis of what drama really is and how it can be pulled off under unusual circumstances.

Each vignette within There There features two people, and, in most cases, one of them shows up again in the subsequent scene. First up are two people who have just slept together rehashing their night, and after that, the woman goes to speak with a friend of hers, who then goes in for a parent-teacher conference. The connective threads are not crucial and become less relevant as the film goes on, but they are there to keep audiences invested and to underline the fact that there is something to their structure rather than just being a collection of unrelated moments.

The camerawork and editing are quite skillful in framing each scene as if the actors really together. What gives it away is that each has a distinctly different background, where the color of a wall might not be the same or a chair made be made of an entirely different material. Paying attention to that level of detail could have created the illusion that they were indeed together, yet this film freely advertises how it was made, and it adds a new level of impressiveness to its actors’ performances that they are able to convincingly carry a scene without a partner being physically present.

The cast assembled here is very strong, and opening with Lili Taylor and Lennie James is a particularly formidable choice. They are both actors with lengthy resumes and a range of roles under their belts, and here they bring an honest intimacy that paves the way for a very accessible experience, even if audiences wouldn’t ever be able to relate to the situations in which these characters find themselves. Among the other standouts are Annie LaGanga as a woman whose two scenes find her shifting her attitude in a fascinating way (and are best experienced with no prior knowledge), and Molly Gordon as a teacher bearing the brunt of an angry – and unkind – parent and then turning the tables on her next encounter after enduring that stress.

Not all scenes are equally effective, however, which makes for an uneven viewing experience. The dependable Jason Schwartzman is featured in two segments that don’t adhere to the same rules as the others, and suffer as a result. In the first, he video-chats with a client, which takes away the dimension of person-to-person interaction in the same place that is artificially constructed by this filmmaking process and inserts an unnecessary barrier, and in the second, he is visited by a ghost, which also feels like an out-of-body experience, but for the wrong reasons.

There There is indicative both of the future of experimental filmmaking and the way in which the COVID-19 pandemic has changed production protocols. While some have gone to extraordinary lengths to stage large crowd scenes thanks to rigorous testing and strict adherence to safety, this is a more low-key, grassroots approach that could be easily adapted in so many ways. This brings the camera to an individual actor, wherever they are, and weaves a narrative that inherently involves construction but also speaks to the beautiful simplicity of people having conversations that can resound even if the way they’re actually happening is far from natural. 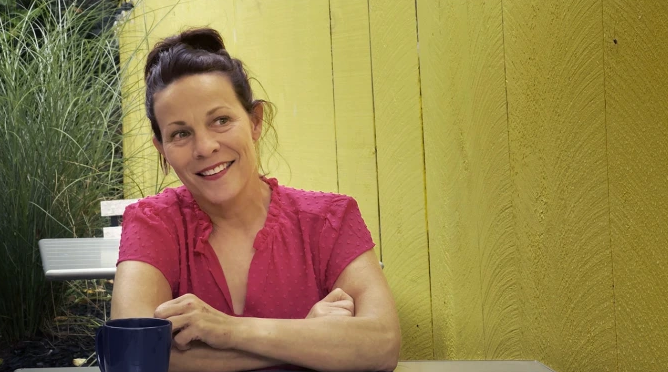