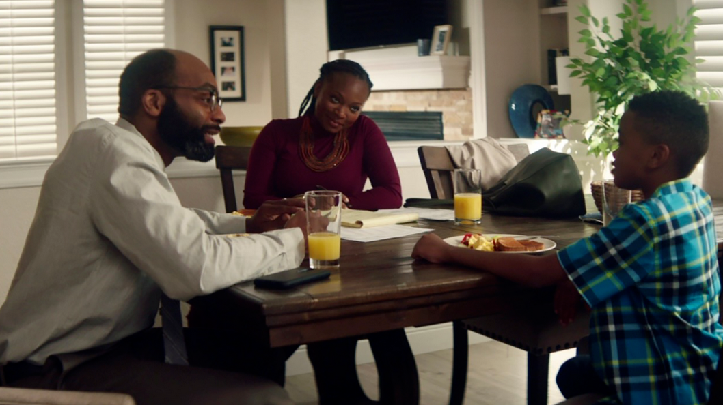 There are many people who don’t trust politicians, and for good reason. Far too many who have been elected to political office have abused their powers, manipulating the process to get elected in the first place or taking advantage of the access and resources they have once they have attained the position. Restoring confidence is an arduous task, and it’s rarely helped by the avalanche of false promises uttered repeatedly on the campaign trail that are suddenly forgotten once the election is won. 88 imagines an even darker circumstance, where a presidential candidate is being supported by shadow elements he doesn’t even know exist.

At the center of this political thriller is Femi Jackson (Brandon Victor Dixon), who works as the financial director for One USA, a political action committee backing Harold Roundtree (Orlando Jones) for the Democratic presidential nomination. His work gets infinitely more interesting – and disturbing – when he sees a series of donations that suggest outside influence, and he works with an investment blogger, Ira Goldstein (Thomas Sadoski), to uncover their source, leading to an unsettling pattern of funding that suggests that an organization with entirely undemocratic and anti-progressive aims is pulling the strings.

88 is the kind of film with the potential to be used by conspiracy theorists to support their own ideas, showcasing that even liberal Hollywood is paranoid and thinks someone is out to get them. Its questionable entertainment value aside, this film avoids the issue of voter fraud and instead focuses on the greater question of election integrity, and the idea that even the most seemingly pure politician is not immune to a hunger for power, one which will push them to take whatever money they can get, regardless of whether it comes from a place that contradicts their entire belief system.

One thing that 88 does posit which doesn’t align with most widely-discussed conspiracy theories is that it’s not some wealthy liberal or a Muslim terrorist at the top. Instead, the enemy is white supremacy, one that, in this film’s world, has become so embedded in the American system that it has managed to exist unchecked since support for the Nazi regime was something that was merely an acceptable political position. It’s hardly uplifting to consider this possibility, especially given the increasingly visible presence of neo-Nazis in actual American society, but it’s at least positive to see that the true enemy here is the one that most often manages to get away with it.

This is a film that feels like it wants to emulate classics like All the President’s Men that unfurl a plan involving many people at high levels of government and the complicity of many mid-level operatives who just went along with it rather than try to resist. The latter is on full display here, and Jackson is the emblem of the pursuit of truth, intent on uncovering it even if it will certainly put him in danger. The knowledge that it would be impossible to fully dismantle what has existed for decades is there, but Jackson is not content to do nothing and must do what he can to start breaking down a toxic structure.

88 presents some intriguing ideas in a messy way, charting Jackson’s investigation with Goldstein as he consults with his bosses to determine how to deal with what he has found. Interspersed are interview segments between Roundtree and talk show host Ron Holt (William Fichtner), who presses him to answer his questions and address the contradictions in what he says and what he does. 88 attempts to be righteous and judgmental at the same time, creating a scenario where it’s impossible to win or to be truly good. That may be the way things really are, but it’s hardly an optimistic perspective.