Sep 11, 2022 #FRIENDSHIP, DISTURBED CHILD, DOMINION, I AM LIKE YOU, LONELINESS, MONTANA, WOLFDOGS 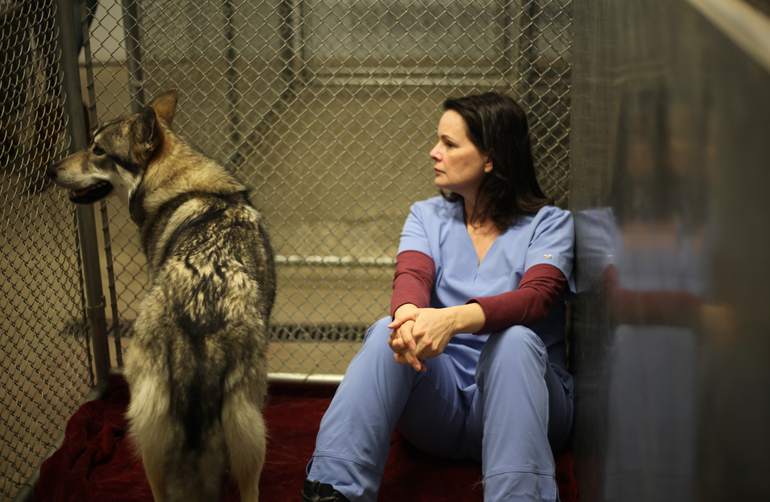 As a kid, my favorite movie was Fred M. Wilcox’s 1943 MGM picture “Lassie Come Home,” which, to me now, decades later, is the greatest film ever made about dogs. The title character is sold by his destitute family and determines to trek from the new owner in Scotland back to his home in Yorkshire. I still use up Kleenex now when I watch it.

“I Am Like You” has just a little in common, about a child with a physical and emotional disturbance that finds him with difficulty breathing, with no friends, and with his only healthy attribute that he hates school. But parents beware. This is not a movie for children. In fact it may not be a film for adults either, unless prospective viewers have no problem with a movie as depressing as the Montana in which it is filmed. Written and directed by Haik Kocharian, whose “Please Be Normal” is about a struggling playwright and his expecting girlfriend, “I Am Like You” comes across the screen with virtually no music in the soundtrack (its best feature) save for a somber piano and melancholy violin.

At home with his single mom Joelle (Terra Mackintosh), Sean (Curtis Butterfield) skips school and treks around the neighborhood, which consists of wide empty spaces, as rural an area as you’ll find. His life is going to change, because he makes friends with Lucky, a wolfdog who is the product of a marriage between a domestic dog (canis fimiliaris), and a gray wolf (canis lupus). The two are inseparable, but as you can predict, the boy is going to lose her, at least temporarily.

During the loss, director uses the time to play the depression card, hoping to win over the kind of audience suited for a downer. A wolfdog is caught in a trap after indulging in raw, frozen meat used for bait. Dennis (Johnathan Hyett), a local redneck, employs his dogs in fights with only his human opponent and competitive dog in the audience. He loses both matches. A rancher on horseback (Merril Williams) finds Sean and Lucky and, determined to kill wolves, asks Sean whether his friend is a wolf. Diana (Gwen Massey Tietz) has ALS or Lou Gehrig’s disease, and hires the local veterinarian Susan (Stacy Edwards) to assist her in suicide. Why? She’s not paralyzed, but she can no longer hold a toothbrush.

The overlong picture for no reason that I can see changes the time line backwards and forwards as though further to confuse the audience as to how these disparate, gloomy events, come together. It’s not until the final minutes that we listen to a preacher in church quoting Genesis: 28 reminds me of the final lines in Coleridge’s “The Rime of the Ancient Mariner,” which goes “He prayeth well who loveth well/ Both man and bird and beast/ He prayeth best who loveth best/ All things both great and small.”

How wonderful this movie could have been, all of it illuminating the idea in the opening book of the Hebrew Bible, that God’s gift to mankind of dominion over the animals does not mean domination. Alas: the seemingly unfocused actions coupled with unnecessary time reversals make watching this film a chore despite its capable ensemble performances. Montana may be calling, but I’ll stay in New York.