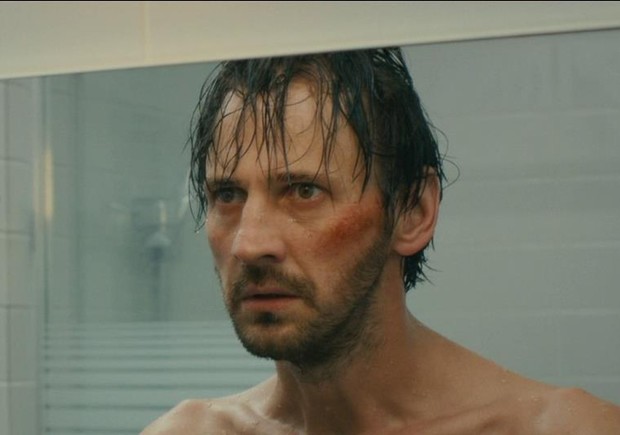 Film buffs have come to accept that movies out of Romania are likely to be noirish albeit with occasional humor. So far as humor is a part of Bogdan George Apetri, the director opens the film with a lame joke by Comisar Sef (Vasile Muraru) the police chief in a small Romanian town, speaking with Florin Iespas (Bogdan Farcas). Says the chief to his unsmiling inspector, a man with ambitions to join the police force takes an oral test.

That night he tells his girlfriend about the test bragging that he not only passed, but that the chief already gave him an assignment to find a killer.

The film ends with an even lamer joke, but between the two alleged gags, there’s a lot of noirish sentiment focusing on police inspector Florin, obsessed like Victor Hugo’s Javert, ordered by the chief to take a week off since the man is run down from overwork. Because the chief will not take another detective off the case and give the credentials to Florin, Florin is more intent than ever to undercut his colleague and solve a case.

Apetri’s “Miracle” about a young nun who never makes it back from tending to an urgent matter shows the Romanian-born director as a man whose mind is on police matters. With “Unidentified,” he contributes a story about a detective who ostensibly is determined to solve an arson case. Florin figures, like his racist colleagues in the police department, that Banel (Dragos Dumitru), an illiterate Roma (the term “gypsy” is considered politically incorrect), must be the guilty party. After all he is the security guard of the owner of two hotels and assumes that the guy’s boss told him to torch the buildings for the insurance. With Bogdan Farcas’s character Florin in virtually every frame, we see that Apetri’s aim is an intense character study of a flawed individual.

The unsmiling, unshaven cop, straight hair flopping over his forehead, is in financial trouble, which thickens the plot, as he appears unable or unwilling to live on his salary, owes money to the bank, and may soon have his car repossessed. His estranged wife Stela Bercaru (Ana Popescu) is a musician, allowing the film to intercut aerial shots of the town with exquisite classical music. The pace picks up dramatically in the second half of the policier, as Florin, having browbeaten the poor Roma, reverses character and moves to set him up with a better job.

“Unidentified” is all about the principal character, whose bitter expressions, often air of desperation, and manipulations to solve the case, lead him ultimately to his real goal. Already looking like a scarecrow, as his boss calls him, he winds up with cuts and bruises on his face and a painful shot in the shoulder. Farcas delivers an intense performance for a police drama like few others.

Oleg Muti filmed the proceedings in Romania’s Pietra Neamt in the historical region of Western Moldavia. In Romanian with English subtitles.