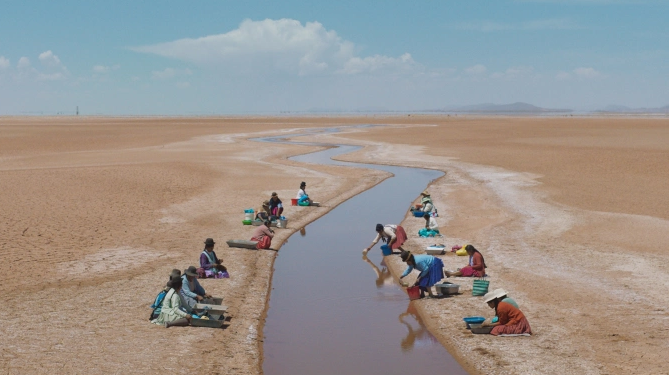 Nowadays in the U.S., people are divided between those who like Republicans and others who favor Democrats. That’s not the only split. Folks are either owners of iPhones who spend their leisure time on the sidewalks buried in their messages or others who think (as I do) that the mostly youthful people should spend more of their time appreciating the beauty around them. On the other hand, there may be millions who do without iPhones, carrying on with the traditional trades of their ancestors. Similarly, in “Utama,” there are young Bolivians who are tech savvy and prefer to live in cities like La Paz and Sucre, and others who prefer to farm on the countryside. The major theme of the Bolivian entry to our Oscar competition is this: should grandpa listen to his grandson and leave his desolate rural home in favor of moving to the city, or should he obey his own heart and stay where he is—without electricity or running water—herding his llamas as his ancestors have done.

In one of his movies, American comedian Chevy Chase was asked what he did for a living. “Shepherd,” he replied, a response meant to be a joke (albeit a lame one), because in highly industrialized U.S., would such a category exist? Now director Alejandro Loayza Grisi, in his freshman film, wants to show you just how different a place can be when a shepherd, or in this case one a llama-herd, would be far from anything you’d see in the States. That’s just what is there for us to appreciate in “Utama,” which is Aymara for “our house.”

It’s not the kind of house that any of us would live in or aspire to, yet inside a shack on a part of a mountain 12,000 feet above sea level reside Virginio (José Calcina) and his wife Sisa (Luisa Quispe). They are old people, yet they are far from retired. In the parched area that had seen no rain in ages where there is no water in the couple’s local well, Sisa’s job is to trudge with a couple of buckets to a lake that seems like a mirage—that’s how out of place it looks—and fetch. Meanwhile Virginio grazes the llamas, though the poor flock of animals seem to have nothing growing to eat, but there’s enough to drink. (By the way llama farming exists in the U.S., a lucrative trade as the animals are used for making wool clothing of a material that contains no lanolin and therefore causes no itch.)

Their young grandson Clever (Santos Choque) is a city cat who visits from La Paz and occasionally looks at his iPhone, trying to encourage the old man to leave the hell-hole habitation and go with him to the city, especially since his chronic cough means he may need medical care. But the elderly guy simply will not move, and he will not go to a hospital in La Paz to die. Really, though, the countryside people, who look out for each other, would probably refuse to leave as well, given their camaraderie. Clever speaks Spanish, Virginio and Sisa speak Quechua. The rurals and the urbans do not have even the same language, which could be true in the U.S. as well, given the hostility of the Red states and the Blue states.

Barbara Alvarez photographs the beauty of the area, the endless plains and the morning sun, in a country that should beckon travel-happy Americans whose South American tourism may be limited to Brazil and Argentina. The principal actors had to be convinced to take part, and Calcina and Quispe do quite a good job of expressing themselves without the extensive training that professional actors go through. If there were an Oscar for ensemble acting, the llamas would walk away with it, a dignified looking bunch of animals except for the unfortunate one that gets sacrificed so that the gods who reign will produce rain. (They do.)

Bolivia’s entry to the Oscar competition is in Quechua and Spanish with English subtitles.