People who become arrogant after they secure success can begin to behave in harmful ways that not only negatively impact their own lives, but also the existences of the people who work with and for them. That’s certainly the case for several of the characters in the new dark comedy-thriller, ‘The Menu,’ notably Janet McTeer’s food critic of Lillian Bloom and her editor, Ted, who’s played by Paul Adelstein.

Lillian likes to publicly take credit for all of the restaurants and chefs she helped gain notoriety throughout her career, which Ted has become compliant with supporting. As a result, Ralph Fiennes’ character of Chef Slowik, who Lillian claims to have discovered, unabashedly reprehends the critic and her editor for embracing an establishment’s success for themselves after she helps get it discovered, rather than honoring the chef.

The film was written by Seth Reiss and Will Tracy, and directed by Mark Mylod. ‘The Menu’ was produced by Oscar-winning writer-director, Adam McKay and his frequent collaborator, Will Ferrell.

Searchlight Pictures is distributing the movie in theaters today, November 18. ‘The Menu’s official release comes after it had its world premiere at the Toronto International Film Festival on September 10.

‘The Menu’ follows a couple, Margot (Anya Taylor-Joy) and Tyler (Nicholas Hoult), as they travel to a coastal island in the Pacific Northwest to eat at an exclusive restaurant, Hawthor. The establishment is run by the reclusive, globally celebrated Chef Julian Slowik, who has prepared a lavish tasting menu for select special guests.

Hosted by the immaculately dressed front of house staff led by general Elsa (Hong Chau), the evening unfolds with increasing tension at each of the guest tables as secrets are revealed and unexpected courses are served. With wild and violent events occurring, Slowik’s motivation begins to rattle the diners as it becomes increasingly apparent that his elaborate menu is designed to catalyze to a shocking finale.

Adelstein generously took the time recently to talk about starring in ‘The Menu’ during an exclusive interview over Zoom. Among other things, the actor discussed that he accepted the role of Ted in part he felt the script was smart, funny and scary, and he also wanted to have the opportunity to work with Mylod, Fiennes and the rest of the cast and crew. Adelstein also liked the fact that the thriller’s dark humor and satire helps keep its story grounded and realistic.

The conversation began with Adelstein explaining what inspired him to play Ted in ‘The Menu,’ and how he became attached to the role. “It was one of those scripts that when I received it, I was crazy about it. I thought it was smart, funny and scary,” he said.

“I knew that Ralph was already playing the role (of Chef Slowik), as it was information that I received when I got the script. That was really helpful because you could hear it in his voice. It felt like such a good fit,” the actor also shared. “That helped (me) understand how the whole thing was going to work.

“I then read for it and got a certain take on it. Then the next day, I said, ‘I want to do it again. I like how I did it, but I think there’s another way to go.’ So I did it a different way,” Adelstein continued.

“Then a little while later, I heard that Mark Mylod wanted to meet. So we had a Zoom meeting and talked, and I read for him, and then they asked me to do it at the end of the day. That was it, and then I was off to the races,” the actor added.

Further speaking of Mylod, Adelstein then delved into what his experience was like working with him as the dark comedy’s helmer throughout the production. “I was such a fan of his work. I’ve also known some people who have worked with him before, and they spoke so highly of him, so (getting to work with him on this film) was so exciting,” the actor shared.

“From the very beginning, he really stressed that he really wanted (the film) to be a collaboration with this big cast,” Adelstein continued. “He mentioned some movies that he thought could be a touchstone for this movie. So we watched and talked about those.

“He then did this interesting thing where he sat down with us a group as pairs – the different pairs at the table. He dug into what the dynamics of the relationships with the pairs was like, which was interesting,” the actor divulged. “We knew that whoever we were with – my character’s with Janet’s character – you were going through the arc of the movie together.

“So we spent a lot of time talking to Mark about their backstories and relationship so that we could track how it was all going through the night. That was really helpful, as we did that before we started shooting,” Adelstein shared.

“Once we started shooting, he’s a very calm, fun guy. But it was an intense shoot because it was all in one place and we filmed during COVID,” the actor revealed. “But he was such a calm leader.

“But he wanted different versions, which was fun. You can do one take of a scene, and everybody’s crazy because they’re terrified. We could then do another take where everyone’s very quiet. So we got to play around a lot, and that was really fun,” Adelstein added.

Following up on what his experience was like of collaborating with McTeer throughout the production, the actor explained how they worked together, especially to show that Ted is always trying to match Lillian, but she’s in charge of their relationship. “Janet and I had known each other before we started working on this movie,” he revealed. “We started shooting a pilot together in 2020 before COVID, but COVID shut it down.

“So we had gotten to know each other a little bit, which helped. I was upset that I didn’t get to work with her then, so I felt like this movie was payback, in a positive way,” Adelstein further divulged.

“We talked a lot about how (Lillian) takes credit for Slowik’s success. There was probably part of my character that takes credit for (Lillian’s) success because (she writes for) his magazine,” the actor noted. “But she’s obviously become more powerful than he, so that was a fun dynamic to play with.

“There’s also the idea that she’s the star, so even though my character may not agree, he defers to her. I think a lot of times, he doesn’t even have an opinion until she does, which is one of the themes of the movie. It’s about genius, creative endeavors and power, and we talked about it quite a bit before we shot the movie,” Adelstein continued.

“Some of those things were improvisations, and some of them were in the script. Once we fell into that routine, it became a fun things to do. We gave Mark a few things to play with later during the editing process,” the actor added.

Further speaking of the spontaneity on the set, Adelstein then delved into what the balance was like of sticking to the script and improvising on the set. “We stuck to the script for the first few takes. But then since (the story’s mainly set) in the one room, what Mark didn’t want was for the actors in the background to not be talking.

“We weren’t phantom mining, which you have to do a lot of on films, for sound reasons. So all of the sounds and talking behind the main action is improvised,” the actor divulged. “So we would work on it and lock it down.

“He would shoot all of that because he had the idea that the camera was kind of floating, and it would pick up on different things at different times,” Adelstein revealed. “So we had to dig deep down to keep those improvs going.

“Janet and I had this really great opportunity to speak with (French chef) Dominique Crenn’s sous-chef, as (Crenn) designed all of the food for the movie. We Zoomed with her sous-chef so that we would have the proper vocabulary to talk about the food, which was really helpful,” the actor shared.

“So we had a list on our phones with descriptions of each course. That way, when it came time to those improvs, we could be really accurate about the menu,” Adelstein added.

Following up on ‘The Menu’s cinematography, which was led by Director of Photography, Peter Deming, Adelstein explained how the camera work influenced the actors’ physicality and action sequences throughout the shoot. “Mark was very clear that he wanted to keep the whole thing alive during the whole shoot. The camera rarely did the same thing two times in a row, as there was a second camera that did a lot of roaming,” the actor divulged.

“So you could see (the camera) out of the corner of your eye, but we tried not to pay attention to that. So it was just a matter of having a meal and keeping it alive,” Adelstein explained.

“This group (of actors) has done a lot of theater, so that was a natural fit for everyone to fall back into that kind of continuous performance,” the actor added.

“In terms of the physicality, one of the things that Mark said early on was to keep track of how freaked out everyone was over the course of the evening. But it’s a pretty hard thing to keep track of; you don’t want to get too scared too early,” Adelstein admitted.

“You had to figure out if you should be screaming, crying or comatose; there are so many different reactions to a situation like that. He wasn’t 100 percent sure how it should be at any given moment, so we would play with it, and then stick with whatever felt right,” the actor also divulged.

“He would do a lot of one take where he would let us do whatever we wanted and see how crazy it could get. That allowed for a lot of the physicality, which would come out of any moment we were in,” Adelstein added.

With the movie mainly taking place on the isolated island where Hawthorn is located, the actor embraced the experience of filming ‘The Menu’ on location. “Most of the restaurant stuff was shot on a set, and 90 percent of (the shoot) was there. We also went to the islands off of Savannah, Georgia (where the film was shot), and that was great,” he shared.

“Being in one space was challenging, but also really wonderful, because it adds to the terror of what’s going on,” Adelstein continued. “Those locations were absolutely gorgeous, which was a really cool things to see.”

The movies combines humor and satire about the realities of the higher class and exclusive culture in a surprising way and in a slightly heightened reality. The actor noted why he feels that emphasizing that satire is so vital in telling this type of story.

“Mark was very clear about what kind of satire he wanted, which was very naturalistic. He wanted everyone to be real and feel naturalistic in how satirical the characters themselves were. He wanted them to be recognizable and funny, but not cartoonish,” Adelstein continued.

“That was something, in terms of the satire, that we could keep our eye on, so that we could keep it grounded. That made the scary part land more, because it should feel like real people this is happening to,” the actor concluded. 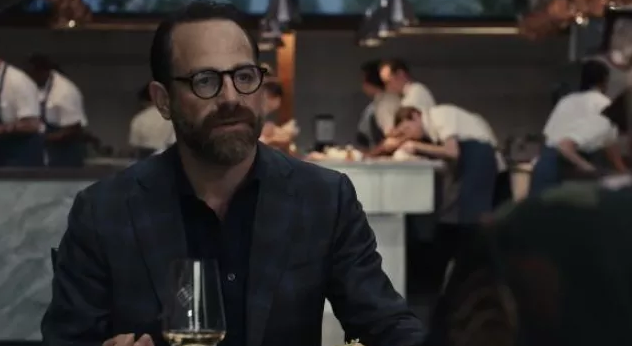