Score: Technical: 65, Acting: 60, Story: 75, Overall Score: 67% In the small peaceful town of Berkeley is a nice friendly place to live and visit, but things are about to change for the worse, they are about to get much worse. A strange meteor shower is causing the residents of this small town to change into blood thirsty, flesh-eating zombies.Â  Technically this film was done very well. The special effects were impressive;Â they didnâ€™t scream low budget.Â  The filmmakers also utilized a lot of CGI effects to bring the zombie deaths to life.Â  Undead Receives Two Skipped Beats on the Roger Moore movie scale; I was definitely let down by this film.Â  Maybe because it was extremely hyped up by other viewers, or maybe just because I am a die-hard Romero zombie fan.Â  Even thou I was let down by it and did get a little lost while watching it, It was still an enjoyable rental. Â Be afraid, be very afraid. Â 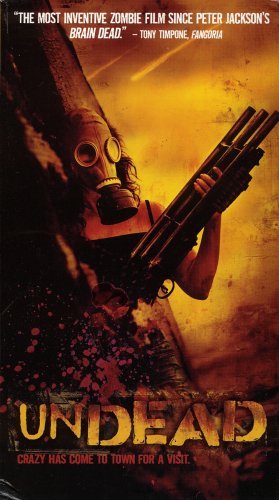