When young Charlie Brewster horror fanatic finds out that his next-door neighbor is a vampire, no one believes him, who would. When no one believes you who can you turn to, Charlie turns to Peter Vincent a washed up television actor who specializes in vampires. No one who knows Charlie is safe, and things are even worse when the vampire is aloud inside his very home.

There’s nothing spectacular about the filming on this movie it is still without a doubt one of the great classics in the 1980â€™s horror genre. The special effects were done well for their time and the transformation sequences were also really cool, as a vampire flick it kicks ass and gratefully spawned a sequel to boot. This is why this movie receives Two Skipped Beats on the Roger Moore movie scale. I love this film itâ€™s one of my all time favorite 80â€™s vampire movies. Given itâ€™s nothing along the lines of â€œLost Boysâ€ or â€œNear Darkâ€ but it is in the top three of the 80â€™s. I recommend this movie to anyone who enjoys a good vampire flick or just loves horror movies. So go out and get your hands on a copy of it today.

Click the poster to purchase “Fright Night” on Amazon.com. 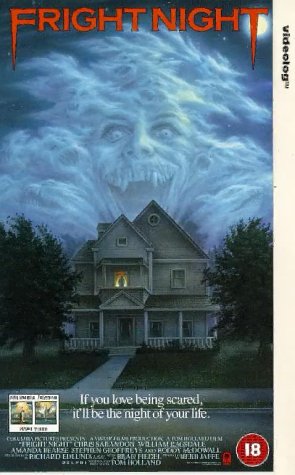