Title: Only the Young

One can certainly enjoy The Who’s “Baba O’Riley,” David Bowie’s “Young Americans” or even, to employ a more recent example, Fun’s “We Are Young” on their own musical terms, in more or less disposable fashion. But for anyone who’s ever felt a stronger kinship to those songs or others because of their sterling evocation of adolescent energy and possibility, nonfiction cinematic equivalent “Only the Young” is a film for you — a delicate coming-of-age snapshot which locates the unextinguished youth in all of us. The Audience Award winner at the AFI Film Festival, co-directors Jason Tippet and Elizabeth Mims’ film is swollen with sensitivity and sentiment, capturing in moving fashion some of the wobbly first steps of teenagedom.

“Only the Young” follows the intertwined stories of three Southern California teenagers who live in rundown canyon country. Garrison Saenz is an introspective and polite wallflower; Skye Elmore, his on-again, off-again girlfriend, lives with her grandparents since her father is in prison; and Garrison’s best friend Kevin Conaway, a glassy-eyed, socially awkward and frequently shirtless misfit, is a skateboarding fanatic who would be most at home in “Dogtown and Z-Boys.” Yet preconceived notions of these kids as aimless and empty-headed “troubled” teenagers evaporate almost immediately, upon first contact. Garrison and especially Skye are committed Christians, and Garrison and Kevin have a mentor/father figure in the form of a proselytizing skateboard benefactor. The film captures the rhythms and nuances of their friendships, and how things change both when Garrison gets a new girlfriend, Kristen Cheriegate, and it seems that first one and then two of the three might have to move away.

In both its dusty, Southwestern setting and objective telling, “Only the Young” recalls involving nonfiction offerings like “Darwin: No Services Ahead” and the engrossing web-doc series “Interview Project,” executive produced by David Lynch. Tippet and Mims, however, make superlative use of editorial cross-cutting to purposefully blur time. Direct-address interviews are blended with thoughtfully framed, gorgeously captured fly-on-the-wall scenes, and arranged in an order with more emotional than chronological fidelity.

Its subjects are engaging narrators of their own lives, and surprisingly perceptive in the manner that teenagers often are, just when one is ready to write them off as lacking any analytical prowess. The movie’s rawness and candor is its strongest selling point, but it’s often funny, too. (“Right, but rats are, like, a lot smarter than you guys,” says Skye, when urging Garrison not to leave food, no matter if it’s locked away in the pantry, in the abandoned house he and Kevin are intent are fixing up as their skate practice crash-pad.)

“Only the Young” is also notable for what it doesn’t show, and how this shades and impacts its story. Technology is acknowledged but it isn’t omnipresent, which is partially owing to the socioeconomic conditions of its subjects but also clearly an editorial choice. School isn’t shown or even much touched upon, and while family life is discussed (Skye, for instance, learns of a family secret), it isn’t the focal point of the movie.

Tippet and Mims understand that, almost regardless of individual situation, kids experience and process these variables as fixed givens — incidental details in the grander story of Themselves. The film’s intuitive editing and imaginative use of music heightens its fragility and emotional connection. The filmmakers do not impress their own narrative agenda upon “Only the Young,” but instead allow the accumulated significance of certain anecdotal, throwaway tidbits (Kevin is a cutter) to more naturally color a viewer’s interpretation, understanding and acceptance of these characters. The unique result is a stirring portrait of the contradictory innocence and rebellion present in all adolescents, not just these “alt-minded” kids on the fringe.

NOTE: In addition to opening this Friday in Los Angeles at the Downtown Independent, “Only the Young” also plays January 3-5 at Cinefamily. 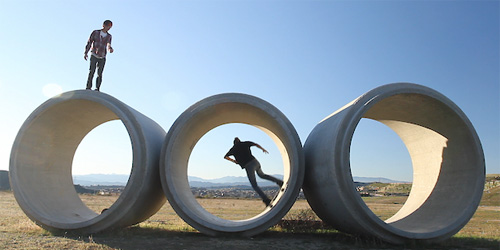