It’s called “Texas Chainsaw 3D;” you just can’t be expecting anything revolutionary from John Luessenhop’s latest and if you are, you’ve got much bigger problems than being disappointed by another blood-soaked, subpar horror remake.

After Sally Hardesty escapes the Sawyer family in the original “Texas Chainsaw Massacre,” she alerts the local police and Sheriff Hooper (Thom Barry) drives out to the house to investigate. But before Hooper can get the Sawyers to surrender in a calm and orderly fashion, the Newt townsfolk riot, shooting the Sawyers and burning their house down.

Twenty year later we meet Heather (Alexandra Daddario). One day she gets word that a grandmother she’s never met has passed away and that she needs to travel down to Texas to sign some papers and accept her inheritance. Turns out, she’s the new owner of a gorgeous Victorian mansion. Trouble is, that mansion isn’t exactly a prime play spot for her and her friends. That mansion already belongs to someone else.

As much as we’d all love to see a horror remake that truly honors the original, “Texas Chainsaw 3D” goes a bit too far. We’ve got tons of little nods to Tobe Hooper’s film like, well, the name Sheriff Hooper, and then we’ve got quite a few more substantial elements like a play-by-play of the 1974 film that runs during the opening credits. For hardcore Leatherface fans, most of the homages are far too blatant to appreciate and for newcomers, few are woven well enough into the narrative to serve much of a purpose.

The writers take the throwback idea one major step further by not just using elements from the original to tell a new tale, but rather to continue the old one in a way that sheds new light on Leatherface, much unlike the recent “The Texas Chainsaw Massacre” and “The Texas Chainsaw Massacre: The Beginning.” Does it work? Yes and no. The script is clunky through and through, but the ideas and scenario the narrative proposes is intriguing. Had the earlier portions of the film earned the grand finale, “Texas Chainsaw 3D” would have made for a surprisingly thoughtful installment.

However, this iteration of Leatherface is quite reminiscent of “Halloween II’s” Michael Myers. He’s primarily a one-note, faceless character that simply runs around, senselessly beating people to death. While that should be no big deal in a slasher film, Leatherface’s kills are far from original and often repetitive. Of the bunch, violent highlights include a post-car accident attack and the vibrant imagery during a town carnival chase sequence.

But even when the script does try to present the good guys and Leatherface as real people rather than your typical horror movie players, the details are often swallowed up by overcomplicated writing. If you’re going into the film blind without ever having seen a trailer, it could take time to figure out exactly what Heather and co. are up to. Is it Texas or New Orleans? What exactly does it say on the paper Heather receives? Where are the kids coming from to begin with? Some of the details do come together, but far too long after you’ve asked the questions.

Without treading into spoiler territory, there are also quite a few wonky details with Heather’s personal situation. Daddario offers a solid performance, but there’s clearly a section missing in the character’s arc, which makes the tail end of the film a little hard to digest. Another bummer for Daddario is that Heather’s wardrobe is so unnecessarily revealing it’s distracting – a distraction guys looking for some eye candy will likely welcome. As for the rest of the cast, most are doing the typical running around, screaming for their lives thing, so it’s a lot of the usual, but Trey Songz does deserve a little bit of credit. The guy can act and actually offers up one of the film’s more natural characters.

So now for the obligatory horror movie remake question – is “Texas Chainsaw 3D” worth it? The answer to that would be a big fat no, but we’ve also seen worse. As far as mindless gore goes, the film is absolutely harmless and should hold you over until “Mama” hits on January 18th, and hopefully that’ll keep us happy until “Dark Skies” on February 22nd. 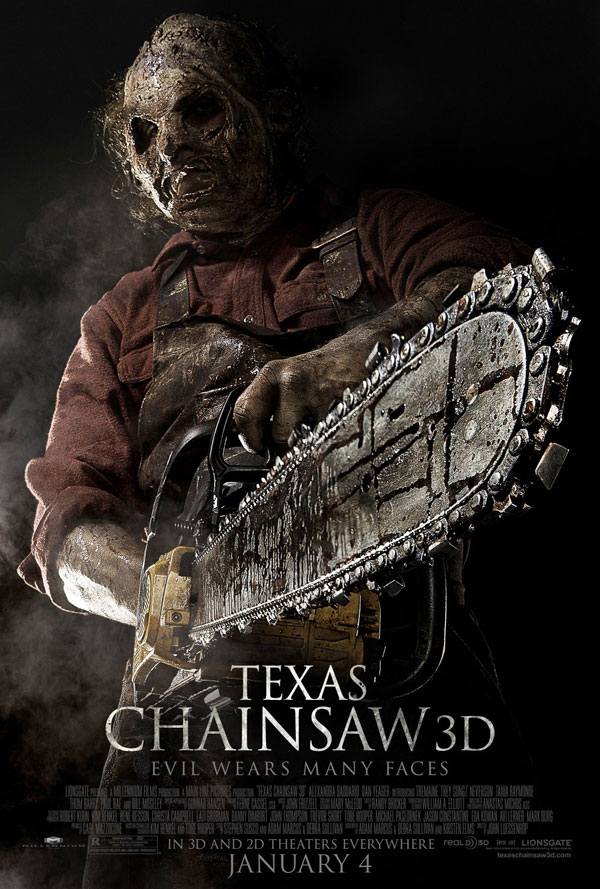