As a diehard music fan, I have a tendency to be introverted from time to time. Whether it be the lyrical depth or the spatial instrumental sounds of a song, I find myself in floatation until the gravitating nature of a catchy tune reels me back into reality. These dual capabilities of music are what make the art untouchable in the entertainment world.

Illuminating my extroverted side is the latest album, “Notes From The Underground”, from the masked group, Hollywood Undead. The outfit’s third studio album dropped January 8th via A&M Records/Octone. Comprised of Johnny 3 Tears, J-Dog, Charlie Scene, Danny, Funny Man, and Da Kurlzz, Hollywood Undead released their near platinum debut, “Swan Songs,” in 2008 and their sophomore album, “American Tragedy” in 2010.

Cultivating their signature style of tactfully mixing rock and hip-hop, Hollywood Undead has further solidified their fearless persona within the industry. Produced by Griffin Boice, Sam & Sluggo and Danny Lohner, “Notes From The Underground” exudes the eclectic band’s ability to infuse dynamic rhythm within an album. One track may be heavily rock influenced, the other hip-hop, the other rap and the other an equal blend of the three genres. No matter the styling selection, Hollywood Undead still hone in on a cohesive sound throughout a song, making it both lyrically and instrumentally memorable.

The lead single off the album, “We Are”, kicks off immediately with the chorus, which serves the track well with the melancholic wording, “We are, we are, we are made from broken parts.” The anthem illustrates the importance of a band knowing their craft. “We Are” could have easily gotten lost within the first chorus to rap transition, but the overall passion of the song keeps it well above the surface.

Hollywood Undead have a knack for opening songs with alluring tempos and inviting yet cryptic lyrics, such as with tunes, “Lion”, “Dead Bite” and “Outside”. The sextet is able to make that genre switch on these tracks, as well as with “We Are”, in a not jarring fashion, which once again keeps the fluidity of the songs and gives them mainstream appeal.

As an avid fan of ego hungry male groups toning it down for slower-tempos, I fell right into the trap of the songs, “Believe” and “Rain”. As calm as Hollywood Undead can get, these tunes add diversity to “Notes From The Underground” and positively contrast with hefty numbers, such as “Another Way Out” and “Pig Skin”.

Checking just about every musical arrangement off of the list, Hollywood Undead deliver an 11 track album, which can slap a smile onto the most brooding emo fan. 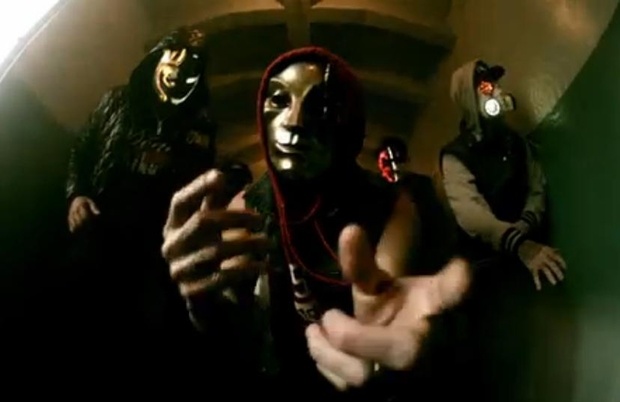 Hollywood Undead Let It All Out