Highlighting the intense, stressful realization among childhood friends that their careers and relationships with each other and their families haven’t turned out the way they had hoped can be a challenge for many filmmakers. But first-time feature film writer and director Tom O’Brien succeeded in capturing the resentment and feelings of failure young adults often feel in his new comedy-drama ‘Fairhaven.’ Shooting the movie on a low-budget in the location that inspired the story, and forgoing the stunts and effects that would take away from the characters’ motivations and emotions, truly helped emphasize the pain the three main characters are all feeling.

‘Fairhaven,’ which is set in the small fishing village on the Massachusetts coast of the same name, follows three high school friends who reunite for one of their father’s funerals. Jon (played by O’Brien) is a former high school football star who has landed back in Fairhaven, and has decided to quit his fishing job to focus on his writing career. But he’s at a crossroads in his life, as he’s looking for purpose and meaning in everything. He’s inspired by an interview with his football hero, Tom Brady, who proclaims that even after achieving his professional and personal goals, he feels there has to be something more to life.

Single father Sam (portrayed by Rich Sommer) never left town, and is the most responsible of the three friends. Still trying to get over his ex-wife, Kate (played by Sarah Paulson), who has remarried, Sam is still the most content in life. While he’s happy raising his daughter on his own, he still wishes he could have made his marriage to Kate work.

Meanwhile, Sam and Jon await for Dave (portrayed by Chris Messina) to return to Fairhaven for the first time in 10 years for the funeral of his estranged father. Dave is forced to revisit everything he ran away from in his youth, as he continues to portray himself as loving his easy-going life in Phoenix. After spending the weekend together, the three friends are still trying to find their way, but realize they’ll always have each other, and it’s always good to go home.

O’Brien, who wrote the script for the comedy-drama, based on an idea he worked on with Messina for over six years, created genuine characters who were still struggling to discover the answers they so desperately wanted to find. From Jon questioning whether he could truly find a fulfilling romantic relationship and start a writing career in which he could express his feelings of self-doubt and longing to be loved to Sam’s persistence of putting everyone else’s happiness over his own, the two characters distinctly learn how to embrace their lives in Fairhaven. They don’t consider living in their hometown to be holding them back from pursuing their dreams, but both matured as they outgrew their seemingly mundane jobs and existences. Jon and Sam both subtly emotionally grew over their weekend together with Dave, learning from him that if they don’t fix relationships and go after what they want when they have the chance, which he failed to do with his father, they may never be given the opportunity.

Dave, contrastingly, insists to his friends that he’s living the life he’s always wanted in Phoenix, running a nightclub and not seriously committing to any particular woman. While he initially appears reckless in his decisions when he arrives back in Fairhaven, even going so far as to accuse Jon of fully living the life he desires, Dave also comes to realize in his own way that he has fix his life as well. After having a heart-felt conversation with his mother about why her marriage to his father didn’t last, and seeing how happy Kate, with whom he had a past relationship with, much to Jon’s surprise, is in her new marriage, Dave finally comprehends the long journeys people must undergo to find their true happiness. Dave experiences the most subtle, but important, emotional journey in the film, as he finally realizes that he has no control over who or what will make him happy, and how long it will last.

While filmed on a limited budget largely in the town that inspired the story, the sets and photography in ‘Fairhaven’ brilliantly showcased the alienation the three friends felt as they struggled to find what truly makes them happy. O’Brien showed the genuine middle-class neighbor that shaped Jon, Sam and Dave’s determination to find fulfillment by shooting in the middle-class homes and bars the townspeople truly live and spend time in. While to some degree they all aspire to lead a grander life, their homes and the places they hang out in aren’t extravagant, and instead are filled with photos and other belongings that hold sentimental value for the three friends.

Cinematographer Peter Simonite also emphasized O’Brien’s intention of showing the three friends maturing at their own paces while also feeling sentimental around each other by expertly switching between wide shots and close-ups. Whether shooting wider shots when Dave is first reuniting with his friends to showcase his hesitance to fully accept he’s back in his hometown or more closely focusing on the three friends’ and reactions to each other’s accusations of not living up to their full potential, the camera allows viewers to feel as though they’re experiencing the same emotions. Instead of featuring stunts or physical comedy to draw the audience into experiencing what Jon, Sam and Dave are feeling during their reunion, the intimate camerawork offers glimpses into their continuously changing thoughts and motivations.

O’Brien and Messina created genuine, realistic characters in the three best friends in ‘Fairhaven,’ who are each distinctly coming to terms with the fact that their lives didn’t turn out the way they wanted. The three all intriguingly contend with the fact that their professional and personal lives have stalled, and are pushed into going after what they want by Dave’s father’s death. The subtle character development is aided by the director’s smart decision to shoot the film in the real locations that make up life in the coastal Massachusetts town and Simonite’s captivating cinematography of the friends’ unexpected reactions to each other. The comedy-drama is an insightful and emotional look into the way friends and families treat each other in times of need, and will surely leave viewers questioning what they hope to accomplish in their own lives. 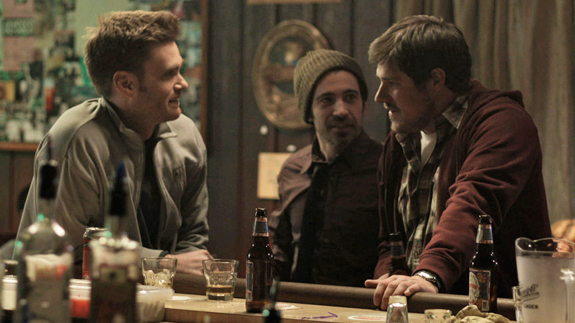