Shockya readers mark your calendars for the release of Pyyramids’ full-length debut, “Brightest Darkest Day”, for April 9th. Comprised of Tim Nordwind from OK Go and Drea Smith of He Say/She Say, the Pyyramids’ duo is separately well seasoned in the music industry, which only expands my expectations for their spring release via the indie label, Paracadute.

Recorded in Nordwind’s basement studio, with the final tracks recorded in OK Go’s studio, “Brightest Darkest Day” consists of 11 songs, which Dave Fridmann (Flaming Lips, MGMT) and OK Go’s, Dan Konopka mixed. A three-song samplar of the album is now available on SoundCloud. These tidbits of the songs, “Don’t Go”, “Smoke and Mirrors” and “That Ain’t Right”, cohesively display the styling of Pyyramids, which incorporates elements of electronic pop mixed with indie rock.

Typically, I tend to veer away from comparing one band to another, but with new outfits, drawing similarities is difficult to evade. The sound of Pyyramids strikes a chord with that of the Canadian quartet, Metric, largely due to the blending of electronica and rock to exude a dreamlike feeling. This magnetic ability of both bands is undeniably enthralling and allows you to listen to the music mentally unrestrained.

Previewing material off of “Brightest Darkest Day” at this year’s SXSW, Pyyramids will continue to tour in support of their debut release. The outfit will be announcing tour dates shortly.

For the latest news on Pyyramids, head on over to the group’s Facebook Page. 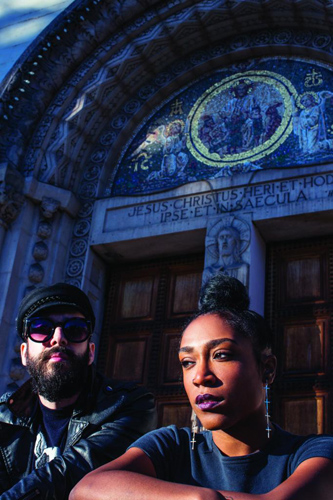