It’s been a long, tough road for the action heroes of yesteryear. While most have been jettisoned to direct-to-video hell, Arnold Schwarzenegger avoided that by taking on a seven year stint as governor of California. It’s tough to say if he would have been sent to that like his contemporaries were, but if The Last Stand is any indication, he likely wouldn’t have been. And while we’re experiencing an action renaissance, kick started by Sylvester Stallone’s Expendables movies, maybe action fans aren’t ready to let go of their titans just yet.

A lot of why The Last Stand works lies in Andrew Knauer’s script. He’s in on the joke, and doesn’t try to dip the film into super serious territory. He also gives every character a moment to shine, even if it’s through a death scene or just to be comic relief. You like these people, and want to see them make it out of this ordeal OK. Knauer opts to entertain as opposed to give life lessons, and there he succeeds in spades.

But it wouldn’t mean anything if the director was just about cool action pieces, and nothing more. Luckily, Kim Ji-woon gets the tone of the film. Much like everyone involved, Kim’s tongue is firmly in the side of his cheek, having a good bit of fun here. And when it does become time to shoot the action, Kim shoots it intensely coherent, allowing us to take in what’s happening, sparingly relying on shaky cam and close-ups. And oh, how glorious all the carnage and bloodshed is.

The big attraction though, is the return of Arnold Schwarzenegger, and what a return it is. If his runs in Expendables 1 & 2 were warm-ups, this is the big bang we’ve been waiting for. It feels as though Arnold never left, posing and posturing like the seasoned veteran he is. When it comes time for the Governator to open that can of whoop ass, he goes balls to the wall. In one film, Arnold makes up for all the action he left behind for seven years. While this might be his ‘last stand’, Arnold shows no signs of slowing down anytime soon, even when he’s having his big, climatic showdown with Eduardo Noriega.

The supporting players all play up their parts expertly well, especially Johnny Knoxville’s Lewis Dinkum. While he can go a little over-the-top, he’s a fine foil to Arnold’s straight faced Sheriff. Jaimie Alexander and Rodrigo Santoro have fine chemistry as two deputies who have an on-and-off relationship, balanced by Zach Gilford as a mediator and young, aspiring cop-to-be. It’s also nice to see action veteran Peter Stormare crop up and play one of the most fun villains in quite some time.

And that’s all this movie is about; having fun. Where men in tights dominate the summer movie market, The Last Stand reminds us of a time when guns, explosions, and one-liners ruled cineplexes. If the Action Revolution is to continue, let’s hope filmmakers approach their projects with the brains, wit, and charm that The Last Stand has. For now, let’s raise our glasses and celebrate the return of a true superhero; Arnold Schwarzenegger. 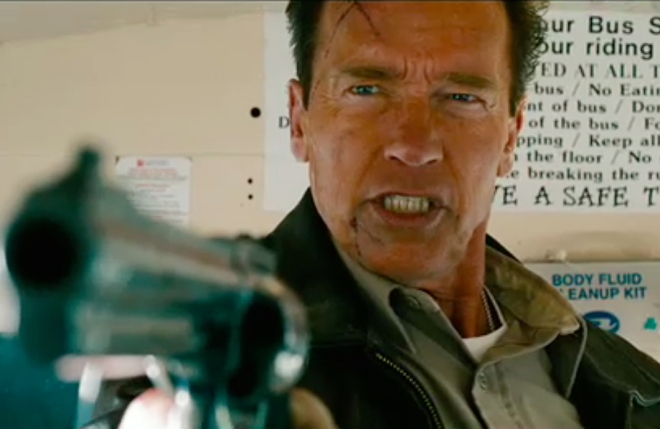