A loving tribute to European silent films of the 1920s, writer-director Pablo Berger’s “Blancanieves” repurposes the classic Brothers Grimm fairy tale of Snow White, telling the tale of an oppressed daughter of a great toreador who runs away with a circus to find her destiny. The Best Foreign Language Film Academy Award submission from Spain (its intertitles come in subtitled Spanish), Berger’s fetching film is a reminder that cinema need not be constrained by words — that there is a universality to images, and stories can just as readily be told via a skillful ordering of those.

Unfolding in a romanticized Seville, “Blancanieves” opens on beloved and talented bullfighter Antonio Villalta (Daniel Giménez Cacho). When his career is cut short and his family upended, he remarries Encarna (Maribel Verdu), who slowly but surely cuts off his daughter from Antonio. Years later, the now-grown Carmen (Macarena Garcia) escapes and joins a motley troupe of traveling, bullfighting dwarves, where her latent talents and natural beauty attract attention and, eventually, bring her back into contact with her stepmother.

Winner of the Grand Jury Prize at the San Sebastian Film Festival and the Cine Latino Award at the Palm Springs International Film Festival, “Blancanieves” is destined to be dogged by comparisons to “The Artist,” nevermind that Berger’s film was scripted around eight years ago, not long after the completion of “Torremolinos 73.” In actuality, though, excepting the macro similarities, the two movies are actually stylistically quite different. There’s just a pinch of almost subliminal S&M kink to Berger’s vision, to go along with its cultural specificity.

Working with cinematographer Kiko de la Rica, whose black-and-white frames achieve a captivating luminosity, Berger has a clever and playful sense of visual storytelling — match cuts from a moon to a communion wafer, for example — that renders the lack of dialogue a moot point. Fernando Franco’s slick, smart editing additionally greatly benefits the picture, and Berger furthermore matches it a winning score from composer Alfonso de Vilallonga.

The performances, too, are engaging. Garcia, who sort of resembles a cross between Claire Forlani and Alanna Ubach, has a beautiful and naturally sympathetic visage, and Verdu shines as the sinister, scheming Encarna. This isn’t a movie for everyone, but arthouse cineastes and others who took a flier on “The Artist” last year should seek out the rich, rewarding “Blancanieves” as well. 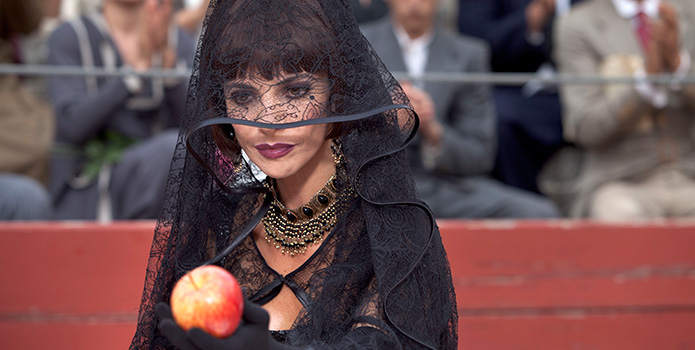