The previous film from director Jeff Nichols was Take Shelter, a magnetically haunting story of a man struggling with mental illness and trying to avoid losing his grip on reality. For his third feature film, Nichols takes an external approach, showcasing a very adult story through the eyes of two teenage boys in Arkansas whose encounter with a mysterious man on an island leads down a dangerous road. The same intensity and underlying sense of dread can be found in this entirely different film, which frequently inserts humor into a story filled with violence and very real life-threatening situations.

Before the title character appears on screen, we meet Ellis (Tye Sheridan) and Neckbone (Jacob Lofland), both of whom spend their extracurricular hours helping Ellis’ father Senior (Ray McKinnon) and Neckbone’s uncle Galen (Michael Shannon) sell and catch fish, respectively. Determined explorers, Ellis and Neckbone are first seen navigating the vast waters on which they live, which bring them to an island which boasts a boat stuck up in a tree. After investigating its contents, they find that a man is in fact living within it, none other than the charismatic Mud (Matthew McConaughey). Ellis and Neckbone soon learn that Mud is a fugitive from the law, and begin to help him on his quest to be reunited with the love of his life, Juniper (Reese Witherspoon), and to make a clean getaway from both the police and the bounty hunters on his trail.

Mud is much more than a story about a bond between a child with his head in the sky and a criminal who seems unthreatening. Ellis’ complicity in Mud’s escape attempt is driven by his firm belief in true love. Fully cognizant of the fact that his parents, Mary Lee (Sarah Paulson) and Senior, are having martial problems, Ellis finds himself captivated by an older girl, May Pearl (Bonnie Sturdivant), who does not quite return his affection. Ellis invests himself fully in Mud’s cause because he can tell from the way Mud talks about Juniper that they are meant to be together. It is an astute, mature observation for such a young man, and it is hard not to be entranced by Ellis’ passion.

Though the initial encounter with Mud comes from the point of view of Ellis and Neckbone, the film’s events are seen from an omniscient perspective. Galen is seen diving in his hilariously extravagant self-made suit to explore the water, and meetings of the many assassins hired to find Mud are shown. What results is a full and complete story, with many layers and a handful of supporting characters with small, only semi-relevant roles. Each answers the call, no matter what size the part, including Nichols favorite Shannon, who plays against type as joke-cracking philanderer Galen, and Paul Sparks, who can be regularly seen as the squeaky-voiced Mickey Doyle on Boardwalk Empire, here ditching the cartoonish tone to play a more sincerely frightening criminal dead set on ending Mud’s life.

McConaughey, whose acting abilities are not always the reason he is cast in films, is the perfect choice to play Mud, who eagerly shovels canned food into his mouth and repeatedly tells the boys about his two lines of defense: his shirt and his gun. His Southern drawl is crucial to the temperament and appeal of his wild character. Witherspoon is terrific as a battered white-trash diva whose beauty is clear but whose true sentiments are not as readily apparent. The best discovery of the film is young talents Sheridan and Lofland. Sheridan makes Ellis tough and determined, stepping in to punch a bully more than once in the film, while Lofland often provides the comic relief thanks to his affinity for foul language. Both of these actors should be watched as they venture into cinema in the coming years.

It is easy to get drawn in by Mud from its opening moments, when Ellis and Neckbone gaze out at the stunning view afforded them by their surroundings. The rural Arkansas setting establishes the film’s far-off feel, where the only true connection that can be made is between Ellis and Neckbone and their new friend Mud. This is a world where children are still children but have just as much access to the wonders and the dangers of life as the adults do. Nichols has delivered a masterful and hypnotic film that uses its 130 minutes to staggeringly interesting effect. 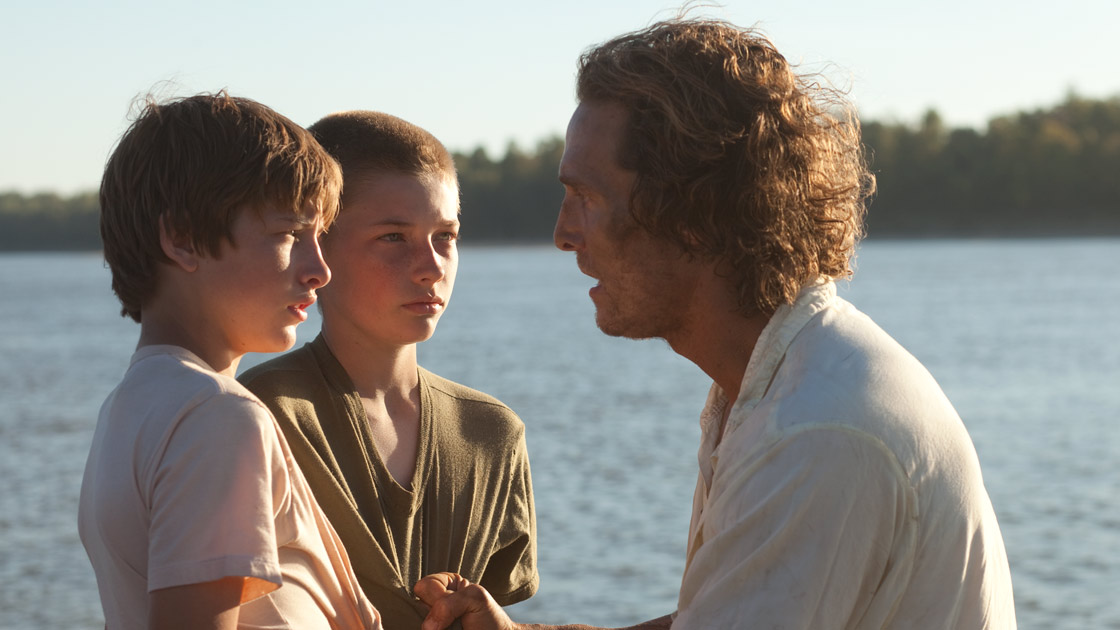