One of this year’s Oscar nominees for Best Foreign Film is among the Spotlight features presented at the 2013 Sundance Film Festival. A short title – No – refers to the ad campaign launched by the opposition to General Augusto Pinochet’s quest to remain in power in Chile in 1988. In an effort to encourage democracy, the government approved fifteen minutes of ad time for “Yes” and fifteen minutes of ad time for “No.” As the film’s opening titles explain, this is the story of the “No” side, led by the initially unwilling René Saavedra (Gael García Bernal), whose background in advertising helped create a magnificent campaign to oust the ruling leadership.

No has a distinctly journalistic feel to it, using low-definition technology to make it look like 1980s-era Chilean television. It begins as a comedy of sorts, with René hyping a beverage commercial and then coming to work for the campaign, skewering the heavy, highly critical footage presented to him in favor of a call for a return to happiness. René clashes frequently with both the creative and political factions of the campaign, and his voice, alternately loud and muted, can be clearly seen throughout the various iterations of the ads, which are shown in full in their actual original form during the film.

As the plebiscite vote draws nearer and both campaigns begin to use increasingly dirty tactics to mock each other, No takes on a much more serious tone. The “No” workers find themselves followed and intimidated, and a peaceful rally before the plebiscite is interrupted by police force. Just as the “No” campaign is transformed from an effort to create something with the full knowledge that it will not possibly succeed to the actual hope that change might in fact be possible, the film too transforms. As it progresses, No becomes a film about society and the path towards democracy.

No is composed mainly of conversations and of video images. Its conversations are intriguing because they often begin in one location and then continue, uninterrupted, in another setting. Hearing opinions from all sides is exceptionally interesting, and it’s marvelous to see video journalism at work in a historical context. The passion of the people in the country – on both sides of the issue – becomes evident from the spirit and energy captured in the commercials. Having René, in it for the creative business more than anything else, at the forefront frames it through an intriguingly detached lens.

Bernal, whose international popularity continues to be strong, has just the right sensibility to play René. When asked about being a Mexican actor portraying a Chilean at a Q & A following a public screening at the Sundance Film Festival, Bernal responded that the film tackles far more important issues. Bernal answered a question about why the film is important today by emphasizing its subversive questioning of democracy, something he believes exists to be perfected every day. “We’re all in the same moment of democracy,” he explains. “It’s fascinating how people will connect with the film through their own political reality.” Bernal and director Pablo Larraín also mentioned that screening attendees in the fall asked why the film was not being released during election season because of its current political relevance.

Addressing the true story behind No, Larraín shared an amusing anecdote about a number of people who worked on the “No” campaign, who in the film have bit roles as members of the “Yes” side. René is an amalgam of two people, and in the film, his character has the added dimension of having returned from exile, another highly relevant trend at the time. No is the story of Chile, yet it is almost universally applicable to any other struggle to have multiple opinions heard. Larraín’s stylized look at one dramatic time is an effective cinematic staging of history as well as a call to arms for the continued fight for democracy everywhere. 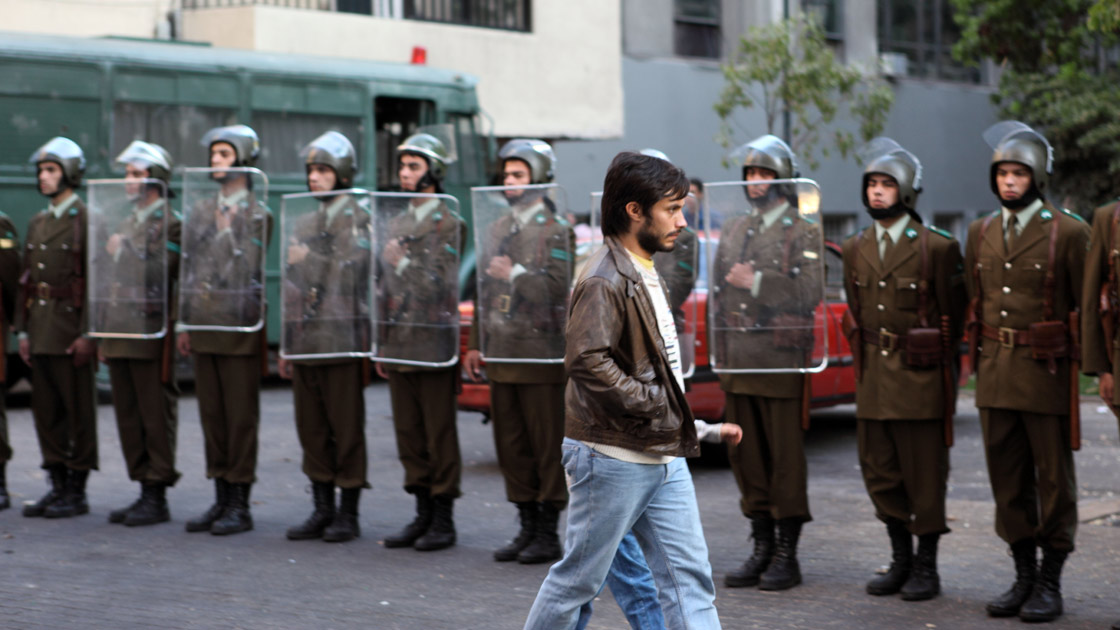