Punk music hasn’t been graced with authenticity since the beginning days of Fall Out Boy when Patrick Stump hadn’t embarrassingly made an attempt at pop music and Pete Wentz didn’t transform into an emo high school student. Thankfully, the genre is undergoing a resurrection and adding a hardcore spin to with the help of the Los Angeles punk rock band, The Bronx.

Releasing three prior albums, the quintet is set to drop their long awaited album, “The Bronx (IV)” on February 5th via White Drugs/ATO Records. The Bronx, which consist of vocalist Matt Caughthran, guitarist Joby J. Ford and Ken Horne, bassist Brad Magers and drummer Jorma Vik, first burst onto the music scene in 2002 and have continued to persist in the industry with their aggressive originality intact.

Produced by Beau Burchell, “The Bronx (IV)” features the lead single, “Ribcage”, which is streaming now on SoundCloud. The tune is available for download on Amazon and on iTunes and is also available on limited edition 7” vinyl, along with a previously unreleased b-side “Into The Black” at The Bronx’s merchandise site.

In support of their upcoming release, the outfit will be hitting the road in the UK and US. Check out the February and March tour dates at the group’s official site.

Yes, I would be happy if Fall Out Boy went back to their pre-fame roots, but if that doesn’t happen, I am more than satisfied with punk taking a hardcore direction, only if The Bronx leads the way. 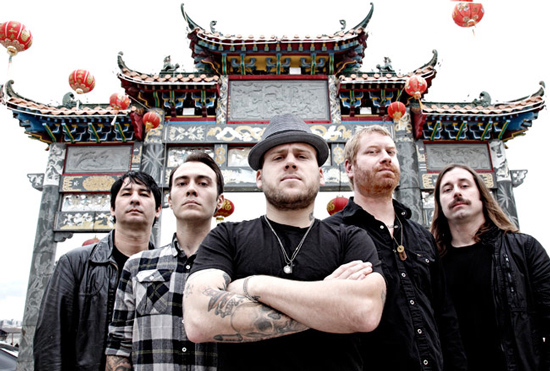