A genre-bending, psychologically twisty, meta-horror tale that played to welcome reception at last year’s ScreamFest and Tribeca Film Festivals, “Resolution” bears a deceptively simple and straightforward title and logline synopsis for a movie that is anything but. When a well-meaning guy holes up with his old junkie friend in a cabin in the woods and forces him to kick cold turkey, strange events, mysterious visitors and personal demons commingle to intriguing, ambiguous effect. A fresh conceit told with an unfussy assurance, “Resolution” marks a solid calling card for co-directors Justin Benson and Aaron Scott Moorhead, auguring good things for their respective futures.

After receiving an email with a video message and a map from his friend, Mike (Peter Cilella) leaves behind his two-months-pregnant wife Jennifer (Emily Montague) and heads into the woods, where finds semi-estranged high school pal Chris (Vinny Curran, who, with his battered American flag cap, comes across like a cousin of Judah Friedlander) holed up in a run-down house. A paranoid crack addict convinced the government is spying on him, Chris is busy shooting at birds and play-acting some fantasy life of indeterminate origin. Mike has peddled his wife a more genteel version of his planned intervention, but once he separates Chris from his gun he tases his friend and uses a pair of handcuffs to secure him to a pipe.

The plan is to hang out for a week of forced detox, after which time if Chris really wants to continue using drugs then Mike will relent on his attempts to get him into a rehab clinic. Soon, however, a series of weird incidents and contacts — involving everyone from two of Chris’ dirtbag drug buddies (Kurt Anderson and Skyler Meacham) and the Native American land owner of the house in which they’re squatting to New Age cultists and a traveling con man of some sort — upsets Mike’s mental stability. Discovering bizarre journals and audio recordings of telekinetic researchers further puts him edge, and then pictures and video of he and Chris start showing up. Are Chris’ rantings not so delusional, or is Mike perhaps suffering some sort of mental breakdown himself?

Benson and Moorhead’s collaboration is a fruitful one, evincing a well planned look and feel for the film. The latter serves as cinematographer, and the pair also edited the movie together, resulting in spare but smart mystery that straddles the line between literalism and a metaphorical tone poem. (Supervising sound editor Yahel Dooley merits a mention as well, for an assiduously constructed audio track that doesn’t pull any jump-scare levers but still makes one lean forward in their seat.)

Variously, “Resolution” evokes Christopher Nolan’s “Memento” — an obvious inspiration, with its integration of mixed media — and David Lynch’s “Lost Highway” as well as more nominally straightforward genre offerings like “Pontypool” and “Bellflower,” which each possessed rich veins of warped, unsettling jealousy and ominous vibes that come at viewers sideways. Its story is simple, yet interesting on a very basic level. And then, of course, its story is also in some ways incidental to the underlying issue of psychosis on display.

“Resolution” is honest about the impulses of addiction (“I never enjoyed life before I did drugs” is a gut-punch line of dialogue, from Chris), but could stand to have its core interpersonal conflict sharpened up some without sacrificing any of its overall narrative ambiguity. Curran’s Chris cries out for a bit more physically manifested angst and chemical withdrawal, which would help give the movie an extra jolt of energy. As is, he seems only haphazardly an addict as “Resolution” progresses, which undercuts the sincerity of its characterizations, and the essential nature of the relationship between Mike and Chris. Regardless, the movie invites at least a couple different interpretations, the heady guesswork of which makes for a rewarding experience for genre enthusiasts with an additional indie predilection. 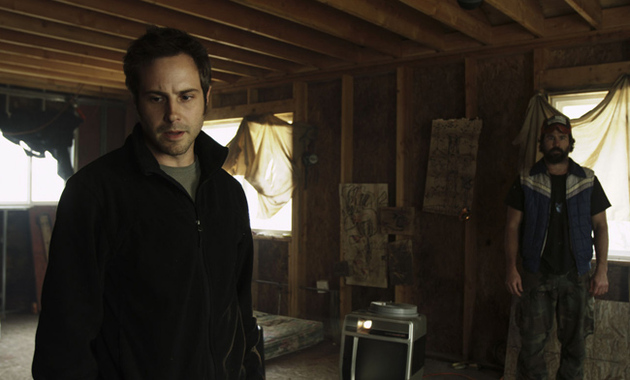