Star power is just no match for tasteless, offensive and unfunny comedy.

The “Movie 43” wraparound features Dennis Quaid as a lunatic with an abysmal script who forces Greg Kinnear’s movie producer to buy the piece at gunpoint. Coincidence? Probably not, as almost each and every sketch of this comedy anthology is so silly, nauseating and degrading it seems like the only plausible way the producers could manage to recruit so much top-notch talent.

Hugh Jackman and Kate Winslet make it through better than most. Jackman will likely never live down having a pair of testicles dangle from his neck for the sake of this movie, but between the giggle-worthy visual and the duo’s charm, “The Catch” is easily “Movie 43’s” finest few minutes. Naomi Watts and Liev Schreiber’s “Homeschooled” is another portion that at least respects its leads, but breaks down entirely when the scenario drivels on and right into a strange and unsatisfying conclusion.

The Anna Faris and Chris Pratt bit, “The Proposition,” is, hands down, one of the least successful attempts at gross-out humor in recent years, treading into such nauseating territory it could very literally turn your stomach. The Kieran Culkin/Emma Stone-starrer should have been a nice break as it goes with banter over slapstick, but this mini romantic comedy is so devoid of laughs and charm, it evokes no reaction at all – which, in a way, is quite the plus after “The Proposition” makes you want to vomit and then “iBabe” bores you to death.

“iBabe” centers on a device that’s essentially a naked woman/iPod hybrid. The skit involves an iBabe board meeting where the executives debate the controversy involving young men maiming themselves by coming into contact with iBabe’s cooling fan, conveniently located in her you-know-what. Based on this bit’s turnout, “iBabe” could have been the most miserable shoot with Jack McBrayer and Kate Bosworth repeating the same lines over and over again while Richard Gere wonders why he’s there to begin with.

“Movie 43” takes a baby step back towards better times with “Super Hero Speed Dating,” but the amusing scenario of Batman and Robin trying to pick up ladies quickly fizzles out courtesy of the lack of laughs and turn towards silly sex humor. Justin Long, Jason Sudeikis, and Kristen Bell do manage to maintain some semblance of their usual charm, but poor Uma Thurman is almost hard to look at as the least likely Lois Lane. “Middleschool Date” with Chloe Moretz, Christopher Mintz-Plasse and Jimmy Bennett finds itself in similar territory. The idea of a poor girl getting her period for the first time while with her ignorant boyfriend and his obnoxious older brother is sadly amusing, but the bit completely loses its footing when Mintz-Plasse and Bennett opt to bypass grounded quips and go straight for the maniacal and insensitive.

Based on its core concept, “Happy Birthday” should have been the easiest to identify as a major red flag back in development. Not only is there nothing appealing about the idea of a guy catching a leprechaun to give to his buddy for his birthday, but it’s expanded into something wholly nonsensical and uncomfortably violent. However, nothing in “Movie 43” is more disturbing than the end result of “Truth or Dare.” Just wait until “Movie 43” hits DVD; Halle Berry’s descent into humiliating madness will make for quite the collection of hilarious and mortifying GIFs.

As for Terrence Howard, “Victory’s Glory” never even has a chance thanks to being completely decimated by the film’s marketing campaign. Then again, “Beezel” doesn’t really benefit from the element of surprise. With “Beezel” having bypassed most of the “Movie 43” promos, when the credits and bloopers roll, you’re thrilled you lived to tell the tale and are ready to head home, but then in comes Elizabeth Banks, Josh Duhamel and Beezel. Again, embarrassing performances and unfunny jokes abound, but “Beezel” takes it one step further forcing you to choose between a violent yet loving cat and loving yet violent girlfriend.

“Movie 43” is just a disturbingly atrocious failure all around. Forget the fact that a number of performances are over the top fiascos, stars are miscast, the jokes are offensive and unfunny, the sets are distractingly cheap, and there’s a handful of glaringly obvious continuity errors; who in their right mind approved this movie for production? Scripts are beautiful things. You can read them and figure out if you’ve got a good movie before acquiring talent and spending money. Maybe next time the alarmingly large percentage of Hollywood involved in this one will consider that. 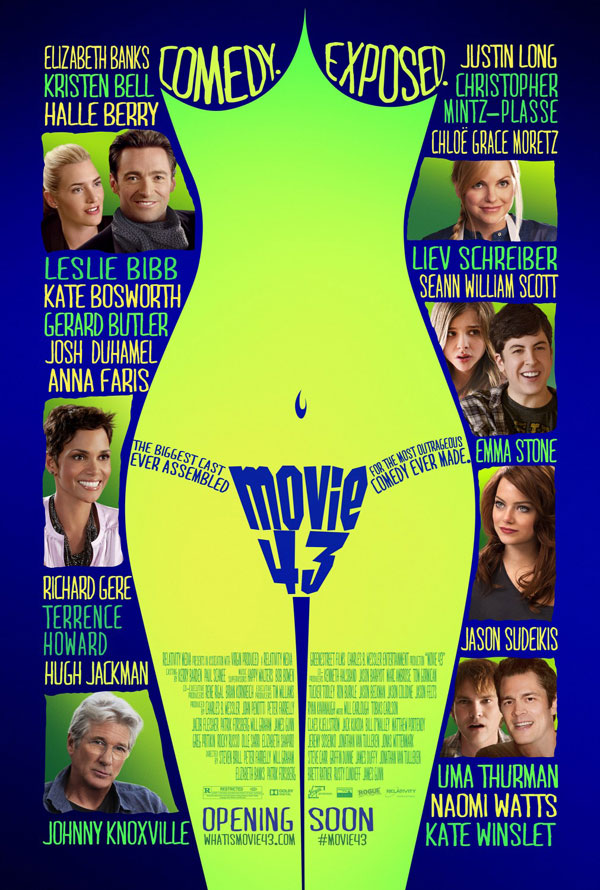