A tack-sharp political drama with satirical underpinnings, “Knife Fight” digs into the characteristic foibles of high-rolling politicians through the point-of-view of campaign operatives, and dissects ego and ambition, idealism and win-at-any-cost pragmatism, but all without succumbing to lazy, armchair cynicism. A collaboration between Oscar-winning director Bill Guttentag and political consultant Chris Lehane, “Knife Fight” is smartly written and superbly cast, and one of the more lithe and entertaining explicitly political films of the new decade — a true movie of the moment that is every bit the look behind closed doors of modern American politics that “The Ides of March” was, but a lot more tonally balanced and laced with an undercurrent of hopefulness.

Media consultant and political strategist Paul Turner (Rob Lowe, crushing a pitch right in his wheelhouse) is a savvy, in-demand figure, juggling work on multiple campaigns from his San Francisco base, the movie’s main setting. He specializes in message management, honed via sharp-elbowed contrast ads and smart if sometimes shady research. Paul’s young and more naive assistant, Kerstin Rhee (Jamie Chung), still isn’t entirely sure of whether or not she wants to commit to this profession. Their two main present gigs are for Kentucky governor Larry Becker (Eric McCormack), facing a tough re-election challenge against a former major league baseball player, and California Senator Stephen Green (David Harbour), a popular war veteran whose incumbency is threatened by a blackmail plot at the hands of a scheming masseuse (Brooke Newton).

As Paul works to feed information through an ambitious reporter, Peaches O’Dell (Julie Bowen), he can’t help tumbling into a “FWB” relationship with her. He also has to contend with the persistence of an idealistic doctor turned would-be gubernatorial candidate, Penelope Nelson (Carrie-Anne Moss), negotiating a labyrinth of strategies and considerations that brings him into contact with his private-eye operative (Richard Schiff), a damaged college student (Amanda Crew) and a powerful network chief (Chris Mulkey) eager to use his airwaves for some political score-settling. (Cameos from the likes of Steve Schmidt and Howard Kurtz help further root matters, as well as a supporting turn from ex-NFL star Eddie George, and a strangely unflattering appearance from Alan Dershowitz, playing if not himself then a similarly shaded stand-in.)

The crispness of its characterizations is what first jumps out at a viewer regarding “Knife Fight.” Each player, no matter how big or small, is imbued with a particular, identifiable motivation or at least world-view, and it’s in the push and pull of this morally grey twilight that the movie unfolds. Paul, who ponders what Machiavelli would do and counsels Kerstin on the outsized personal weaknesses that typically come with outsized political talent, is a brutal adherent to the dictum that the ends justify the means. Part of the beauty of “Knife Fight,” then, is that it forces a personal reckoning upon him without stooping to the calculating, pat ridiculousness of some 180-degree swing in conscience or character. As things go sideways, Paul comes to recognize certain boundaries, and the potential values of at least some moderation. But he does not ignore his experience, or abandon his principles.

Lest that all sound too wonky, “Knife Fight” is a lot of fun, too. While it’s not written or told with quite the same level of exuberant, sometimes over-the-top flourish as “The West Wing” and “The Newsroom,” fans of Aaron Sorkin’s somewhat similarly themed small screen political offerings would be especially advised to seek this film out. Lehane’s political experience (he was press secretary for former vice president Al Gore’s 2000 presidential campaign, among much other work) comes through in the spot-on ads for Becker, Green and their opponents, as well as a myriad of small ways.

And the performances crackle too. Lowe, as rakish and charming as ever, is adept at tough but good-natured characters — slipping a knife into someone’s ribs with a smile. He has a surprisingly engaging rapport with Chung, who is also quite good, and it’s surely a credit to Guttentag — a winner of two Academy Awards for his documentary work — that actresses like Crew and Jennifer Morrison shine in their small roles. Well put together and dinged only a smidge by an ending that could have used a few more smudges, “Knife Fight” puts a lively face on contemporary politicking. That KT Tunstall’s cover version of “Battle Hymn of the Republic” ends things is yet another reminder that certain core American traditions endure, but also always serve themselves up for changes. 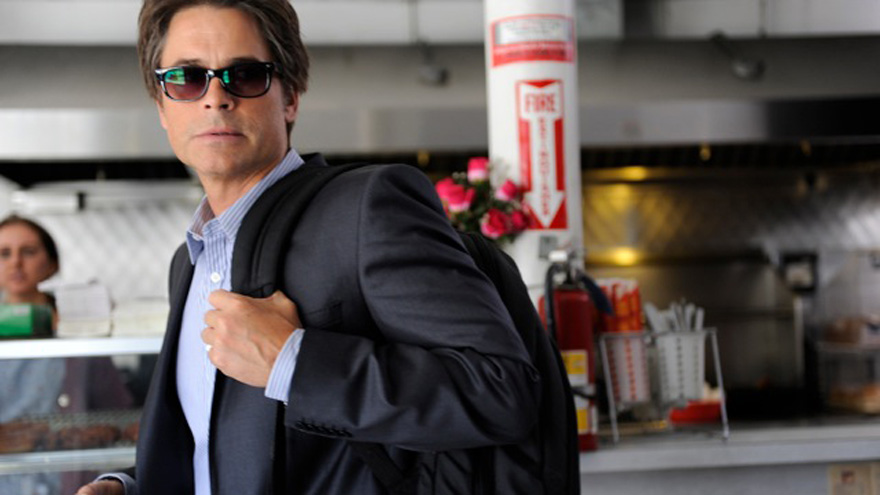