With the premiere of the second season of “Smash” coming soon to NBC, Katherine McPhee fans might be excited to know that more of their favorite actress will be available this February.

Freestyle Digital Media’s “You May Not Kiss the Bride” is set to come out Feb. 5, 2013. The film, starring McPhee along with David Annable (“Brothers and Sisters”), Rob Schneider (“Grown Ups”), Mena Suvari (“American Beauty”) and Kathy Bates (“Midnight in Paris”), involves a pet photographer who somehow becomes the husband to a mobster’s daughter:

“YOU MAY NOT KISS THE BRIDE is a charming tale of adventurous high jinx and budding romance involving an unassuming pet photographer (Annable) who is thrown head first into a series of unforeseeable events when he’s forced to marry a Croatian mobster’s daughter (McPhee) and spend his honeymoon at a secluded Tahitian resort where the bride is kidnapped.”

What do you think about the film? Are you going to supplement your “Smash” watching with this film? Give your opinions in the comments section below. 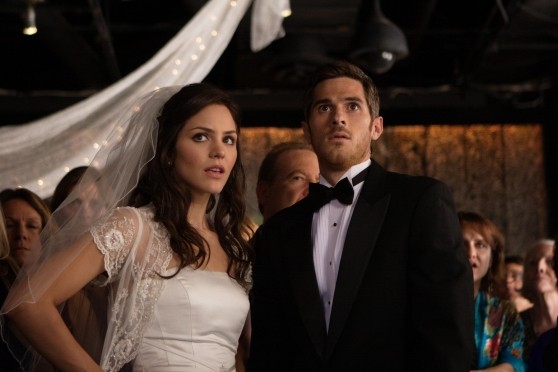 Cancel reply
Interview: The Gatekeepers Director Dror Moreh
New Poster For The Place Beyond The Pines Released
To Top