An All-Star Cast Makes Their Return To Nuke ‘Em High

Troma Entertainment is letting fans know that many of their favorite Troma actors will be featured in the upcoming film, “Return to Nuke ‘Em High Vol. I and II.” Out of all of the actors that have graced Troma’s films throughout it’s 40-year history, here’s who you can expect in “Nuke ‘Em High” (beware a long blockquote ahead):

Retun to Nuke ‘Em High Vo. I and II has fun with sci-fi by turning today’s news on its head:

“‘Return to Nuke ‘Em High Vol. 1 & II’ is a satirical sci-fi comedy event film with themes ripped straight from today’s headlines: the contamination and degradation of the world’s food supply, rampant bullying, and love triumphing over prejudice. The film is in the same vein as other classics such as Class of 1984, Rock ‘n’ Roll High School, and Carrie, but seen through the unique vision of Lloyd Kaufman and the Troma Team.

Welcome to Tromaville High School where, unfortunately, the glee club has mutated into a vicious gang of Cretins. Chrissy and Lauren, two innocent lovers-bloggers, must fight not only the Cretins, mutants and monsters but also the evil Tromorganic Foodstuffs Conglomerate. Will they save Tromaville High School and the world?”

You can learn more about the film at Troma’s official site, the film’s Facebook page and Twitter page. 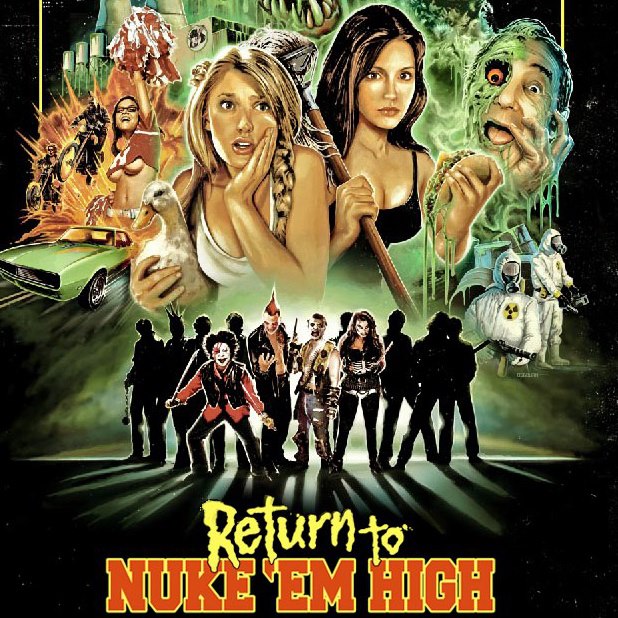