First Steven Soderbergh terrifies us of falling ill with “Contagion” and now he makes us wary of the medication that should make us better with “Side Effects.”

Emily Taylor (Rooney Mara) had it good. She met a kind, handsome guy (Channing Tatum) with a flourishing career; they fell in love, got married and set out to begin a luxurious life filled with wealth and romance. Unfortunately, in an instant, her fairy tale was decimated when her husband was taken away from a lavish Connecticut estate in handcuffs, convicted of insider trading and thrown in prison. A dedicated wife, Emily holds strong, visiting Martin on a regular basis and welcoming him home with open arms after his release.

However, even though she’s thrilled to have him back, the experience is so jarring it stirs up a former issue with depression. Eager to get out of her current funk, Emily starts seeing Dr. Jonathan Banks (Jude Law) who gives her a prescription for a drug called Ablixa. While the pills do brighten her mood, they also cause Emily to get up in the middle of the night, walk around and even cook meals – all in her sleep. Brushed off as a mere side effect, Emily continues the regimen, but when her mid-slumber behavior turns violent, nobody knows who to blame – Dr. Banks, Ablixa or Emily herself.

“Side Effects” starts off with an ingenious core concept and successfully expands upon it, hurling intriguing and conflicting questions the audience’s way. Trouble is, writer Scott Z. Burns just doesn’t know when to stop, incessantly twisting the narrative in every which way until, ultimately, the movie is about something entirely different.

The winning material is primarily what we see in the trailer – Mara becoming the victim of a faulty anti-depressant. Mara and Tatum have no trouble selling the chemistry, so while it’s a thrill to see Martin released from jail and the pair reunite, it’s equally as upsetting when Emily’s condition threatens their happiness. Her mood swings are seemingly unwarranted, so the behavior can grow frustrating, but Emily is aware of that, which is just enough to keep you rooting for her and opens the door for Dr. Banks to step in in the best possible light.

Soderbergh’s jests about prescription medication are immensely amusing and appropriately heavy-handed, but as one of the film’s particularly well-rounded characters, Law manages to plow right through that muck. Dr. Banks is a very likable lead that earns your trust, but Law still leaves just enough room to make you dubious of his decisions, making him the ideal vehicle to introduce you to and help you answer the film’s most perplexing question – who’s responsible? It’s a head spinning scenario, and the fact that you’re already busy rooting for Emily and Martin to live happily ever after and for Dr. Banks to have a nice life with his family adds an emotional stake to the predicament. While pointing the finger at Ablixa seems like the obvious answer, especially for the characters’ sakes, the flack they’re enduring is sadly sensible – especially amidst Soderbergh’s representation of the drug industry.

But even after bringing that scenario to a deeply engaging level with so much left to explore, Soderbergh and Burns opt to wrap that segment up and move on to something almost entirely different, a place where it’s tough not to point a finger at Catherine Zeta-Jones. She steps in as Dr. Erica Siebert, the doctor who treated Emily during her first run-in with depression and helps Dr. Banks get up to speed so he can best treat her this time around. Dr. Siebert suffers from an absolutely outrageous arc, but also quite a bit from Zeta Jones’ performance. Whereas it’s easy to buy the other three famous faces as their characters, Zeta Jones feels like she’s playing dress-up. Dr. Siebert is meant to match Soderbergh’s disturbingly realistic yet heightened drug industry, but Zeta-Jones takes it too far, stripping Dr. Siebert of any human qualities.

Lucky for Zeta Jones, her co-cast, and particularly Mara, are there to stabilize Dr. Siebert as she stumbles. While Mara can slip into that now familiar monotone drone, portraying a character as troubled as Emily with such control is quite the feat. About 85% of “Side Effects” consists of brilliant storytelling brought to life in an alluringly unique fashion, but even when the narrative loses its footing, Mara’s Emily, as erratic as she is, acts as an anchor, keeping the piece cohesive enough to make the entire experience very effective and worthwhile. 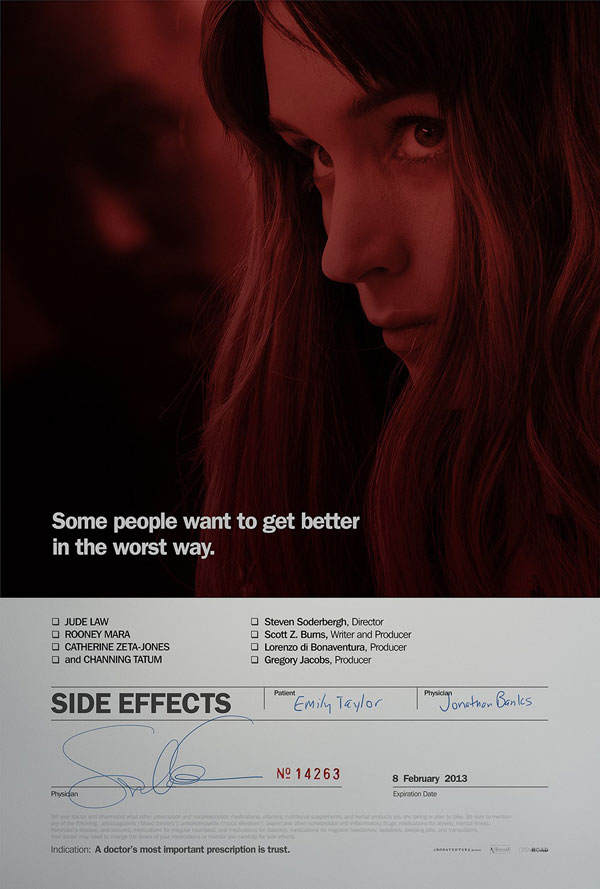