Title: A Glimpse Inside the Mind of Charles Swan III

Crafting a movie around the notion of Charlie Sheen as a louche womanizer experiencing some sort of midlife crisis is hardly the stuff of imaginative brilliance, but as filtered through the prism of Roman Coppola’s mind’s eye, it at least remains intriguing enough to qualify “A Glimpse Inside the Mind of Charles Swan III” as a playful lark. The first starring film project tackled by Sheen after his very open and acrimonious split with CBS and “Two and a Half Men” and subsequent public stint as a drug-addled performance artist, Coppola’s first feature behind the camera since 2001’s “CQ” is a light, and slight, surrealistic comedy of emotional waywardness.

The movie unfolds in a stylized, period-indeterminate Los Angeles. Swan, not unlike Sheen, is a charismatic guy who’s used both his charm and considerable wealth — in this instance from a successful career as a graphic artist — to deflect a lot of his problems but not really solve them. Ergo, he lives in a state of perpetually arrested development, where his eccentricities (Swan owns a toucan and never takes off his filtered sunglasses, even when he shaves) are shruggingly embraced by all around him. When his girlfriend Ivana (Katheryn Winnick) suddenly and angrily breaks off their relationship, however, Swan finds himself caught up in a downward spiral of confusion, self-doubt and reflection.

He’s briefly hospitalized for anxiety, where his visitors include his sister Izzy (Patricia Arquette), his worried accountant Saul (Bill Murray) and his best friend, Kirby Star (Jason Schwartzman), a comedian for whom Swan is overdue on delivery of a cover image for his latest album. Caught up in a tumble-dry cycle of conflicting emotions, Swan eschews advice to move on, and instead sets out to find out what Ivana is up to, and whether you was ever “really” in love with him.

“Charles Swan” isn’t a comedy, per se. Or, that is, it doesn’t really have a lot of jokes written into the dialogue. Its offbeat sense of humor is mostly located in various flight-of-fancy stagings, and the line readings of supporting players. (Some of the former are spun-off flashbacks or acted-out representations of a story being conveyed, while others, like a dance sequence and a cowboys-and-Indians shootout, are elaborate “death fantasies” in which Swan is martyred in front of Ivana.) This nimble style works well in setting up the movie, and certainly keeping one guessing as to where things are going. But it never seems anchored to much of substance, despite the existential panic of its namesake character. Unlike “Silver Linings Playbook,” “Charles Swan” isn’t really deeply invested in the idea of its protagonist having appreciable problems, mental or otherwise. When Kirby advises Swan that Ivana’s discovery of photos of her in a drawer with naked pictures of Swan’s many ex-girlfriends is “textbook, 101-stuff,” it feels like a lazy sitcom joke rather than even the backhand admonition of a fellow cad.

The influence of Coppola’s two writing collaborations with Wes Anderson (“The Darjeeling Limited” and the Oscar-nominated “Moonrise Kingdom”) are very much evident in the film’s rich production design, and it’s this quality — along with an engaging overall visual style — which helps prop up what is otherwise the wan pop- and gender-psychology of a fairly thinly imagined conceit. In addition to his writing and directing duties, Coppola also serves as his own director of photography and camera operator (a tidbit adroitly revealed in the movie’s amusing, celebratory closing credits), and the Zeiss super-speed lenses he uses give “Charles Swan” a distinct visual signature.

Of the supporting players, perhaps unsurprisingly, the impish Schwartzman has the most fun and connects the most roundly, though Winnick is quite solid as well. Sheen’s presence — the very thing which gives the movie so much of its extra-textual cachet — is also restrictive. An actor with less baggage (and a slightly less haggard visage) would have been able to explore the character’s frailties in a way that Sheen can’t muster. As such, “Charles Swan” is a colorful, tossed-off ode to romantic uncertainty, but one that doesn’t leave a mental mark to match its sugary coating. 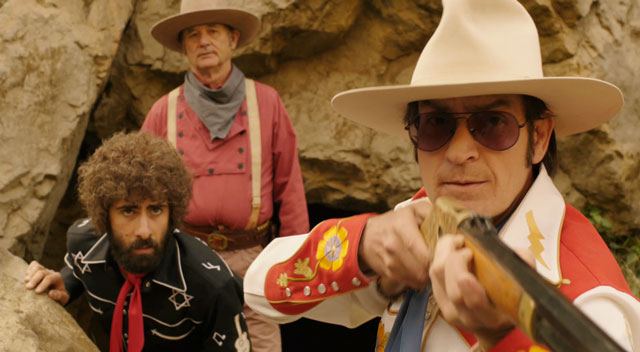