“Warm Bodies” proved that “Twilight” didn’t expire the potential of big screen supernatural romances, but the sub-genre does take a big step back with “Beautiful Creatures.”

Gatlin, South Carolina is home to two kinds of people, the ones that are stupid and the ones that are stuck, and Ethan Wate (Alden Ehrenreich) doesn’t want to be either one of them. But, for the time being, Ethan is involuntarily stuck, stuck in a close-minded religious community living in the past. However, stuck isn’t all that bad once Lena Duchannes (Alice Englert) walks into his life.

Even though Lena is isolated by her classmates courtesy of her vilified lineage, Ethan can’t help but to feel drawn to her. Despite her protests, he wins her over, leaving Lena no choice, but to tell Ethan the truth – she’s not mortal; she’s a caster and on her 16th birthday, her powers will either be claimed for the Dark or the Light, and should they go Dark, Ethan’s life could be at risk.

“Beautiful Creatures” has adaptation written all over it, and poor adaptation at that. The movie is a drag with a running time of two hours and three minutes, but it’s still not enough to get the necessary details across, so it’s a lose-lose.

Things are nice and tidy to start, Ethan painting an amusing picture of Gatlin where folks are so out of touch with the general population that every single girl in town prefaces everything with, “Mama says …” Once we get beyond the basics, the narrative spins in circles, wasting a good deal of screen time making the same points about a failed relationship Ethan had with a particularly snobby girl at school, Emily (Zoey Deutch), something that ultimately amounts to nothing.

But from that point on, the focus is on the heart of the film, Ethan’s relationship with Lena. While Ehrenreich and Englert both put up decent performances and share an adequate amount of chemistry, the arc of their romance doesn’t make much sense. Not only is it tough to buy that a girl once so adamantly opposed to letting this boy into her life would, all of a sudden, become madly in love with him, but the lore attached to their connection is ludicrous. Simply stating a point or providing exposition through a flashback doesn’t necessitate an audience take the information as fact; a movie needs to get a person to believe and “Beautiful Creatures” rarely achieves that.

A major part of the problem is that the large majority of the characters are totally naïve. A mysterious force just blows out the windows of a classroom and nobody questions the cause? People merely blame Lena without ever trying to discuss the power she would hold to make such a thing happen. Then, even though Ethan is smart enough to wonder about such an occurrence, he then conforms to the fact that his new girlfriend is something along the lines of a witch way too easily – and the same goes for most of the film’s major beats.

The plot plays out as though it was constructed for convenience. Lena lets Ethan into her life so the story can advance, Ethan goes along with the caster thing so the story can advance, the villainous Sarafine reveals herself at the opportune time so the story can advance. Yes, every single thing in a movie should propel a story forward, but that forward motion needs to be earned and in the case of “Beautiful Creatures,” everything is deliberately placed and never earned. It distinctly feels as though writer-director Richard LaGravenese plucked certain parts of a larger story and desperately tried to stitch them together, and the film feels disjointed and incomplete because of it.

Then again, that doesn’t mean there’s not a little fun to be had with the film. “Beautiful Creatures” is far form proficient, but sparks of potential are evident. The world itself is quite interesting and would have been engrossing had the details been doled out in an appropriate and sufficient manner. Ethan and Lena’s relationship treads a little too closely to schmaltzy, blind love á la “The Twilight Saga,” but the pair is talented enough to deliver a handful of charming moments, namely Lena’s raincloud temper tantrum. Emmy Rossum almost manages to turn Ridley Duchannes, Lena’s cousin, into a standout villainous, but unfortunately, the character’s arc takes a sharp right towards ineffectual nothing, making anything Rossum accomplishes a fleeting feat.

As for our Oscar winners, Emma Thompson and Jeremy Irons should be 65% embarrassed and 35% proud for letting loose and having some fun. The pair does bring a dose of life to the movie with their over-the-top performances, but, in the end, they amount to little beyond a show of pure silliness. Viola Davis, however, actually manages to turn her character into a real person, one of few in “Beautiful Creatures”. Amma may be on the underdeveloped side, but thanks to some notably natural delivery, when Amma says something, you listen, just like the other characters in the film.

“Beautiful Creatures” does suggest that Kami Garcia and Margaret Stohl’s source material had big screen potential, so the end result is particularly disappointing. Unless the film goes on to earn a surprisingly pretty penny at the box office, “Beautiful Creatures” can kiss its franchise potential goodbye and try to make due with being a barely passable Valentine’s day fling. 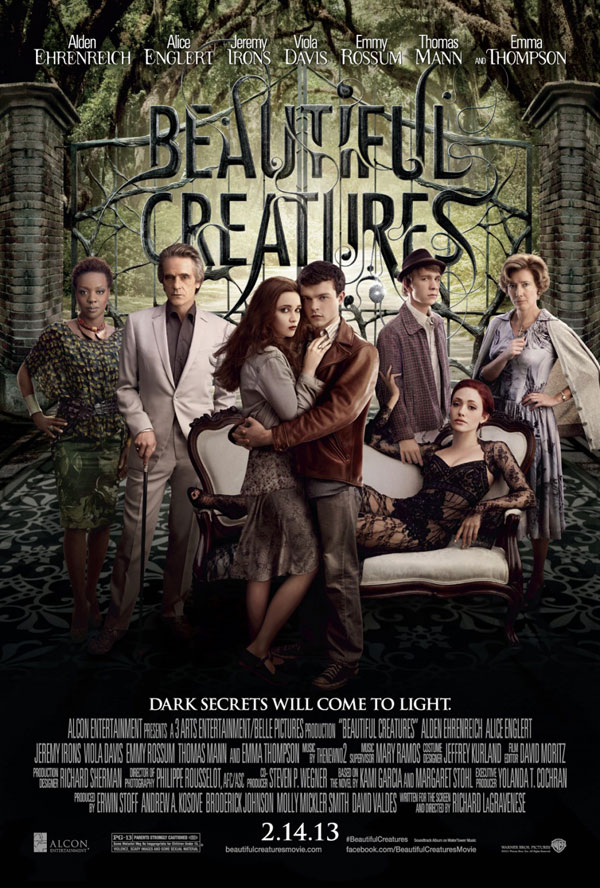