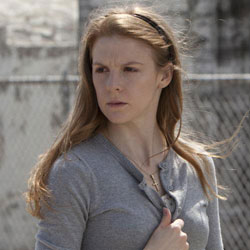 Thanks to her iconic chilling backbend, Ashley Bell’s been permanently engrained in our minds ever since Eli Roth and co. unleashed the very first poster for “The Last Exorcism.” Since, Bell’s been packing on the projects and making quite the name for herself beyond the horror genre, but after “Last Exorcism” hit it so big, how could Bell not return for another dance with the devil?

In “The Last Exorcism Part II” Bell is back as Nell Sweetzer. The story picks up right where the first film left off, Nell being the only survivor of the third act massacre. With her family long gone, Nell is sent to New Orleans to start a new life, however, Abalam isn’t done with her just yet and has no problem relocating from rural Louisiana to the big city to get what he wants.

Stepping back into Nell’s shoes is one thing, but Bell is also responsible for bringing Abalam back to life. Check out what Bell had to say about handling what she calls Nell’s love affair with the devil, the thrill of developing the backbend 2.0, and much more in the interview below, and be sure to catch “The Last Exorcism Part II” when it hits theaters on March 1st.

Are you into horror movies yourself at all?
Ashley Bell: I am into horror movies. My summers growing up were watching horror movies with my dad. I loved everything from “Suspiria” to “Poltergeist” to “Psycho.” I loved the suspense of going into a movie theater and just getting scared, jumping out of my seat and clawing at the person next to me – whether I know them or not! And that’s the kind of film “Part II” is. It’s a really fun, scary movie. I saw it for the first time a couple weeks ago and I actually gave myself nightmares. [Laughs] I even started jumping when I was doing ADR for the film! It’s a lot of fun and it’s got these great jump scares.

What went through your mind approaching “Part II” vs. the first film? You’re very much a lead in round one, but here, you’re as front and center as ever.
This one picks up right where the last one ends. It’s a continuation of Nell Sweetzer’s story. At the end of part one, Nell’s broken. In rebuilding Nell, it was putting together pieces of this Russian doll, and there are pieces missing and in those missing pieces, that’s where the devil’s gonna creep in because that’s where the doubts are gonna be and that’s where things are gonna get scary and manipulative. It was wonderful to step back into my Dr. Martens. I loved building the character of Nell and I also loved building Abalam, the devil. Trying to have his point of view was really exciting as an actress to work on so when I got a chance to go into “Part II,” it was really cool to try to rebuild and piece together this broken, vulnerable girl.

How about your preparation process? Did the change in Nell affect how you prepared to play her in the second film as compared to the first?
Oh, absolutely! When we see Nell at the beginning of this film, she doesn’t remember anything so there was a lot of trying to figure out what she knows, what she doesn’t and then there’s this whole love affair that happens with the devil where it’s almost this dance between them. As she begins to be tempted and teased, we don’t know what part of the world is real, what’s not, what’s manipulation. It was like walking a tightrope building that relationship, which is a very fun place as an actress.

How is it playing these two characters? You’ve got one that’s very tangible, but then this other being that we never really even get to see.
It’s great to build two characters that are almost polar opposites of each other. Here’s Nell who doesn’t’ even know what an iPod is and then dealing with Abalam, it was wonderful for the film to just sink into research. I researched a lot of exorcisms, watched videos. There was also that Nell could be going through a mental breakdown, so I also looked into fits of hysteria and looking at images like that, I got inspired to try some physicality myself and that’s how I found that backbend. Daniel Stamm, the director for the exorcism scene, asked if I had any ideas and I said, ‘Well, I can do this backbend,’ and he said, ‘Okay, you stay there. I’m gonna change some things,’ and I had no idea that would become the poster image for the films and such an iconic pose.

How was it making the switch from found footage to a more standard shooting style? Are you aware of the camera at all when you’re acting?
First of all, when I read the script, I loved that it jumped styles. I thought that was just so cool that Eli Roth and Strike Entertainment did that. Everybody was expecting a found footage “Part II” to happen and it becoming a straight narrative was such a shock to the people and set such a great tone. In filming it, I think you’re always aware of a camera crew on set. You train yourself to not see, but it’s always just about the work and it’s always just about the environment, and that’s what’s so great about working with directors like Daniel Stamm and Ed Gass-Donnelly. They create such a comfortable set to just dive in and play, experiment, be vulnerable, be weird and get scared. That’s a safe, fun set to be on.

How was it going from Daniel to Ed? What is it about Ed’s work here that makes “Part II” his own?
I was a fan of Ed’s film “Small Town Murder Songs.” It’s a beautiful, glossy film that I think he edited, wrote, directed, scored – he did everything for it! It’s really a beautiful film. Working with Ed on “Part II” was great. He really took in the city of New Orleans and let that be a beautiful backdrop for the film. In pre-production, we would walk through the streets and visit voodoo places and pick up trinkets, little beads or talismans. He really wanted to give the exorcisms that are going to be going on in this film a voodoo edge, a very New Orleans edge, something different. It’s something audiences haven’t seen before.

How is he as an actor’s director? Does he like to rehearse or give you notes while you’re filming?
He has a huge background in theater, so it was really wonderful to work with him. One of my favorite days of filming, if you’ve seen the trailer, to one-up the backbend there’s this levitating backbend. It was all me, that was important, so I got clearance from the stunt crew to do it eight times and of course we were all having so much fun, it went on like 16 or 20 times, and each time we added something new, we added a different element, we added a different color. Building it like that was so much fun. While I would be in the center, going up into this stunt, it was a whole production on set. Everybody from props, the camera guys and all the actors – Ed conducted it like an orchestra and it was really fun to play those moments.

How is that for you? Clearly you’re flexible and are just able to do the backbend, but how does throwing in the levitation affect it from a physical standpoint?
I taught myself how to levitate, which was very tricky. Kidding. [Laughs] It was tricky. I was thrilled to be able to do it, but there was a physical therapist on set in between takes that would have to pop my shoulder blades out. It was handled very carefully and the bed was heated so I could hyperextend and everything like that. I actually have a stress fracture to prove it. I think I got a stress fracture from doing that. I went to a doctor afterwards and he said, ‘Have you been doing any gymnastics or any hyper extending or backbends? You have a stress fracture in your lower vertebrate.’ I said, ‘Well, one thing comes to mind!’ [Laughs] It’s an occupational hazard of being possessed by the devil.

Now is that the most challenging scene for you or was there something else that was tougher to film? Or perhaps even just a scene you’re particularly proud of?
Oh, I think that was the most challenging and the most fulfilling scene. I did like that scene a lot. This film has a huge exorcism scene that ends with a turn that truly only Eli Roth could pull off. I think audiences are gonna be very, very shocked when they see it. The exorcism scene for this one took, I think, two days to film and it was very exciting to be in the middle of all that. Everything has been demanding emotionally, physically, mentally, and vocally. It’s wonderful to be challenged as an actress like that. It’s really what’s fun about doing my job.

Do you take any of that home with you? Does having been so entrenched in a scene like that keep you up at night?
No, otherwise I would really need an exorcist! I could probably find one in New Orleans. [Laughs] No, I was able to leave it on set. Between my training and also the atmosphere on set, it made it possible to jump in and out of character. I knew what would be coming up that day so I would prepare and let it all out on set.

And now we don’t want to get ahead of ourselves, but what do you think about doing a “Part III?” Is there more of Nell you’d like to explore?
Yes. Always. Evil has no boundaries! Finding a whole new dimension to Nell for “Part II” was really exciting to play and develop, and I would love to go back into my Dr. Martens again for a “Part III.” I always think there’s another dance with the devil.

How about beyond “Last Exorcism?” What else do you have coming up?
I have a bunch of stuff coming out! I have a romantic comedy coming out called “The Bounceback,” which is premiering at SXSW. I have “The Marine,” which is an action film coming out March 5th. I have a romantic epic called “Chasing Shakespeare.” It’s like a period piece, also premiering at SXSW and “Sparks,” an action film based on the graphic comic, which will be premiering at Cinequest Film Festival. And the cherry on top is “The Last Exorcism Part II!”

That’s quite the assortment there! Having worked on so many different kinds of films, is there anything you haven’t done yet that you’re dying to do?
I love exploring a period piece like “Chasing Shakespeare.” The only thing is, we didn’t go deep into period. It was 1970s. I was in all the flashbacks of a New York Shakespearian actress in the 70s, so I would love to do some classical period piece or a costume drama or something to transform in that way. That would be very fun to do. That’s always been a dream of mine.