Cop movies are a dime a dozen these days. It’s become almost more commonplace to see morally corrupt officers of the law acting in their own best interests than seeing them protect the public. Like the current trend in Hollywood, the idea is to keep them in-tuned with reality. They’re stylistically gritty and usually the director attempts to inject the film with some sense of ambiguity so that we can still sympathize with the characters in spite of their flaws. But is it ever that easy? Even some half-baked philosophy about morality and the touchstones of what constitutes a human being could theoretically become routine and a parody in and of itself. The Sweeney is exactly that. Director Nick Love struggles with balancing a gritty cop drama (that might be trying just a little too hard to please fans of the cop drama) and a romance between stars Ray Winstone and Hayley Atwell. Both routes take a toll on one another, causing this UK cop drama to slog and creak to the bloody finale.

Ray Winstone brings his usual tenacity and even a little braggadocio as DI Jack Regan. He’s the head of a division in the police force commonly referred to as “The Sweeney”. Regan could most likely be compared to the likes of Detective Vic Mackey from The Shield, whose violent and unpredictable protagonist stormed the streets of Los Angeles with a fiery, reckless abandon. He is accompanied by Nancy Lewis (Atwell), who is his love interest. Lewis is sadly underdeveloped as a character. She seems to be inserted into the plot for the sake of a romance that’s more melodramatic than authentic (what exactly does she find so attractive about Jack?). Unfortunately, his love interest also happens to be married to DCI Ivan Lewis (Steven Mackintosh). Regan is also a mentor of sorts to George Carter (Ben Drew). Drew carries his own weight with a surprisingly solid performance that doesn’t quite match the ferocity of his counterpart, but nevertheless keeps the audience involved.

One of the biggest issues with The Sweeney is its uncanny resemblance to a CSI episode (only located in England) mashed up with a desire to be Michael Mann. It could be that because it’s based on a TV show from the 70’s, it still wears its roots proudly on its tough-guy, renegade cop suit sleeve, or it could be that director Nick Love approached it from the standpoint of a standard cop-thriller with no higher ambitions. Love mishandles a relationship that doesn’t seem to spark any real life of its own. It feels clumsy and artificial and doesn’t really push the story forward. While their relationship is under heavy strain due to the job at hand, which involves a series of high- profile robberies, the actual drama isn’t thrilling and utterly predictable. Fortunately, there are some really solid action (one very extensive bank shoot-out that might overstay its welcome ever so slightly) set pieces that truly shine in this procedural cop drama.

You might find it odd that I didn’t bother to sum up much of the plot. This is because there isn’t much of one. Much of the drama is within The Sweeney department, where DCI Lewis is doing everything in his power to shut down said division. Lewis finds Regan’s methods crass, brutish and unnecessary despite Jack’s accomplished history with getting results. Of course his wife, Nancy, having an affair with Jack has a lot to do with it as well. Regardless, The Sweeney is stuck in between trying to do two separate things–neither one of them working, either. Whether it be from a plot standpoint or a character one, it can’t focus enough to truly earn the ending that it gets. Director Nick Love is skilled behind the camera, there’s no doubt about that, but his sense of storytelling is lacking. There was enough talent in this film to make it more than watchable, but sadly I caught myself looking at my watch more than once. Truly a missed opportunity. 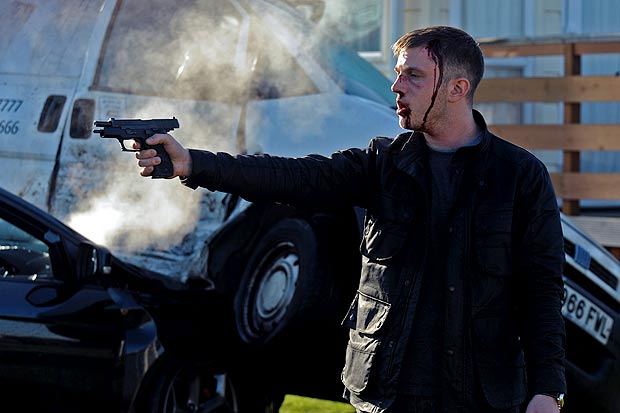