DARK SKIES starts out as a fairly standard haunted house film with a sci-fi alien paranormal twist and slowly reveals itself to actually be a teen angst movie in disguise. The movie is sufficiently eerie and well shot, successfully delivering all the uneasy music cues  and scares to be expected in a Jason Blum (PARANORMAL ACTIVITY, SINISTER) produced film, along with the typical set up of a seemingly normal suburban home that happens to a house a family being plagued by a barrage of unexplained spooky things, complete with a small creepy kid and vaguely plausible reasons to install home video cameras throughout the house.

There a few jumps and creepy moments, but the biggest surprise is discovering the major underlying plot of the movie involves an older teenage son who, in the trailers, goes almost completely unnoticed.  The movie explores teen tropes like first experiences with girls, getting high, discovering pornography, and hanging out with older kids that parents think are the wrong kind of crowd, and twists them. The regular trials of growing up get more complicated as attention is turned to a younger sibling that has recently become the victim of mysterious abuse, and the brother finds himself  finds himself dealing with the stigma of being from a family under scrutiny.

The unwelcome visits and escalating intrusive harm being caused by the nightly strangers the children nickname “The Sandman” including the appearance of weird markings all over their bodies that prompt concerned family friends and doctors to seek intervention from Child Protective Services over, give the alien aspect of the movie a creepy uncomfortable I-won’t-tell-mommy overtone.  Sadly, the weak script leaves a film with a much more trite agenda and huge plot holes that isn’t smart enough to carry enough weight to provide any real look into the themes it brings up.

The script is filled with telegraphed plot devices that seem phoned in and uninspired, plodding along from check-boxed scene to the next.  The characters don’t come off as particularly likeable, even J.K. Simmons’ performance is wasted in a flat role as a conspiracy theorist that seems tacked on to bridge exposition.

There’s a lot of wasted screen time spent on fairly mundane household turmoils stemming from the fact the somewhat tactless husband character can’t land another upper-middle class job as an architect right away after being laid off and is forced to spend his days at home finding ways to dismissively disappoint his working wife and fall asleep in his clothes, and still be too busy to connect with his children. If you enjoy watching men slump uncomfortably through job interviews, psych-out dream sequences, people printing out and recapping information found through Google search, and shadowy figures shuffling around the house eating out of garbage cans then you are in for a good time.

DARK SKIES is a competently middling movie with some lazy choices going on that disappointingly doesn’t live up to its potential. If you’re content with more of the same from Jason Blum then see it, you’ll get what you pay for but don’t expect too much more. 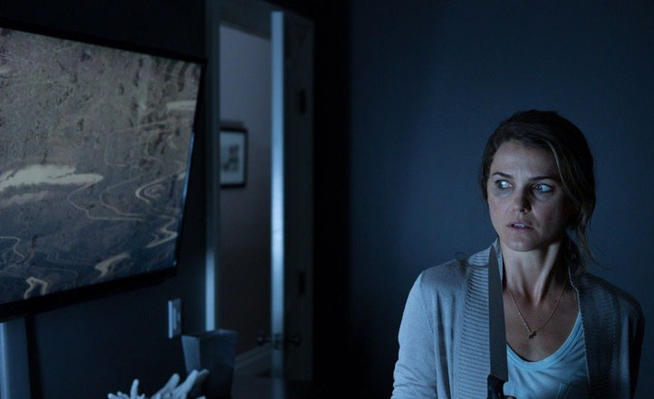