When General Douglas MacArthur was fired by President Harry S. Truman in 1951, the U.S. was split. Some agreed with the general that more aggressive actions should be taken during the Korean War, including what MacArthur wanted, the bombing of Manchuria. Others in our country—including many senior officials in government who were presumably more in the know about the potential for World War III if MacArthur’s plans were approved—were relived at his dismissal. Who revered MacArthur the most? The 69% of Americans who liked the man’s aggressiveness, some of whom burned Truman in effigy? No. Surprisingly, it was the Japanese—who lined the route to Haneda airport in April of 1951 to give the great man a tearful goodbye.

The Japanese? Surprisingly enough, the people who launched brutal warfare against the U.S. for four years practically worshipped the man just as they had bowed to the semi-divine Emperor Hirohito because MacArthur, rather than ask President Truman to string the monarch up for his role in allegedly pushing for the Pearl Harbor attack, recommended that he not be tried as a war criminal. Fearing renewed warfare and a communist revolution should Hirohito be treated like Prime Minister Hideki Tojo—who was hanged as a war criminal—MacArthur convinced our president to let the man live, even thrive, seeking his help to rebuild Japan. As a result of this kid-gloves treatment during the American occupation of the defeated nation, Japan is among our most dedicated allies.

Who was behind MacArthur’s decision to take things easy with the emperor? That’s the aim of Peter Webber in directing “Emperor,” partly a romance because that’s what brings in box office, and because the love of a Japanese woman affected the beliefs of one of MacArthur’s chief advisers in 1945. “Emperor” is, most of all, a look not so much at MacArthur as it is a partly fictionalized view of General Bonner Fellers (Matthew Fox) who, with his granite bearing in this bit of cinematic historical fiction looks as though he had just arrived from the set of “Mad Men” and had zipped down to New Zealand to take part in this pic.

Director Peter Webber, whose “Girl with a Pearl Earring” takes a look at a young peasant maid who became a model for Johannes Vermeer, is strangely enough in his métier again despite the differences between this film and the one about a 17th Century artist, since both societies had been given over to repression. Vermeer and the maid feared even touching their hands together, an act that in their day could mean only that the woman is cheap. Emperor Hirohito’s society was so repressed that shaking his hand would be an unpardonable sin, considering that even looking him in the eye would be considered sacrilege.

When compared with events in Webber’s depiction of 17th Century paintings, “Emperor” is virtually current events as the story unfolds as recently as 1945, just after Japan’s agreement to surrender or, as the title character would say, “to accept the intolerable.” General MacArthur (Tommy Lee Jones), knowing that General Fellers had good reason to love Japan, assigned him the job of researching Hirohito’s role in starting the war. It’s not enough, mused he—or rather the voters in the U.S. thought—that the emperor urged surrender. If it could be shown that he was instrumental in ordering the attack on Pearl Harbor, he could be indicted as a war criminal and probably hanged.

Fellers, not realizing that MacArthur had no intention of stringing up the emperor because of the blowback such a drastic policy would bring, spends most of the movie using the ten-day period to interview higher-ups who might know of the emperor’s intentions, but not without spending a good part of the assignment day-dreaming about his relationship with Aya (Eriko Hatsune), whom he met in a U.S. college. Pursuing the lass in Japan in 1940 while war clouds were ascending, he is put off by her resistance to him despite their obvious attraction, because her father had advised her not to marry an American. When he is not dreaming of his loved one, having assigned an assistant to look for her, he spends time getting beaten up when strangely enough he had been patronizing a local bar for noodle soup and alcohol or having rocks thrown at him in the street by some young delinquents. Ultimately, what we already know from our history class results in the exoneration of Hirohito and the entire staff at the Tokyo Palace, but Fellers is more interested in finding the love of his life.

The acting is on the stiff side, perhaps because Japan at the time (before it was Americanized with baseball and Mickey D’s) was a stiff place, though its custom of bowing rather than shaking hands is to this day an advantage in warding off potential colds and flu allowing its residents instead to succumb of stomach problems from its raw fish diet. Though Tommy Lee Jones is given prime visuals in the ads, this movie belongs to Matthew Fox, heretofore known principally for TV series but impressively enough in Pete Travis’s 2008 movie “Vantage Point,”about the attempted assassination of an American president told from different points of view. Director Webber is concerned equally with the love story as with the politics of occupation in its first year, and in that former ambition largely succeeds in developing as much chemistry as a Japanese woman in real life might allow at the time, and in the latter does get inside the heads of the higher-ups. We see that MacArthur is using his job of Supreme Commander of the Allied Forces as a steppingstone to the presidency, an ambition ultimately foiled when he got too much enamored with war games during the Korean police action. The film does provide some political conflict points that might make us think of what our 16th president went through to get his 13th Amendment passed in Steven Spielberg’s “Lincoln,” but then of course handsome but stiff Matthew Fox is no Daniel Day-Lewis. 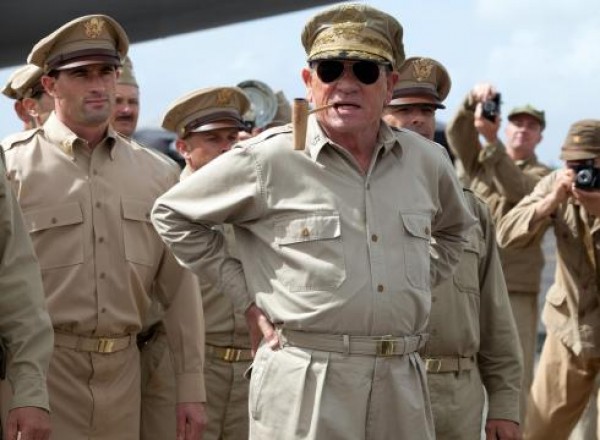