Tim Burton hit it big with “Alice in Wonderland,” but the fairy tale-to-film effort is still a horrifyingly expensive crapshoot.

As children, both Jack and Isabelle took a liking to the legend of the giants of Gantua. However, now young adults, neither is remotely close to achieving any degree of adventure, Jack (Nicholas Hoult) stuck working on his uncle’s farm and Isabelle (Eleanor Tomlinson) forced to be a proper princess, staying within the walls of Cloisters. However, after a mix-up at the market, Jack accidently winds up with a sack full of magic beans. Coincidentally, later that evening, Isabelle opts to sneak out of the castle and winds up at Jack’s door seeking shelter from a storm. Little does Jack know, one of his beans slipped through the house’s floorboards, right along with the rainwater that triggers them to grow.

After a failed attempt at saving Isabelle, she’s lifted up into the land of the giants while Jack comes crashing back down to Earth. When King Brahmwell (Ian McShane) hears of what’s happened to his daughter, he commissions Elmont (Ewan McGregor), the leader of the king’s guard, and his men to scale the beanstalk with Jack in tow to bring Isabelle home.

“Jack the Giant Slayer” is very straightforward – lowly farmhand falls for a princess and goes on an adventure to rescue her. The script does come with finer details, but it’s the appeal of this grand scale, magic quest that gives “Jack” the power to entertain.

A good deal of the narrative revolves around the fact that the legend of the giants is wildly accepted as myth, but with all tellings ending with the jest, or is it? “Jack” sets the tone right from the start by jumping back and forth between identical bedtime stories, one for Jack from his father and the other for Isabelle from her mother. The live action material is paired with a cartoon version of the myth – far less advanced than the digital giants our heroes encounter in the flesh. This lighthearted, enchanting start makes for the ideal and very necessary bridge between reality and the world this movie aims to make feel real because the characters most certainly do not.

Jack, Isabelle and co. are all fairytale caricatures. Hoult does share a believable amount of chemistry with Tomlinson and even Tomlinson manages to make you believe there’s an honest connection between Isabelle and her closest guards, but it’s all nothing more than a front. Why is Jack drawn to Isabelle? It’s got to be because she’s pretty because she doesn’t do anything to earn his honor and affection. Elmont is a dedicated soldier and nothing more, and the same goes for McShane; Brahmwell takes care of his subjects and loves his daughter. Unless Jack conquered his fear of heights for good during his trip, not a single character experiences much of an arc. They’re all the same people in the end; they just happened to have battled a horde of invading giants.

But this is a massive, fantastical, CGI romp we’re talking about; who’s seeing it for the sake of character development or even a wholly believable narrative for that matter? It’s about the fun of the adventure and the spectacle of this magical world, and, in that sense, “Jack the Giant Slayer” delivers.

Again, no layers to any of the characters on the giants’ side of the battle either, but this brigade of monsters is so finely detailed, within minutes you can identify a handful courtesy of striking traits and, while doing so, figure out where they fall in the giant hierarchy. There’s little to no logic to that hierarchy considering the giants themselves seem awfully confused about who to follow, but they’re still nice to look at, particularly in the heat of battle. The choice to go the motion capture route results in some wildly realistic movements, and quite a few that work wonders in blending the digital elements with the live action portions of the piece.

Is it worth the film’s exorbitant production budget? Absolutely not, but even sprucing up the script a bit might not have fixed the problem. The appeal of “Jack the Giant Slayer” comes from the simplicity of the story and the chance to just sit back and enjoy an upbeat adventure. Had the characters been burdened with too many details, it undoubtedly would have dampened the experience. Similar to “Alice in Wonderland,” it comes down to the spectacle more than anything and even though Singer’s work lacks the flair of Burton’s, a more defined tale and more charismatic characters make “Jack” the more enjoyable ride. 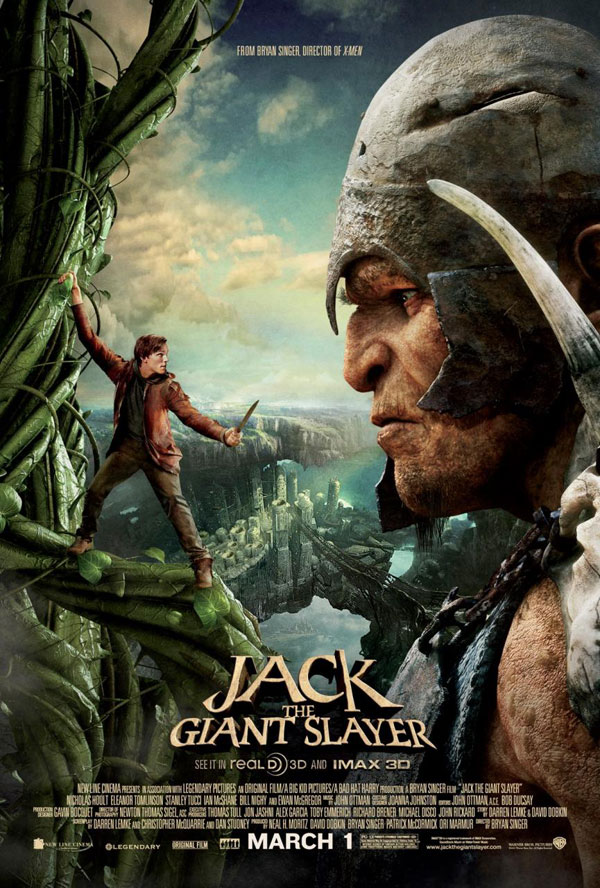 Cancel reply
Interview: The Cast and Crew Talk About A Place at the Table
Interview: Matthew Goode Talks About His Role in Stoker
To Top